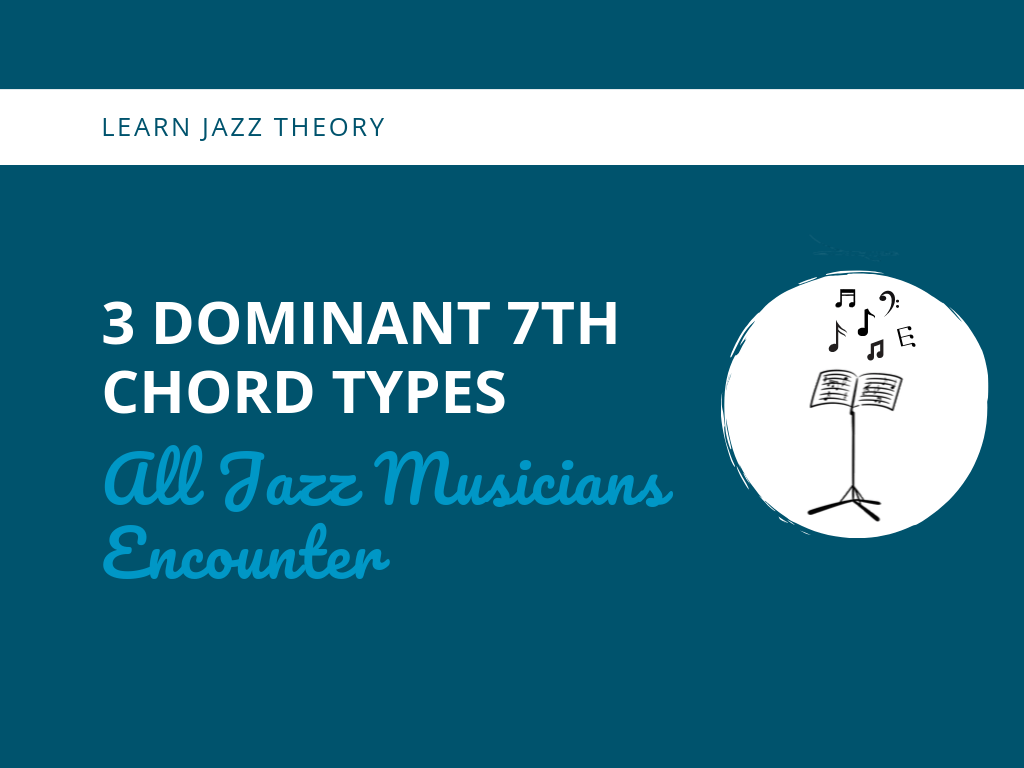 Knowing the strongest scale options implied by the different types of dominant seventh chords can equip you with tools which will help you generate musical vocabulary and inspire your fingers, ears, and mind as you construct melodies while improvising.

This is likely review for most jazz musicians, but it’s always helpful to make sure we have our basics covered before moving on so we’re all on the same page with the meanings and usages of the specific terms I’ll use in this post. We’ll look at the chords from a few different perspectives, and hopefully one of these methods will resonate with the way you hear and think about these chords.

A basic dominant seventh chord (with no extensions – i.e. no 9ths, 11ths, or 13ths) can be thought of a few different ways:

It’s the chord you get if you build a diatonic seventh chord starting from the 5th note of the major mode.

The name “dominant” comes from classical music theory. In the classical world, the chord built from the root or the 1st note of the major scale is referred to as the “tonic” chord – the “I” chord. The chord built from the 5th scale degree of the major mode is called the “dominant” – the V chord (I’ve heard it said that it’s called the “dominant” chord because it’s the second most common chord in tonal music after the I chord).

So, for example, in the key of C major, the 5th scale degree – the dominant – is G. If you stack diatonic 3rds (meaning notes derived from the key of C major) on top of G to build a seventh chord, you end up with G7 (G, B, D, F natural).

A dominant seventh chord is a major triad with an added lowered seventh (a b7) above the root of the chord.

Note: the “lowered” seventh is in comparison to a “major” or “natural” seventh. For example, the “natural” or “major” seventh above G is F#, so F natural is the lowered or b7 – so, with this method, you start with a G major triad (G, B, D) and add a b7 – F natural.

A dominant seventh chord can be defined purely in terms of stacked thirds. You start with the chord in root position – with the root of the chord as the bass note/lowest note, and stack thirds – first a major third, followed by two minor thirds.

In the most generic terms, a dominant seventh chord, regardless of its extensions, can be defined as:

A basic 7th chord includes the root, 3rd, 5th, and 7th, but even the most basic modern jazz voicings often include 9ths, 11ths, and/or 13ths in most chords. Here are some diatonic extended dominant seventh chords:

Early jazz musicians and pre-swing era players such as “Jelly Roll” Morton and Bix Beiderbecke were already exploring more colorful harmonies with extended chords, but more complex jazz harmony really took off by the time composers such as Duke Ellington came along in the big band era.

As jazz’s harmonic vocabulary continued to expand and develop in the late swing era (roughly in the late 1930s), jazz musicians who spearheaded the movement we now call bebop began exploiting and altering the more “colorful” extensions of chords, especially 9ths and 13ths. Bebop musicians especially famously began exploiting and altering the extensions of chords in jazz harmony.

One of the two most common types of alterations to upper extensions involves only raising the 11th to get a dominant 7(#11) chord.

This is a harmonic maneuver which probably came from the influence of French Impressionistic composers such as Claude Debussy had on jazz musicians (for just one example, listen to Debussy’s Images and note the harmonic similarities between his writing and the piano music of Bix Beiderbecke and Thelonious Monk).

A third is to imagine this chord is as a slash chord or a polychord – it’s essentially an A major triad on top of a basic G7 chord. Here are some dominant 7(#11) chords notated: 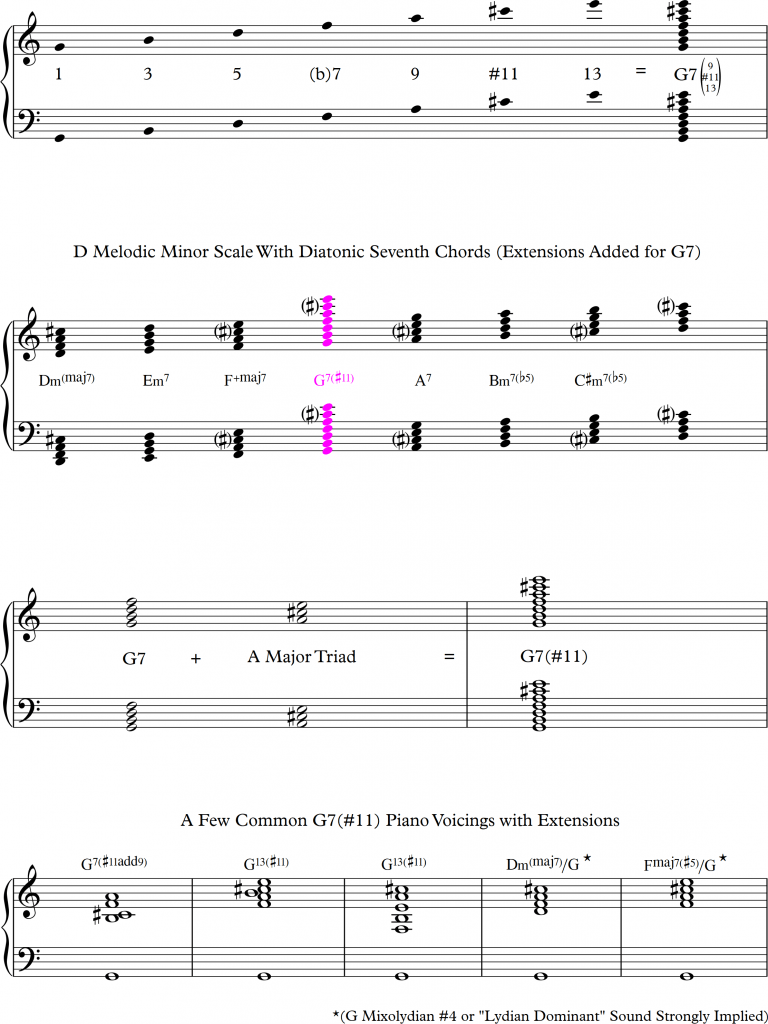 The other alterations involve using some combination of lowered and/or raised 9ths, a raised 11th and/or a lowered or natural 13th. Here are a few possibilities with specific chord voicings.

Tonality and the Dominant Seventh Chord

It’s important to note that there is a tritone between the major 3rd and flatted 7th of a dominant seventh chord. This interval relationship helps define the quality of the chord, and it is traditionally viewed as creating tension according to classical music’s theoretical conventions.

This tension is what helps create and define tonality, since the resolution of the tritone during a V7-I harmonic progression is what creates the sense of gravity, inevitably, and “homecoming” (i.e. tension and release) of a V7-I chord progression.

For tonality to be functional melodically and harmonically, you have to have a leading tone as the 7th scale degree (in other words, the 7th note of the scale has to be a major 7th above the root, or a half-step below the tonic – however, you want to visualize it). This is because, in the briefest and simplest terms possible, tonality is essentially defined by the V7-I cadential relationship, which lives and dies on the resolution of the “tension” inherent in the tritone.

The complicated thing about jazz harmony is that some of jazz’s harmonic vocabulary is borrowed from or influenced by classical music, and some of it directly defies classical music’s conventions.

For example, many of Thelonious Monk’s compositions feature dominant seventh chords that do not resolve with the root moving up a perfect 4th or down a perfect 5th (for a just a few examples, see his compositions “Ask Me Now,” “Well You Needn’t,” and “I Mean You”).

So our task as jazz musicians is to identify what type of dominant seventh we’re dealing with and where it’s resolving, because these facts will influence the function of the chord and therefore affect how we approach improvising over it.

The 3 Most Common Flavors of Dominant Seventh Chords

Now that we have all of that background information covered, let’s break these various types of dominant seventh chords into three major categories or “flavors” based on their function:

1. Fully diatonic seventh chords with no alterations (regardless of where they resolve)

2. Partially altered seventh chords that don’t resolve V7-I (i.e. with the root movement up a 4th or down a 5th)

You basically have a handful of scale choices, and the scale choice will depend on a combination of the specific alterations indicated by the chord symbol and/or what the melody of the song suggests, if you want to stick close to the original suggested harmony of the composition. Here are your scale options:

Here are all the scales I’ve discussed notated: 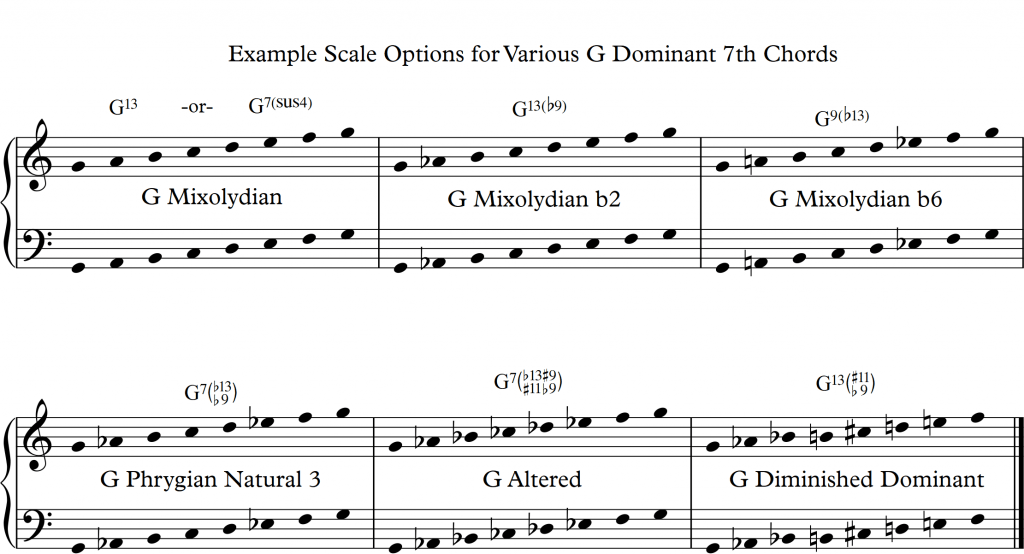 And here are additional scale choice options and my suggestions for voicing out dominant 7th chords on a chordal instrument:

This is an important distinction because the quality of the 13th might suggest a different scale that fits best with it: dominant 7(b9, b13) strongly implies the altered scale [the 7th mode of melodic minor – so C# melodic minor played from C for C7(b9,b13)], whereas 7(b9, 13) with a natural 13 more strongly implies the diminished scale starting with a half step (or perhaps even Mixolydian b2). So when you’re comping a tune and the quality of the 13th of a 7(b9) chord is not super clear to begin with, I would err on the side of leaving out the 13th from your voicings altogether so that the improviser can make the scale choices they want without potentially clashing with the chordal accompaniment.

If you happen to hear which option the improviser is using, you can of course then go to a voicing which supports that option. And of course vice versa, if a chordal instrument does play a 13th in the voicing, the improviser can pick the scale that fits the voicing best if the improviser’s is listening carefully and has the ability to distinguish between the various upper structure options for 7(b9) chords.