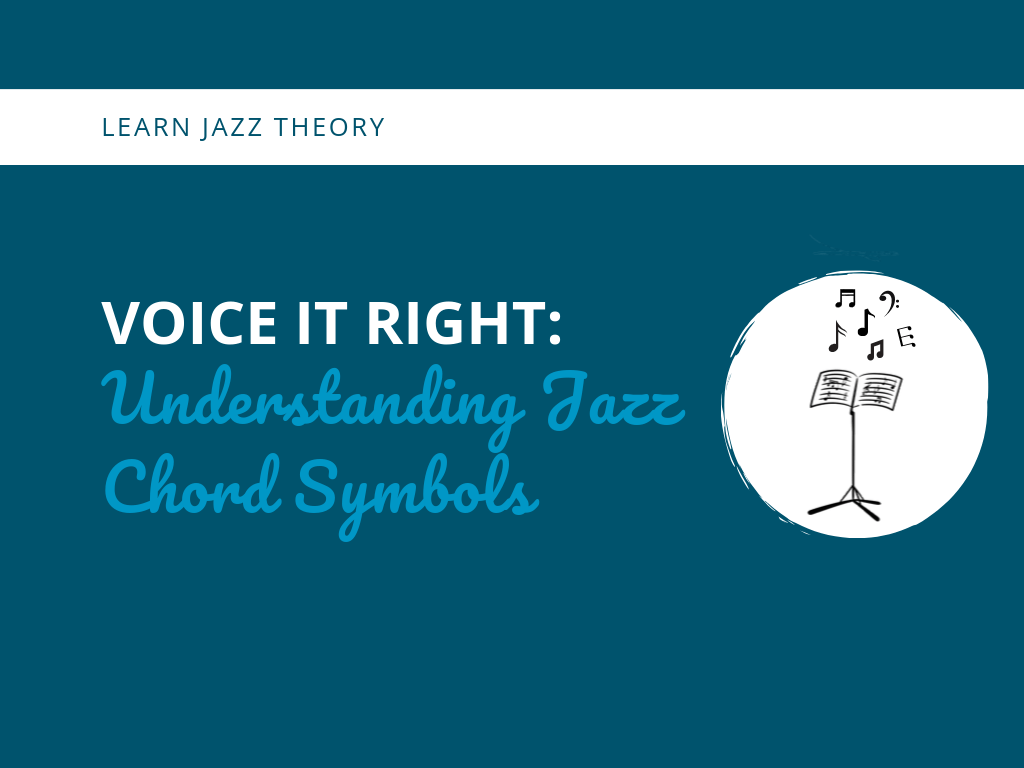 In my time as a jazz musician, I’ve discovered that there is sometimes confusion regarding how to notate and interpret chord symbols. It’s a significant problem in the jazz world, and one that I want to address here. I hope that sharing my understanding and interpretation of chord symbols with you is useful and can help dispel some of the confusion surrounding jazz chord symbols.

Part of the underlying set of issues here is that the term jazz embraces a wide variety of musical styles from many different historical periods. Additionally, jazz started out as a primarily aural/oral (an “ear” or “illiterate”) tradition, and when jazz was first written down using music notation, musicians basically adopted the notation traditions associated with European classical music, which proved inadequate to the task in many ways.

When Western music notation didn’t have a way to notate something, many jazz musicians either simply didn’t notate it, or they invented their own system for how to notate it, which eventually lead to various schools of thought about notating jazz music and varying degrees of specificity in notated jazz compositions.

Further, the complicated reality of jazz both sonically and historically means that much of jazz theory and jazz’s musical notation have been put together somewhat haphazardly after the fact.

The resulting situation that all jazz musicians are aware of is that even the most detailed written scores, lead, sheets, and transcriptions of jazz music are notoriously imprecise and insufficient to capture what the music is sonically. Jazz music has thrived on innovation, and theorizing, explaining, and notating the music generally always lags behind actual performance practice.

There is so much nuance in jazz musicians’ approaches to bending notes, dynamically and timbrally shaping melodies, playing swung rhythms, experimenting around with the time feel, revoicing chords, etc., that it is nearly impossible to accurately capture what’s going on in a jazz performance with written music notation alone.

If you have any doubt about this, just try listening to any interpretation of a jazz standard while following along with a lead sheet for the tune you’re listening to. You will very quickly discover the discrepancies between what you hear in the music and what’s notated on the page. Obviously, lead sheets are extremely simplified and generic examples of notated jazz music and therefore are an easy target to criticize for being vague.

In fact, a lot of people might argue that the whole point of a lead sheet is to be intentionally vague and condensed so that it is short, simple, easy to read, and open to varied interpretations.

Bu regardless of how or why lead sheets are notated the way that they are, they are extremely common in jazz culture for a good reason, namely because they are valuable tools. Lead sheets can help us quickly learn, perform, and disseminate jazz’s standard repertoire of songs. But because jazz is so diverse and there are so many different schools of thought about how to notate, talk about, and explain jazz theory, we have the unfortunate situation where there is no clearly codified or standardized way to notate jazz music on lead sheets.

This is especially a noticeable problem when it comes to lead sheets, and it’s particularly obvious that there are many different and sometimes conflicting ways of notating jazz music’s harmonic progressions using chord symbols. If you peruse a few different versions of the many “Fake Books” and/or “Real Books” out there, you’ll quickly see that there are many contrasting ways to notate jazz harmony using chord symbols. Some chord symbols are very simple and generic looking, and others are much more specific, detailed, and complex.

With all this in mind, here’s how I’ve come to understand and interpret chord symbols as they appear in their various forms, and I hope this helps you navigate the sometimes confusing world of notated jazz compositions.

Jazz musicians very rarely play triads by themselves (except perhaps in the very earliest jazz styles, such as traditional New Orleans style jazz), so most of the harmonic vocabulary of jazz music is based around 7th chords and 7th chord upper structures over different bass notes (which is just another way of thinking about extended chords, or chords with 9ths, 11ths, 13ths, etc. – more on that below).

This is problematic, because in most contexts outside of jazz if a musician sees a chord symbol that is simple (like “C” or “C-“), they will interpret that to mean a basic triad (C major and C minor triads, respectively). For the sake of simplicity, some jazz musicians just write “C” as a chord symbol when they mean “Cmaj.7” – and similarly, some older charts and lead sheet will write just “C” when they actually want something more like “Cmaj.6.”

Even when a lead sheet does specify a chord symbol with more information such as “Cmaj.7,” of course a jazz musician rarely even takes this literally. Most players will automatically include at least one extension in most of their basic jazz voicings (such as a 9th or 13th over a major 7th chord, more on that below).

To further complicate matters, as jazz harmony has generally continually become more complex since the swing era, and as jazz theory and jazz education have steadily grown and developed as fields of study in the decades since the mid-20th century, many lead sheets and jazz composers/arrangers/musicians have adopted what are often called “slash chord” notation systems to further clarify and specify the voicings they intend to be played with their music. A slash chord indicates an “upper structure” (a complete chord by itself) played on top of a specified bass note using a slash symbol: “/” (more on slash chords below).

So how do we deal with the potential for confusion here? Here are my suggested guidelines for you to consider.

If a chord is notated with just a letter, such as “C” (unless told otherwise by the composer/arranger/bandleader):

If it is a common generic jazz chord symbol, added extensions are acceptable in most styles of jazz from about the 1930s onward.

It’s a bit complicated but the context will usually clarify the situation. C-7 for example almost always implies the Dorian mode, but sometimes a chord symbol will just say “C-“ in a jazz context where clearly it is meant to be a fuller voicing than a mere C minor triad. If you just see “C-“ followed by “F7” in the context of a 2-5-1 in a jazz tune, assume it’s C-7 (with an added 9th as an appropriate addition) with a corresponding C Dorian minor scale fitting best over the chord.

Again, the melody of the song might suggest one option more strongly over the other, but ultimately improvisers and comping instruments must agree on the fly by listening to each other and trying to agree on which option fits what’s happening musically.

For Half-diminished or Minor 7 (b5) chords:

The 9th should generally be avoided unless it’s specified as a natural 9 or b9. But 11ths will generally work while voicing these chords. Like the 13th on a dominant 7(b9), the 9th might be natural or flat depending on the scale choices of the improviser and the melody of the song.

By leaving the 9th out of the voicing, the improviser can choose to either play Locrian or Locrian natural 6 (the 2nd mode of harmonic minor) – both of which have a b9 – or Locrian natural 2 (the 6th mode of melodic minor) over half diminished chords.

Again, the melody of the song might suggest one option more strongly over the other, but ultimately improvisers and comping instruments must agree in the moment by listening to each other and trying to settle on an option that fits what’s happening musically.

Slash chords are probably the most modern and most specific types of chord symbols jazz musicians use. The interesting thing is that essentially all 7th chords and extended chords could ultimately be conceptualized and notated as slash chords. For example, “Cmaj.7” could be thought of as a E-/C (meaning literally an E minor triad played on top of a C bass note). Or “Cmin.9” could be thought of and played as Ebmaj.7/C.

In my experience, slash chords are usually interpreted as being more precise and inflexible. They are not open to interpretation as much as generic common jazz voicings. Slash chords essentially force chordal instruments to play a more specific voicing in many cases, and therefore they should be read more literally than other chord symbols, in my opinion.

So I recommend using slash chords often, especially when you have a very specific voicing in mind that captures the sound of the harmony you want to communicate to performers.

Here are some more examples:

Hopefully, you see the possibilities slash chords afford for precision and clarity from these examples. Generally, you can find a triad or some type of 7th chord and put it over bass note to very specifically and clearly arrive at a voicing that captures just about any type of sound you have in mind.

Notating these ideas using slash chords eliminates a lot of the guesswork out involved in trying to figure out what specific harmony the composer/arranger/bandleader has in mind.

Of course, if you don’t have something specific in mind and you want the harmony to be left more open to the interpretation of the performer, you always have the option of reverting to simpler, more vague, open-ended generic chord symbol notation as well.

I know this is a lot of information to digest, and of course my way isn’t the only way to interpret or conceptualize chord symbols, but the guidelines I’ve described above have been really helpful for me as I’ve tried to navigate lead sheets, solo transcriptions, arrangements, and original compositions from various styles and eras of jazz and popular music. I hope you find these guidelines helpful as well.

Facebook
Twitter
Previous articleHow to Start Crushing It On the Blues (Feat. Nick Mainella)
Next articleChords Analysis of Autumn Leaves