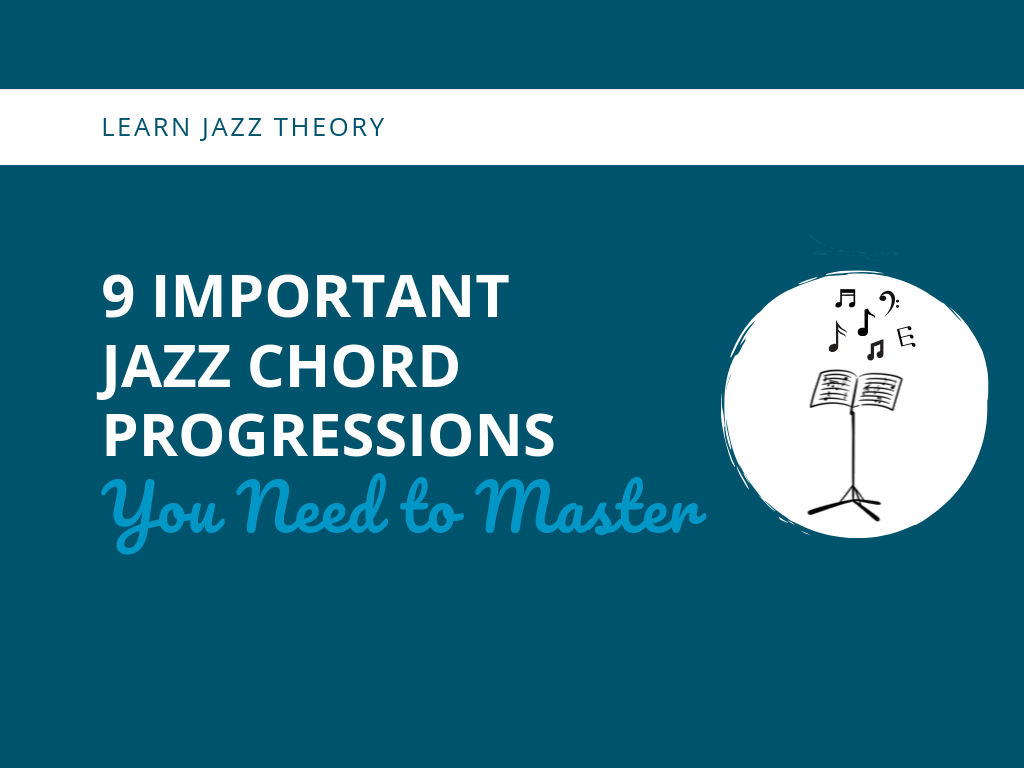 For some, learning jazz can be a daunting task. It’s harmonically complex, and because of this, there is a demand for a certain level of virtuosity.

I often find that those who love jazz but are too afraid to try to learn it become deterred by the sheer overwhelming nature of the task at hand.

However, when you are learning jazz or any style of music for that matter, you need to simplify things. It’s easy to listen to jazz or even look at a piece of sheet music and feel discouraged, so I find that it is helpful to break it down into smaller pieces.

Jazz can be made simple.

For the most part, it’s only a small handful of common jazz chord progressions rearranged and reused. Once you know a few jazz standards, you start to realize they all have similarities.

The key is you need to understand basic jazz chord progressions.

You need to know them inside and out. And once you know them, and learn how to improvise over them, any jazz standard you come across becomes exponentially simpler. Even the slightly unusual ones can be de-mystified.

If you want to break down jazz tunes and learn how to improvise over them, you need to master these 9 chord progressions.

Once you have a good handle on these, you will be surprised at how easy playing jazz starts to become.

If you need extra help with understanding jazz theory, how to construct chords, connect them together, and ultimately start improvising, check out my eBook and companion course Zero to Improv.

First we’ll start with “basic” jazz chord progressions, and then we’ll move to substitutions and other common progressions.

These are the fundamentals. Learn these first!

In this case, we are in the key of C major. Dmin7 is the ii chord; G7 is the V chord and Cmaj7 is the I chord.

I won’t be sharing licks for all of these jazz chord progressions, but this being such an important one, here is an idea to help you get started.

This jazz chord progression has the same function as the previous major ii-V-I, but of course is in a minor key.

In many jazz standards, you will find major and minor ii-V-I’s in the song form. If you’re not sure how to come up with chord qualities in minor keys, go here.

This jazz chord progression you see all of the time. You can find it most naturally in any rhythm changes tune, such as Oleo.

It’s important to note that the vi chord, to be diatonically correct, is a minor chord. However, jazz musicians will often turn it into a dominant 7 chord.

This is common practice, and so I have listed it as an option above. This is important to be aware of.

Now let’s bring this progression into the minor.

Remember that the vi chord in the minor diatonic series is being borrowed from the melodic minor harmonization of 7th chords. Therefore it is a half diminished chord.

The challenge of this progression is learning how to improvise over two half diminished chords in a row.

These are the basic jazz chord progressions you need to know. If you have these down you will be well on your way to dominating jazz standards.

I provide lick examples for all of these as well as strategies for starting to connect these chords together in my eBook and Companion Course Zero to Improv. Check that out if you want to go deeper.

I think it’s important that we go over a handful of important substitutions, alternatives
and add-ons to the basic jazz chord progressions.

The basic jazz chord progressions are foundational, but they are just scratching the surface.

While I won’t be going over every possibility, I’ll cover some key ones that you should be
in the know about.

5. iii replaces the I

In jazz, you will often see the iii chord replacing the I chord. For example, in the key of C,
a Cmaj7 is replaced by an Emin7.

6. #i diminished replaces the VI7

A classic substitution is the #i diminished for the dominant VI chord.

Most often this is seen in the context of a I-VI-ii-V progression. But when you sub the #i diminished for the VI it becomes: I-#idim-ii-V.

Why this works is a pretty hefty topic, and diminished theory is something I cover in Zero to Improv. But the basic concepts is that a dominant 7(b9) chord has all the same notes to it’s corresponding diminished 7 chord.

Jazz musicians are always looking for different ways to cycle chords. In traditional jazz
harmony, the harmonic movement is always trying to get back to the I chord.

Whenever the purpose of a jazz chord progression is to come back to the I chord it’s called
a turnaround. One such popular turnaround is the I-IV-iii-VI, which cycles into the ii-V-I.

Take a look at the IV chord.

To be diatonically accurate, the IV chord would be major 7, however, jazz musicians usually turn it into a dominant 7 chord. The major 7 can be used but is less common. The VI chord is usually a dominant 7 in this scenario.

Jazz musicians will often utilize what I call Chromatic ii-V’s. Sometimes they are included in a composition, but jazzers will sometimes add these into the harmony, or outline them in their improvisation.

Let’s use a ii-V-I example. This is a common use of chromatic ii-V’s but you can apply this to others when cycling in 4ths.

There are several different examples of tritone substitution that I cover in Zero to Improv, but the most common is the Tritone Sub of V.

Notice that a tritone sub of V in the context of a ii-V-I has the root notes moving chromatically (D-Db-C).

Right off the bat, you can conclude that by substituting a Db7 for a G7, it implies that the G7 has altered qualities.

Get all of these jazz chord progressions down, and you will have a huge advantage.

I highly suggest spending considerable time isolating these progressions outside of the context of a song so that you can learn to improvise over them.

Again, these are just progressions to be aware of. But if you want to start improvising over them with confidence, you’ll want to figure out the note choices you have to work and how to choose and place the right ones to make the changes come out in your solos.

Zero to Improv is my basic jazz theory eBook and Companion Course that helps with these concepts and applies it all to improvisation. Check it out if you think it may help!

Any other jazz chord progressions you think other musicians should be aware of? Leave them in the comments below.

2 Jazz Improv Concepts and an Etude Over “Solar”