3 Techniques to Improve Your Bebop Playing 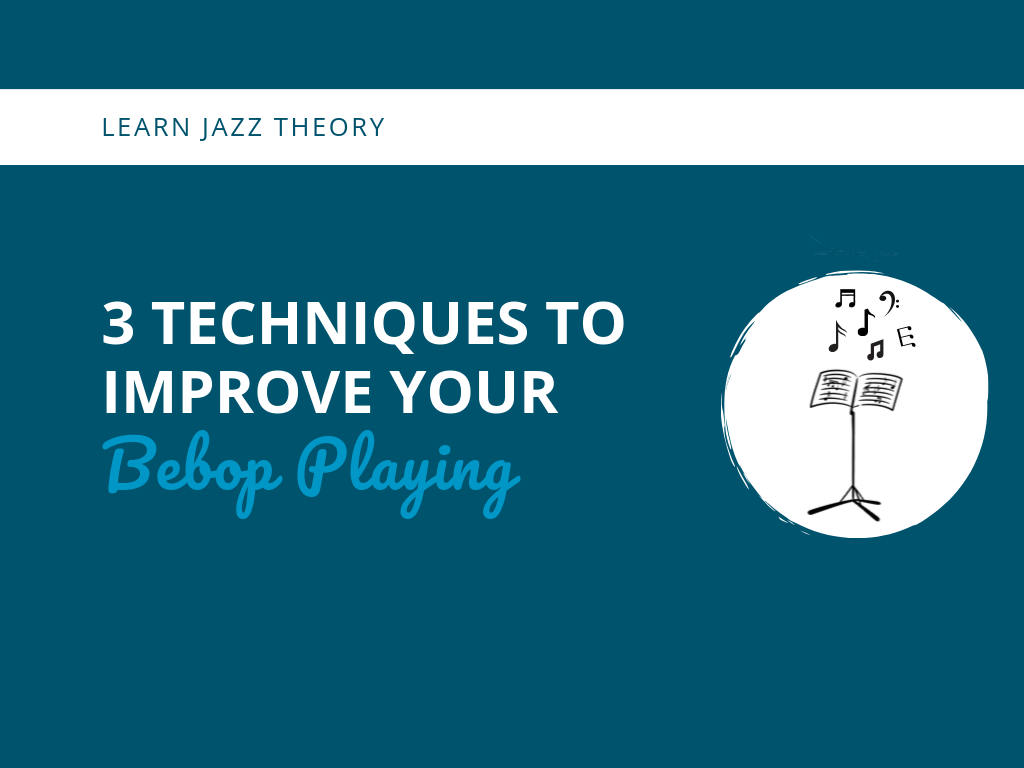 So much of jazz’s musical vocabulary today comes directly or indirectly from bebop. Even though it’s over half a century old, bebop continues to capture music lovers’ ears and imaginations as a unique sub-style of highly sophisticated jazz.

Though you could spend a lifetime studying bebop without exhausting all it has to offer, there are a couple of relatively simple concepts you can start applying to your playing which will help you access a bebop style of improvising more or less instantly.

So start practicing and applying these concepts to your playing and see what they do for you:

1. Syncopate and rhythmically displace your phrases.

The other pioneers of bebop were famous for creating rhythmic excitement and a sense of energetic forward propulsion with their improvised melodies. Charlie Parker’s playing, in particular, is fascinating from a rhythmic standpoint. One of the ways Parker achieves such compelling rhythmic phrases is by frequently using syncopation, especially in the sense of starting phrases on upbeats (or the “ands” of the beats).

The other key rhythmic device Parker uses is rhythmic displacement with repeated phrases, which means playing a rhythmic idea and then repeating it starting at a different part of the bar (this technique often results in the creation of asymmetrical “over the barline” phrases).

Let’s look at how this works using Parker’s composition Billie’s Bounce. It’s a famous blues head that many jazz musicians know and perform regularly. Take a listen and notice how every phrase starts on an upbeat – the “and” of a beat. It’s a highly syncopated melody.

Secondly, notice how the signature opening 4 bars (which have a notably “bouncy” rhythmic feeling that might have inspired the song’s name) don’t line up in a symmetrical way with a 4-bar phrase structure in 4/4 time. Normally, in a more “square” composition, you’d expect phrases to line up more or less symmetrically, meaning they’d start on downbeats and break down into clear 8-, 4-, and 2-bar units. Billie’s Bounce, on the other hand, features a prominent rhythmic motif which starts on the “and” of 4 in measure 1 and continues until roughly the downbeat of bar 4.

The excitement and interest of the melody result from our brains’ attempts to make sense of the conflicting information (a 4/4 time signature with an out-of-place 3/4 rhythm thrown in on top and repeated). The conflicting information results in musical suspense: we feel on some guttural level, even if we’re not aware of it, a sense of refreshing and stimulating uncertainty (“where is this phrase going…?”).

All of this happens at lightning speed within the space of a few measures. So Billie’s Bounce shows us the power of some of bebop’s classic rhythmic devices: combining syncopation, rhythmic displacement, and asymmetrical phrases.

Part of what makes bebop innovative in terms of melody is its increased use of chromaticism. Two of the ways jazz musicians make sense of the chromatic or “non-diatonic” (meaning “not derived from the notes of the tonic key’s scale”) notes in bebop is through the jazz theory concepts of surrounding tones and bebop scales. I’ve covered both of these topics before here on LJS, so check out my posts on how to incorporate bebop scales and surrounding tones into your playing.

Here’s a quick example of what I mean by surrounding tones:

Bebop musicians famously began exploiting and altering the extensions of chords in jazz harmony. A basic 7th chord includes the root, 3rd, 5th, and 7th, but even the most basic modern jazz voicings often include 9ths, 11ths, and/or 13ths in most chords.

Early jazz musicians and pre-swing era players such as “Jelly Roll” Morton and Bix Beiderbecke were already exploring more colorful harmonies with extended chords, but more complex jazz harmony really took off by the time composers such as Duke Ellington came along in the big band era. As jazz’s harmonic vocabulary continued to expand and develop in the late swing era (roughly in the late 1930s), jazz musicians who spearheaded the movement we now call bebop began exploiting and altering the more “colorful” extensions of chords, especially 9ths and 13ths. So try to build lines that voice-lead around the extensions of the chords to add some bebop “flavor” to your improvisations.

A great way to practice lines that voice-lead in a specific way is to think about building melodies based on guide-tones (I’ve written about guide-tones before here on LJS, so check out that post for a quick review). Here is an example of a guide-tone line over a major 2-5-1 that exploits the upper extensions of the chords that you can begin to explore as a starting point or framework for creating melodic lines (the basic guide-tones are notated first, followed by an example of a melody built based on the guide-tones).

If you combine these three musical devices successfully, you’ll be well on your way to improvising convincingly in a bebop style. Have at it, and happy practicing!

Facebook
Twitter
Previous article
7 Chords You Can Play the Melodic Minor Scale Over
Next article
Inside the Development of a Jazz Musician (feat. Chris Davis)