How to Use Guide-Tones to Navigate Chord Changes 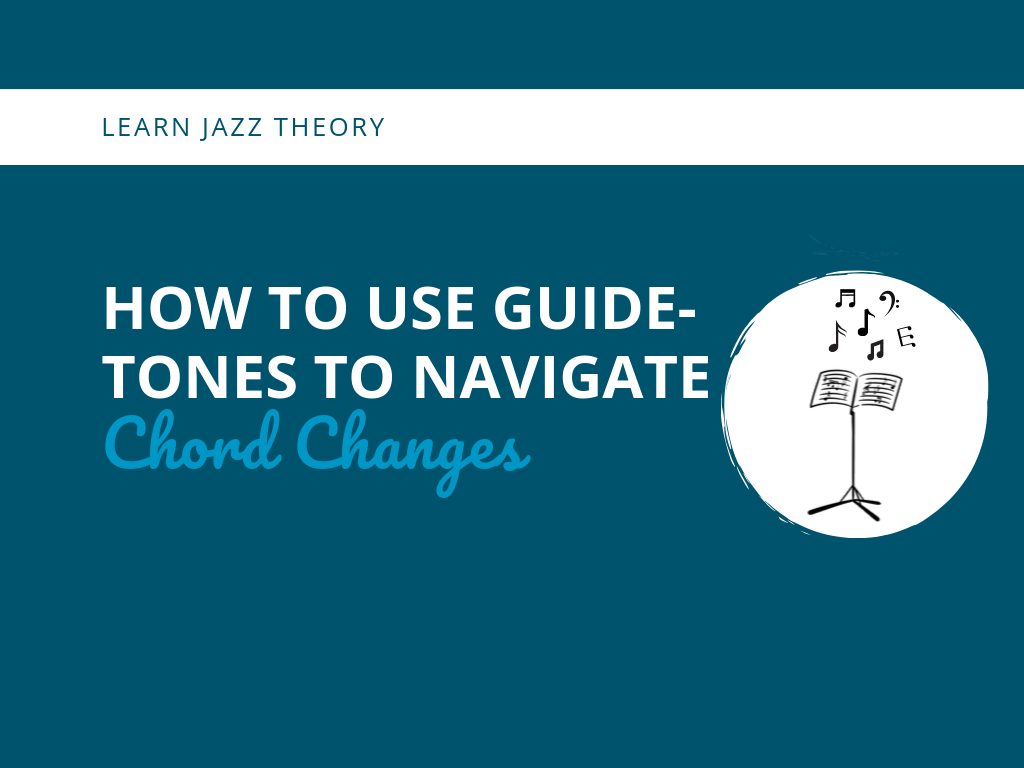 One of the most useful concepts which has emerged in jazz theory is the notion of guide-tones. Guide-tones are melodic lines constructed from one or two pitches strategically extracted from each chord of a tune’s changes. The idea is that if you distil a chord down to its essence, or its “shell,” you can begin to create a melody that outlines the harmonic progression of a tune with minimal effort.

Then, after developing a basic guide-tone melody, you can begin to elaborate on it, embellish it, and decorate it, which allows you to generate new and creative musical vocabulary while simultaneously clearly referencing the chord changes.

The guide-tones most frequently and effectively used are the 3rds and 7ths of the chords in a harmonic progression. 3rds and 7ths work very well as guide-tones because they are the pitches that define the difference between the three most common types of chords in jazz harmony: major 7th, minor 7th, and dominant 7th chords.

To illustrate this, think about Cmaj7, Cmin7, and C7. The roots and 5ths of all three of these chords are the same two pitches: C and G (which are typically the notes the bass player is most likely to emphasize while walking bass lines). What differentiates Cmaj7, Cmin7, and C7 from each other are the particular combination of 3rds and 7ths (natural 3rd + natural 7th = maj7, natural 3rd + lowered 7th = dominant 7, and lowered 3rd + lowered 7th = minor 7th) . So, since the bassist is already generally outlining roots and 5ths, you can focus on emphasizing the 3rds and 7ths of the chords as the key notes which define the harmonic progression.

Here is an example of how to visualize guide-tones based on the shells (3rds and 7ths) of a chord progression using the jazz standard “All The Things You Are” (in the key of F-major concert): 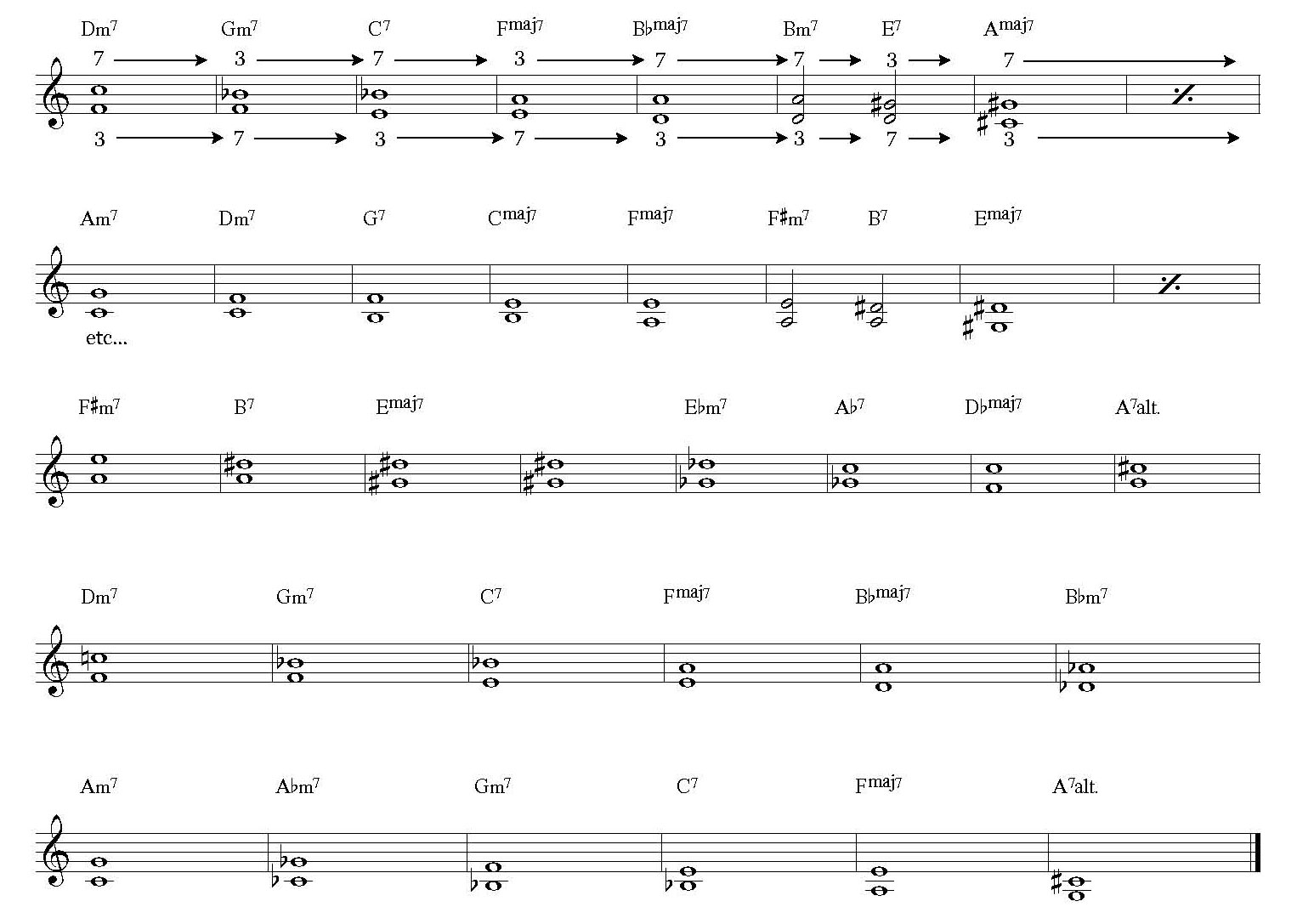 Notice how the 3rds and 7ths of the chords voice-lead well into each other – there are a lot of common tones and stepwise intervals between the various sets of 3rds and 7ths as the chord changes progress (usually with the 7th of one chord resolving neatly into the 3rd of the next chord). You can take the shells of the chords as notated above and turn them into an equally clear and melodic guide-tone melody, like this: 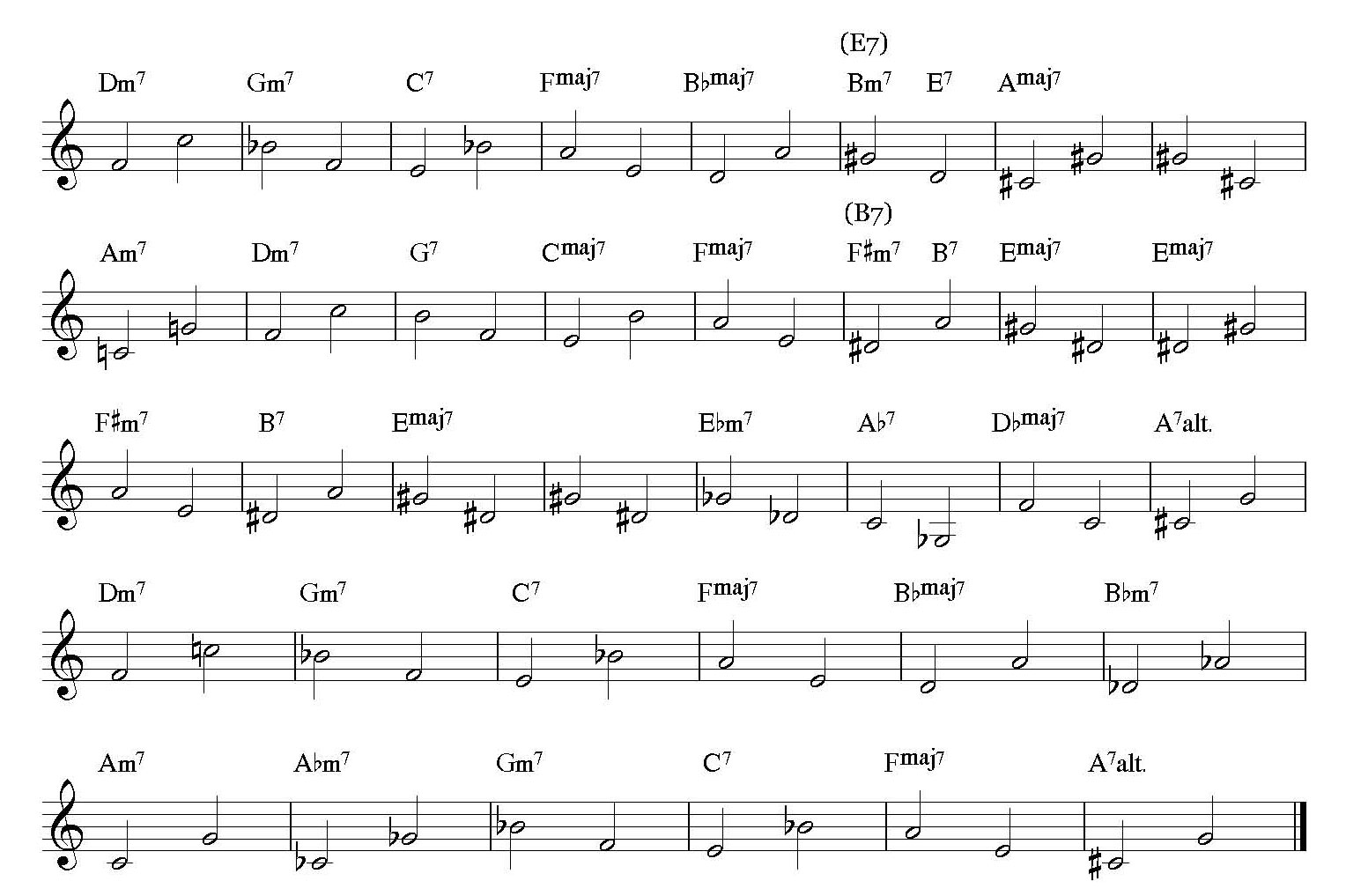 The use of added chromatic tones is an entrenched part of the jazz tradition and an effective strategy especially prevalent in bebop. The idea is to pick a “target” or “goal” note and “approach” the target pitch by constructing a melody consisting of added notes above and/or below it. 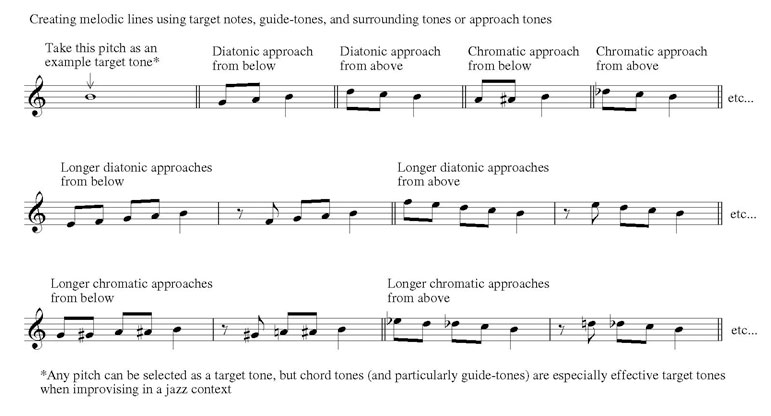 Combine the guide-tone concept with diatonic and/or chromatic surrounding tones, and you have a ready-made system to spontaneously generate melodic vocabulary over a tune without having to rely on “lick playing,” which I’ve discussed before here on LJS.

Here’s an 8-bar example of an exercise which combines guide-tones with surrounding/approach tones, again using the first part of “All The Things You Are” (in the key of F-major concert) – notice how the melody lands on a chord tone (a 3rd or 7th) on beats 1 and 3 of every measure:

To recap, here’s what you can do to practice and apply guide-tones and expand your jazz vocabulary:

If you want to get more information on guide tones and dig in a little further to the basic approach, check out this related video that Brent put together.

Best of luck with your practicing and always remember to take action!

Facebook
Twitter
Previous article
LJS 47: 3 Ways to Develop an Original Sound On Your Instrument
Next article
5 Hard Bop Albums You Need to Listen To