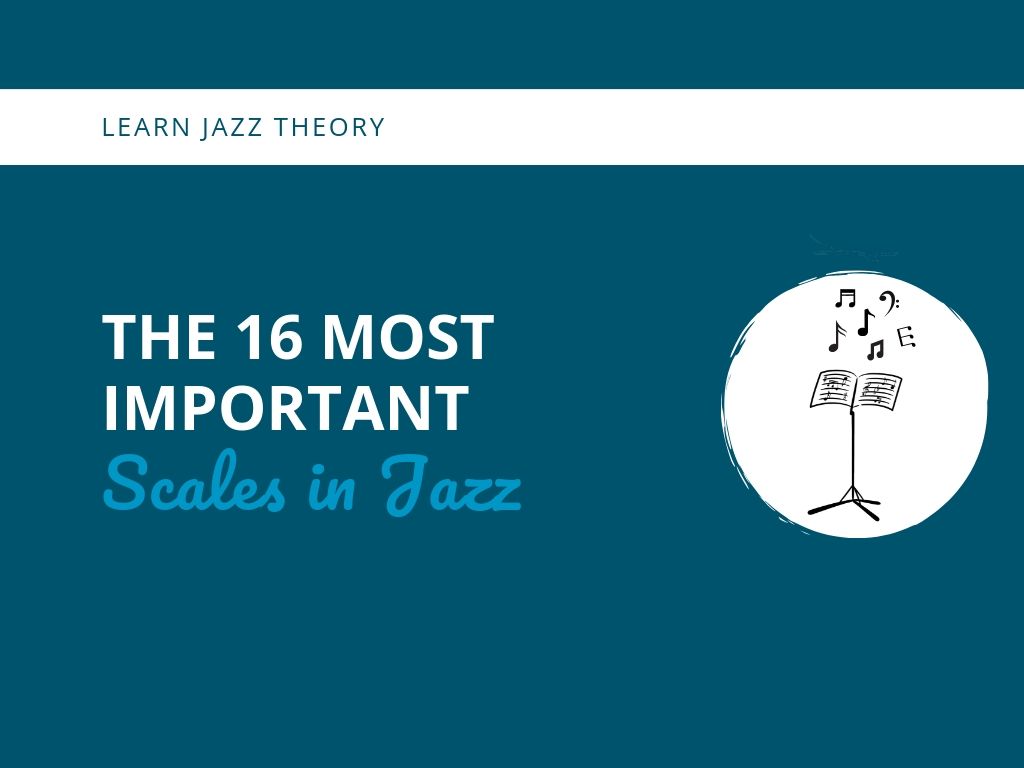 Here is a list of the 16 most important scales for jazz improvisation and the harmonic contexts in which they can be used for improvisation.

It doesn’t matter whether you play guitar, piano, saxophone, trumpet, bass, or the kazoo. These scales are important for all instruments to know.

While we do not want to sound like we are playing scales when we improvise, it is nevertheless very important to know what notes will be consonant with each chord, which is why chord/scale theory is so important.

You still have to study the language and vocabulary of jazz in order to know how to appropriately apply these scales in your improvisation!

I like to think of scales as “pitch collections.”

Meaning, note choice options we can play in any particular order, rather than a linear pattern to play.

I think this is a healthier way to think about scales, and ultimately will help us become better jazz improvisers.

So with that being said, let’s dive in to the 16 most important scales for jazz improvisation and make sure we know them.

The Modes of the Major Scale

When it comes to diatonic harmony, understanding the modes is incredibly important for relating “pitch collections” to different chord qualities.

The Dorian minor scale as a b3, natural 6, and b7.  It is the most commonly used minor scale for improvisation in jazz music.

It works over any ii chord, or i chord, but it can also be used for other minor chords, such as the iii chord and the vi chord.

Of the five types of minor scales (Dorian, Phrygian, Aeolian/Natural Minor, Harmonic Minor, and Melodic Minor), the Phrygian mode is arguably one of the two least common minor scales for jazz improvisation, along with the harmonic minor.

The Phrygian mode is still used in at least two contexts:

The most obvious example is as IV chord (e.g. F major in the key of C), but the Lydian mode can also work well over a I chord.

The Lydian scale is the brightest of all the church modes, and has a distinct, modern flavor over a I chord due to the non-diatonic (in the context of a I chord) #4 chord tone.

The Mixolydian mode is the most basic scale for improvising over a V7 chord.

You can also use the altered scale, the half-whole diminished scale, whole-tone, or even Phrygian over a V7 chord, but each different scale implies different alterations, and different scales will work better in different musical contexts.

You’d think that natural minor should be the preferred choice for minor chords, but most players default to using Dorian over a minor chord.

You can choose to use Dorian over a vi chord, although Natural Minor is usually an acceptable choice also for a vi chord or a minor i chord.

7. Locrian or Half Diminished

The exotic Locrian scale is the darkest, most dissonant mode of the major scale.  It works well over a half-diminished chord (also known as a min7(b5) chord).

When approaching a half-diminished chord, some players like to sharpen the b2 from the Locrian mode to a natural 2.

It’s useful to place Locrian and Locrian #2 into the same category of scale, as they can both be used to navigate a half-category:

If you’d like a more full explanation on the major modes, check out this video I’ve created:

All diminished scales are made up of alternating half-steps and whole-steps, but you can start with either a half-step or a whole-step.

The half-whole diminished scale can be referred to as dominant diminished because it works well over a dominant 13(b9) chord.

The altered scale is actually the 7th mode of melodic minor.

Vibraphonist Gary Burton likes to remind us that the altered scale has a hidden tone, the natural 5th, that is also consonant with this scale.

The whole-tone scale only has 6 notes (the 7th note would be the doubled root in the top octave). It is entirely made up of whole-steps: W-W-W-W-W-W.

The blues scale is one of the first scales that many jazz musicians are taught.

I prefer to think of the blues scale as a Minor Pentatonic with an added #4.

These scales are often played over a blues, as the sounds lend well to that sort of language.

However, if you want to go beyond these scales, definitely sign up for our free masterclass “Boost Your Jazz Blues.”

Lydian implies a #4.  Dominant implies a b7.  If you put them together, you have the fourth mode of the melodic minor scale!

If you add an extra chromatic passing tone to a major, Dorian, or Mixolydian scale, you get a bebop scale.

While bebop musicians technically put the chromatic notes in other places and it sounded just fine in recordings, jazz theorists have codified the bebop scales into something more concrete, placing the chromatic passing tone between 6 and 5 (major bebop scales) and 8 and b7 (dominant and minor bebop scales).

The bebop scales are primarily descending scales, and so I’ve listed the numbers backward to reflect the descending nature of these scales.

You can use the major bebop scale with any major chord.

The minor bebop scale has a chromatic between 8 and b7.  It works well over a minor chord.

Remember to use the chromaticism in the scale when improvising, and to use the natural 7th as a passing tone.

The Mixolydian bebop scale is the quintessential bebop scale.  It has a chromatic passing tone between 8 and b7, and it works the best over an unaltered dominant chord.

I hope that these scales will help you in your quest to become a better improviser!

You definitely want to go further than just learning these in the key of concert C and take these through all 12 keys.