How to Substitute a Dominant 7 for a Diminished 7 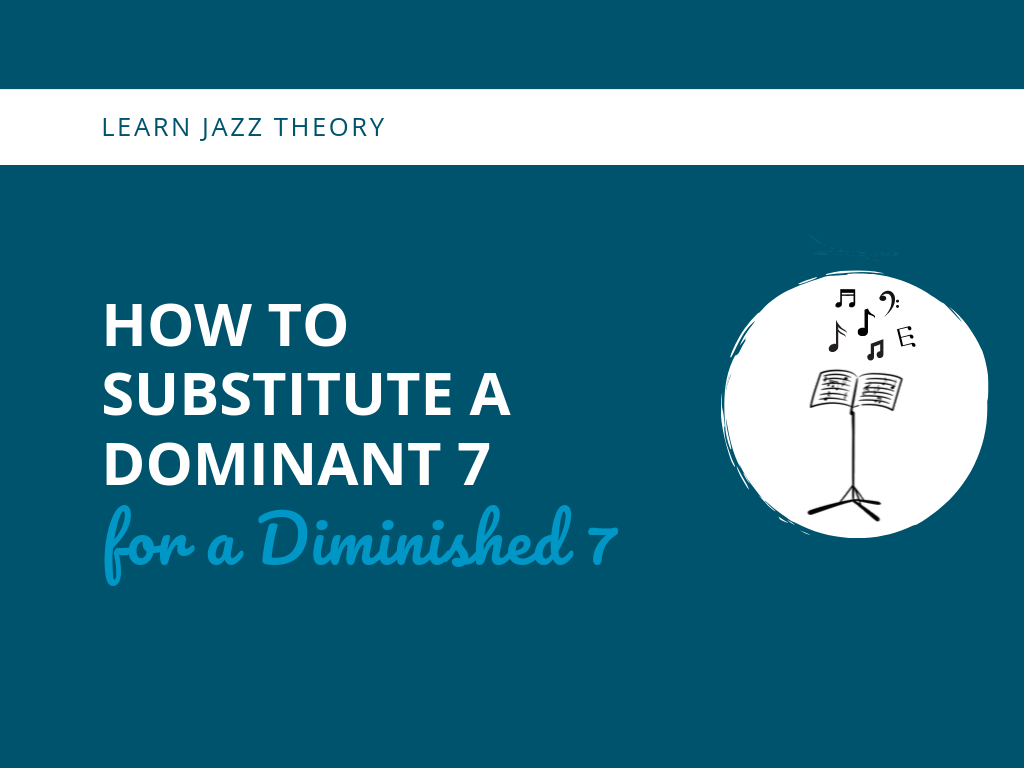 As a jazz musician, I love learning new jazz theory tricks to apply to my playing. While learning jazz language by ear should be the primary way we learn to play, conceptualizing different ideas through music theory can be a really helpful tool.

So here’s a simple but quite useful theory tip for you to use today: how to substitute a dominant 7 for a diminished 7. Using diminished ideas over dominant chords can be a refreshing approach when used in the proper context. Here’s the rule:

The Dominant 7 and Diminished 7 Rule

Essentially, if you see a dominant 7 chord resolving to another chord, it can be altered. For example, a ii-V-I chord progression.

This is the same case in a I-VI-ii-V.

To be diatonically authentic, the vi chord would be minor (Amin7), but in jazz we often turn this chord into a dominant 7 chord (A7), to add some color in the voice leading. Therefore, the A7 now resolves to the ii (Dmin7) and the V (G7) is presumably resolving to the I chord. Both the VI7 chord and the V chord can be altered. Because they can be altered, we can apply a diminished sound to them.

For easy demonstration purposes, let’s look at a C diminished scale. This scale is also called a Whole Half Diminished Scale because it is built off of these alternating intervals.

But if you know anything about diminished 7 chords it’s that they are symmetrical. Here’s the rule:

Because of the symmetrical intervals, there are only 3 possible diminished chords. All 12 keys are related to one of those 3 chords. A diminished 7 chord can be moved up or down in minor 3rds and be thought of as an inversion of the original or a new key entirely.

So if you think of this rule in the context of altered dominant 7 chords, if you had a D7(b9) chord, you could play and Eb diminished scale, C, Gb, or A. Because of diminished symmetry, they are all the same.

Now, because the diminished scale moves symmetrically in its intervals using alternating whole steps and half steps, you can also start the scale on a half step. That’s where the Half Whole Diminished Scale comes in. This scale is specifically used to play over altered dominant chords starting on their root.

Let’s do one last example and move away from scales and focus more on the chords. Let’s say we are applying the diminished half step up rule over a Bb7(b9) chord. So we will be playing a Bdim7 sound over this chord.

Let’s start by asking the question: what notes are in Bb7(b9) and Bdim7 chord?

So what notes do these two chords share? B-F-D-Ab.

In fact, the only note they don’t have in common is the Bb. But you don’t need the root of the chord, especially since this is a tension chord that needs to be resolved.

There is a lot of interesting diminished theory out there, but this is just a simple one to take home and practice. Spend some time playing around with this idea using both kinds of diminished scales, and applying the Diminished 7 Chord Rule.

Facebook
Twitter
Previous articleWhy You Should Learn The Lyrics to Jazz Standards
Next articleLJS 45: Should I Go to College For Jazz?