Secrets of the Diminished Scale 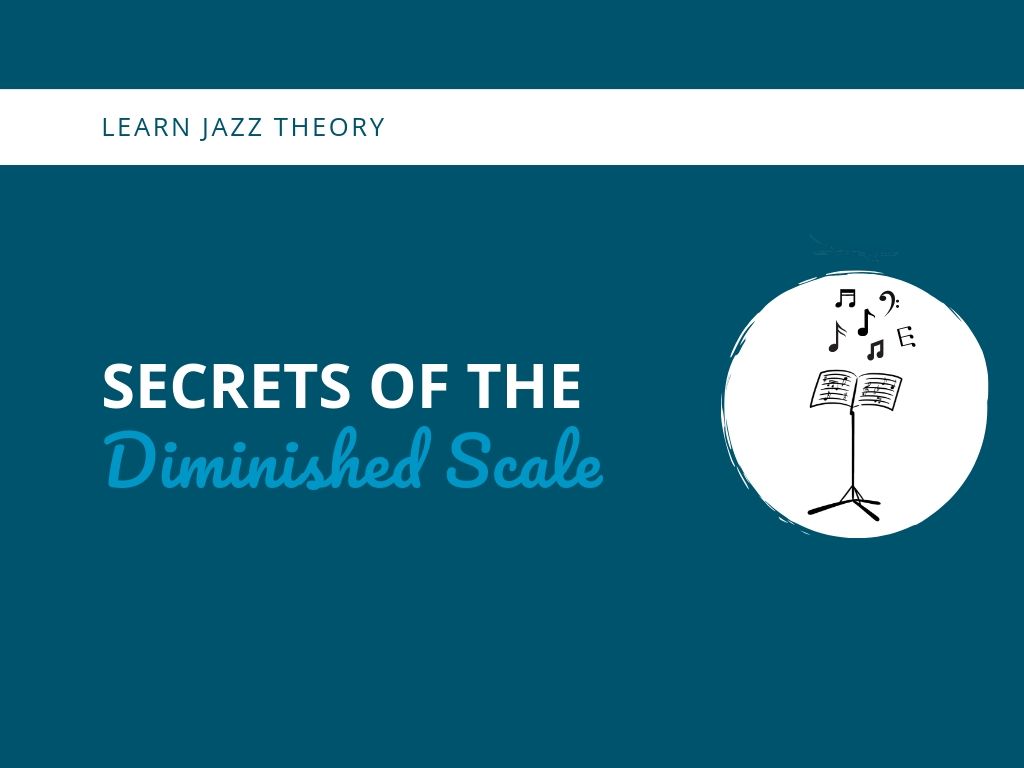 There are 12 major scales. It would seem to follow there are 12 of any other type of scale,  one for each chromatic note. However, this is not the case.  Because of their symmetry, there are only 3 diminished scales and only 2 whole tone scales! Of course, there is only one chromatic scale. In this article, we will unlock some of the secrets of the mysterious diminished scale.

There is a movement in modern jazz theory to talk about scales in terms of “pitch collections,” which is just what it sounds like; a collection of pitches.  The term is sometimes used in lieu of the word “scale” to help de-emphasize the sequential nature of a scale.  Seeing the notes in a pitch collection outside of their relationship to a sequential “scale” can theoretically be a positive thing for an developing improviser seeking to play coherent melodies instead of just “using this-or-that scale to improvise.”

Diminished scales consist of alternating whole steps and half steps. Some people call diminished scales “Octatonic” scales, as they have 8 notes (counting the root only once). This is different from the major modes, which have only 7 notes, again counting the root only once. However, the term “Octatonic” can also be used more generally to mean an eight note scale, though it is commonly used in reference to a “diminished scale” instead of the more generic reference.

There are actually two different forms of the diminished scales, like two sides of a coin. The two forms both have alternating whole steps and half steps, but they differ in that they start with different intervals. In the two different forms below, the W stands for “whole-step” and the H stands for “half-step.” Consider the two forms of the diminished scale, noting the starting intervals:

This is most commonly referred to as the whole-half diminished scale. This scale is especially useful for dealing with diminished chords.

People sometimes use several other names for the “half-whole” and “whole-half diminished” scales, but the other terms aren’t standardized, and are sometimes even contradictory. The most clear ways to talk about these scales is in terms of  the “whole-half” and the “half-whole” diminished scales because it tells you exactly which scale you are talking about in the name. I highly recommend using these two terms because there is no consensus on what the alternate terms mean.

Confusingly, I have heard BOTH the “whole-half” and the “half-whole” diminished scales referred to as the “auxiliary diminished scale” by different sources, but since different people mean opposite things regarding the term, I would recommend steering clear of it.  It’s ambiguous. 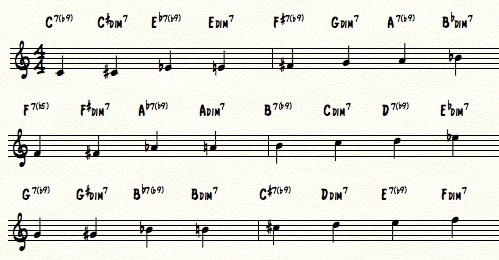 Another way of stating this concept is that each chord symbol represents the starting note of a different eight-note diminished scale from one of the three diminished pitch collections. Again, to help us think about these three pitch collections, I started them on C, F, and G. That’s just an easy way to remember it, but I could have chosen any of the 8 tones in each of the 3 pitch collection as the starting pitch.  Starting on C, F, and G is simply a reference point.  We could just have easily started on C, Db, and D instead.

Hopefully this helps shed some light on the mysterious diminished scale!  Because of the symmetry of the scale, you can use each of the 3 diminished scales with eight different chords.  Here is an example of a diminished lick used over a 7(b9) chord, for further study.