Stuck On One Chord: Strategies to Improve Your Modal Jazz Solos 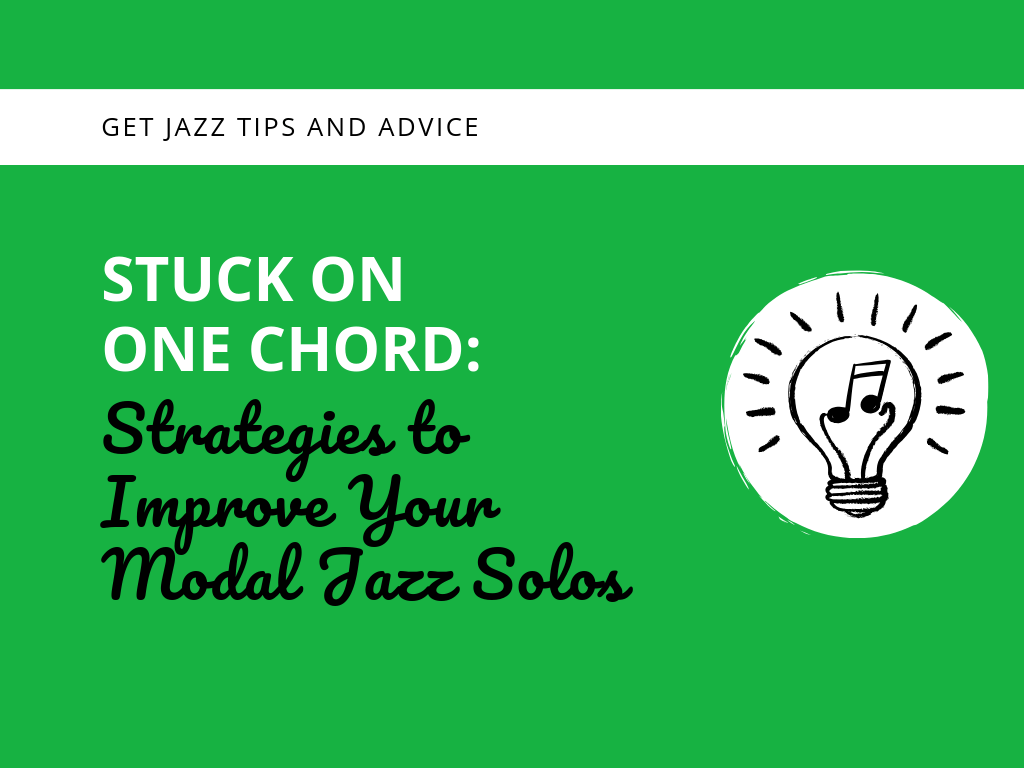 Very often iconic modal jazz tunes, such as Miles Davis’s “So What,” are among the first songs young, inexperienced, and newly aspiring musicians learn how to improvise on. Although modal tunes (which are songs that have relatively static harmonic progressions with only a few chords that alternate slowly/infrequently) are frequently used as jazz teaching and learning aids because they’re ostensibly easy to play over, improvising in a modal context can be quite difficult in the grand scheme of things.

It’s ironic because, when you’re trying to play jazz for the very first time, modal tunes are a good starting place because they’re relatively “easy” to solo over. All you need to know is the small handful of scales and modes most basic modal songs employ. It’s convenient to get started with modal tunes when you’re trying to improvise for the first time. All you have to think about is one, two, or a few chords at once, and you have ample time to relax as you try to put together some basic melodies and rhythms to get your creative juices flowing. You’re not distracted by excessive information and not stressed out about “making the changes” or tracking the harmony as a ton of complex chords rapidly fly by, which can be intimidating for new jazzers.

But as you grow and develop as an improviser, eventually the paradigm flips for many people, and modal playing becomes difficult for precisely the same reason it was so easy initially: there is so little harmonic information to latch on to or be inspired by. It’s a sort of paradox – harmony that’s too “easy” or simple might become more “difficult” to work with over time for some more advanced players.

It’s a common experience: as you gain experience as an improviser and learn how to navigate complex jazz harmony with relative ease, tunes with a lot of chord changes become easier to solo over. The constantly changing chords give you a ready-made wellspring of notes to draw from as you build your melodic ideas, and the constantly shifting harmonic underpinning provides a convenient structure that adds fluidity and pleasing variety to your solos melodically and harmonically. You don’t have to worry too much about what notes to play and when to play them – it’s all suggested to you by the voice-leading within the chord changes.

Modal tunes on the other hand “give you” relatively little to work with. They’re so minimalistic that it begs the question – what do I play? It’s all too easy to fall into the trap of only running up and down scale and chord patterns based on the mode you’re playing over. This strategy is useful to a certain extent, especially for beginning improvisers trying to synthesize melodies for the first time, but it quickly falls flat and leaves performers and audiences feeling boxed in and directionless. Modal jazz can become all-too predictable and unpleasantly inert. Which, again, is ironic, because modal jazz originally developed precisely because some improvisers wanted more melodic “freedom” and creativity while improvising.

But it doesn’t have to be that way.

Miles Davis’s great modal music is a testament to the immense potential expressive power inherent in modal jazz. Instead of letting modal jazz’s open-endedness become a paradoxical roadblock to creativity, let’s look at Miles’s original reasons for shifting to modal playing as a way to inspire ourselves to come up with new approaches to modal improvisation.

Most if not all of us know the conventional story of how modal jazz developed:

It’s said that Miles grew tired of improvising over tunes with a lot of rapidly changing chords, and he began to feel boxed in or “restricted” by complex chord progressions that demanded immense amounts of attention (think: bebop).

Miles realized that when you’re playing a tune with complex chord changes, you might get caught up in thinking primarily about the quickly moving harmony. If your attention is completely tied up in the task of tracking the chord changes, you may feel like you have less emotional and/or creative energy available to dedicate to the act of crafting a truly powerful, expressive improvised solo.

In a sense, too many chord changes might end up “dictating” your note choices to a large extent, thus potentially limiting your melodic creativity. So, with this in mind, Miles decided to slow down and simplify the harmony for most of the songs on his classic 1959 album Kind of Blue. And modal jazz was born (so the story goes).

So rather than falling back on simply running scales/chords/melodic patterns, let’s try to recapture the newness and freshness of Miles’s modal music.

Let’s ask: what are some strategies you can deploy to expand your musical palette when improvising in a modal context?

Here are a few ideas to get you started:

This is the “big” one. Too often jazzers just dive into an improvisation and start playing all their “stuff” (e.g. licks, which I’ve written about before here on LJS) without thinking about the big picture of their solo. Perspective and awareness are key here. Be mindful of the entire context of your solo while you’re improvising. What do you want to say with your solo? How do you want the audience to feel when you’re finished playing?

Modal jazz tunes remove the pressure of “playing the changes” – which should free up some mental space for you to think about the overall narrative aspects of improvising a solo. You could try to tell a story with your solo, for instance. One strategy for constructing a narrative-based solo is to use motivic/thematic development.

Start by coming up with a short rhythmic and/or melodic theme (or fragment, motive/motif, cell – whatever you want to call it), and then develop Play it faster, slower, sequence it, elongate and truncate it. Play it in different registers. Add to and subtract notes from it. Play it forward and backward – reverse the intervals and/or melodic direction. Follow your ideas and creative impulses wherever they lead you. It’s like introducing and subsequently developing a character while writing a novel or screenplay. Introduce some musical tension – play around with consonance vs. dissonance – colorful vs. milder pitches. Try to create some conflict, some drama.

There’s a lot to explore and consider. When will the climax of your solo be? How will you achieve that climax? Experiment and find out what works best, feels good, and sounds effective for you!

Instead of slipping into default jazz-student mode where you just run up and down scales and symmetrical modal melodic patterns, try to come up with melodic patterns that aren’t so symmetrical, repetitive, and predictable. For example, leap up a 7th, then down a 3rd, then up 2nd, then down a 5th, then maybe leap a few octaves away in either direction, etc. Prioritizing asymmetry can lead to the discovery of new and interesting melodic ideas and can help to break up the monotony of a solo by introducing elements of surprise and unpredictability. Combine symmetrical and asymmetrical ideas as yet another strategy to maintain your and the audience’s interest.

Prioritizing asymmetry can lead to the discovery of new and interesting melodic ideas and can help to break up the monotony of a solo by introducing elements of surprise and unpredictability. Combine symmetrical and asymmetrical ideas as yet another strategy to maintain your and the audience’s interest.

3. Focus on creating musical tension and release using rhythm, dynamics, timbre, register/range and other forces instead of just melody.

To expand on the idea of thinking about overall form/structure, try creating a narrative structure by manipulating musical elements other than just melody. See if you can pick just one or a few notes and create a compelling melody by playing interesting rhythms. Play around with the rhythmic feel – try using space (rests/silences), try tapping into triple vs. duple time feels, try superimposing other meters, try exploring polyrhythms, etc. Likewise, you can use dynamics (louds and softs), timbre (tone quality), register/range (highness and lowness of pitch) to create musical contrast, drama, excitement, and variety.

4. Start with only a few notes, then slowly “expose” the rest of the mode.

One interesting strategy is counterintuitive but useful – at least as a practice tool if not always as a full-blown performance tactic: limit your note choices even further.

When you have limited choices, it forces you to get creative, and it forces you to start thinking about other elements of music, as mentioned in #3 above. You can start by constructing melodies while relying only on a few pitches from the mode you’re dealing with, then slowly add other pitches into the collection you’re drawing from until you’re exploring the full mode.

You can then take this strategy a step further and begin introducing non-diatonic or “chromatic” notes not from the mode you’re playing over. Why not try taking it the whole nine yards and eventually tapping into the whole chromatic scale! Then you can return to the original mode and/or restricted pitch set (or not!).

This might be over-used, and if you’re not careful you can over-do it, but it’s an important and useful strategy nonetheless. Try weaving in and out of the mode you’re playing over by playing up a half step or by playing a tritone away. Try exploring diminished, whole tone, augmented, and other non-diatonic modal scales. Try superimposing II-V’s and other chord progressions – the cycle of 5ths and the “Giant Steps” cycle from John Coltrane’s iconic song are two common examples of progressions that are often superimposed upon static harmonies.

There’s no limit to what you can superimpose – the trick is to organically and seamlessly weave your superimpositions into your solo without making them feel “forced,” “artificial,” or overly intellectual (or overdone).

These aren’t the only strategies of course, but hopefully, these ideas will help you get your creativity flowing, and I hope you’re inspired and feel better equipped to refresh and revitalize your modal improvising!