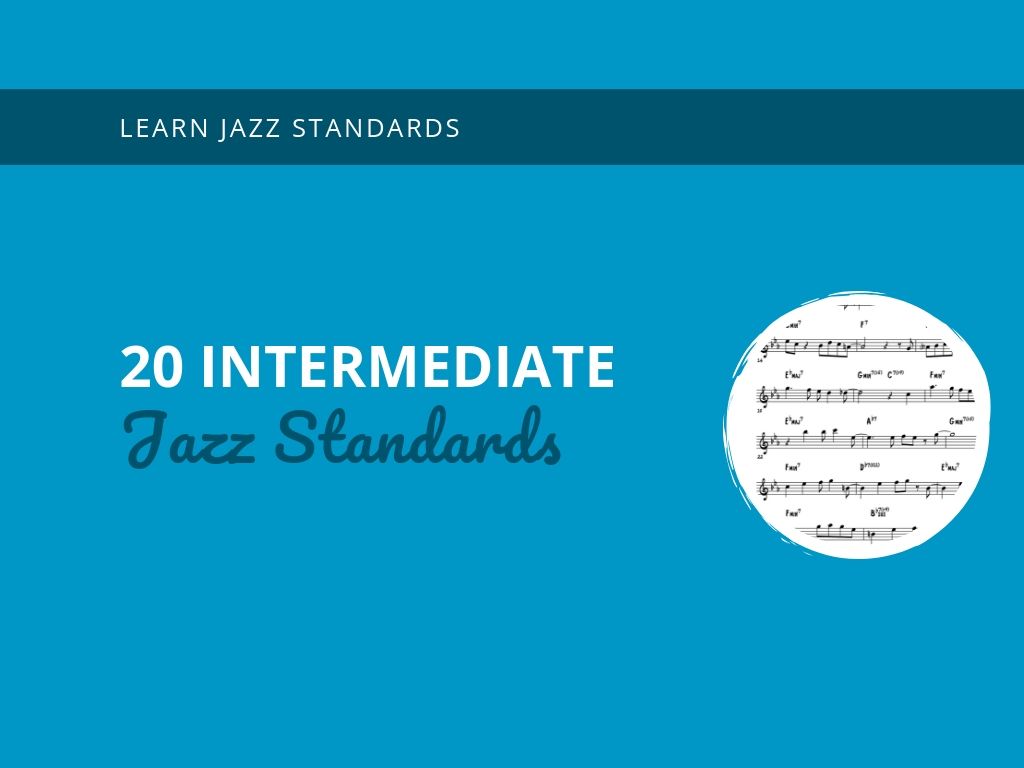 We all start as beginners, but at some point jazz musicians are ready to play more difficult repertoire. We recently listed 20 Jazz Standards for Beginners.  Here are some intermediate level standards for people ready to take things up a level!

The criteria for intermediate tunes, when compared to a beginning tune, include:

This was the easiest list to populate of the Beginners, Intermediate, and Advanced Jazz Standards series. The majority of jazz standards can probably be classified as “intermediate level.”

A Night in Tunisia A classic tune by Dizzy Gillespie.  This is an AABA form with an Interlude.  The interlude is often played after the head only, although it can be arranged in other ways.

Anthropology This is a Charlie Parker head over Bb rhythm changes.

Days of Wine and Roses A Henry Mancini favorite.

East of the Sun (West of the Moon)  A favorite standard that was actually written by a student at Princeton University.

Groovin’ High A classic bebop tune by Dizzy Gillespie.  This tune has the unusually harmonic progression of an Ebmaj7 chord followed by Amin7 D7, a ii-V7 in G Major, resolving back to Ebmaj7 instead of G major.

How High the Moon  This classic standard is the basis for Charlie Parker’s Ornithology.

It Could Happen to You A classic Great American Songbook standard.

Lester Leaps In  Bb Rhythm Changes with an easy melody.

My Funny Valentine This is one of the top jazz ballads of all time.  The tune moves between A minor and several major keys, finally ending in C Major.

Oleo  Quite possibly the most commonly played tune over Bb Rhythm Changes.

On Green Dolphin Street in C or Eb  A very common standard which often moves back and forth between latin and swing.

Scrapple from the Apple  Charlie Parker’s contrafact over the changes to “Honeysuckle Rose,” but with a different bridge.