Have you ever wanted to increase the rhythmic interest of your improvisations? Try using hemiola and over-the-bar-line rhythmic patterns to try some new ideas. I have been teaching at the Great Basin Jazz Camp all week, and I consulted with several other faculty members on this article. Tom Goicoechea is an excellent young drummer on our faculty. He was a great help in writing this article. I also consulted with Devon Yesburger, a talented young pianist who attends Berklee College of Music. He is the youngest member of our faculty, and he has a very bright future. Finally, I consulted with Andrew Meronek, a trombonist, and arranger for the NATO band in Belgium. What follows are some of the things we came up with.  There will be more ideas at a later time.

3 Against 4 Pattern Over a Blues 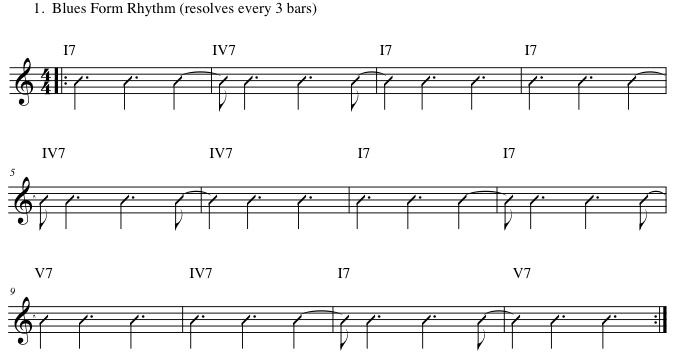 The pattern repeats itself 4 times (every 3 bars).  Since it resolves every three bars (comes to a downbeat so it can repeat itself starting on beat 1) it cannot be used over a 16 bar or 32 bar form evenly over the whole tune without modifying it in some way.  You don’t have to use it for the whole song form on a blues or any other tune, but you can put it in anywhere you want.  The whole idea is to stay musical, but to create some interesting melodies using these rhythms.  You can repeat the 3 bar pattern once, twice, thrice, etc…be creative (and musical).

This is a fun pattern to use.  It resolves every 3 bars, like the first pattern.  Here is an example of how you may use this pattern over a chord progression.  I use a ii-V7-I chord progression in the key of C.

Using this rhythmic pattern, we are using a melodic sequence using the C Major scale.  I like this example because it uses both rhythmic displacement (starting the same pattern on different beats) and a melodic sequence.  You may want to try practicing this idea in scales before trying to use melodic patterns over chord progressions.

6 Against 8, with an 5 eighth notes and one rest

This is a very similar pattern, and also resolves every 3 bars.  It is still 6 Against 8 because it repeats itself after every 6 eighth notes, while there are an underlying 8 eighth notes in each measure.

Here is a melodic idea that uses this pattern:

The LJS Inner Circle is now open! Want  to take you jazz playing to the next level with a monthly jazz standard study, LJS courses, and a practicing community?

​LEARN ABOUT THE LJS INNER CIRCLE