Welcome to episode 121 of the LJS Podcast where today we are digging into some jazz theory and talking about secondary and backdoor dominant 7 chords. These are two concepts that are used to resolve to a tonic I chord. If you understand these concepts they can help give context to a chord progression you are improvising over. Listen in!

In today’s episode, I’m digging into some jazz theory and talking about V7-I chord resolutions. But specifically, I’m discussing some alternatives to the common V7-I resolution. I’m talking about Secondary Dominants and the Backdoor Dominant.

A backdoor dominant is a dominant 7th chord that substitutes the V7
chord for a bVII7 chord approaching the I chord by a whole step. This
works because the bVII7 has a lot of notes in common with an altered V7 chord. Example: Bb7-Cmaj7.

Why is all of this important?

I have a rule I call “The Jazz Improv Rule,” and it goes like this:

To become a better jazz improviser, you have to understand jazz harmony.

The more we understand how chord progressions work in the context of a piece of music, the more insight we can gain in how to improvise over them. It is worthwhile to spend some time digging into this stuff and make sense of it.

That’s exactly what we do in our eBook and companion course The Jazz Standards Playbook because this stuff is that important.

Start looking out for these two kinds of dominants 7th chords whenever you are working through jazz standards.

How to Master the Backdoor Jazz Chord Progression (By Josiah Boornazian) 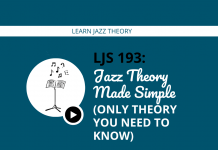 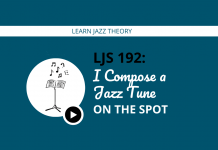 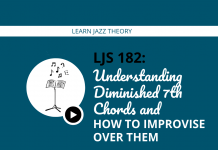 LJS 182: Understanding Diminished 7th Chords and How to Improvise Over Them (feat. Adam Levy)