How to Master the “Backdoor” Jazz Chord Progression

Knowing which types of harmonic maneuvers appear repeatedly in various standards allows you to isolate and work on them as stand-alone pieces of vocabulary. Taking the time to practice inventing improvised melodies that voice lead strongly through common jazz chord progressions, will help you more easily play through and learn new tunes that have similar chord progressions.

In this post, I want to focus on one of the most common pieces of non-diatonic harmonic vocabulary in jazz: the “backdoor” chord progression.

Let’s review the terms and concepts here before looking at some strategies for practicing the backdoor progression.

What is the backdoor progression?

There are two types of backdoor progressions:

1. A dominant 7th chord whose root is a whole-step below the target chord.

For example, in the key of C, the tonic major chord is C maj.7, and the backdoor chord is Bb7. It’s important to note that the backdoor chord does not resolve V7-I (i.e. with the root movement up a 4th or down a 5th), so it doesn’t usually work to fully alter a backdoor dominant 7th chord. (Be sure to review my post about dominant chords for more information about the chord alteration and scale implications of different types of dominant 7th chords.)

Here are some examples with sample piano voicings: 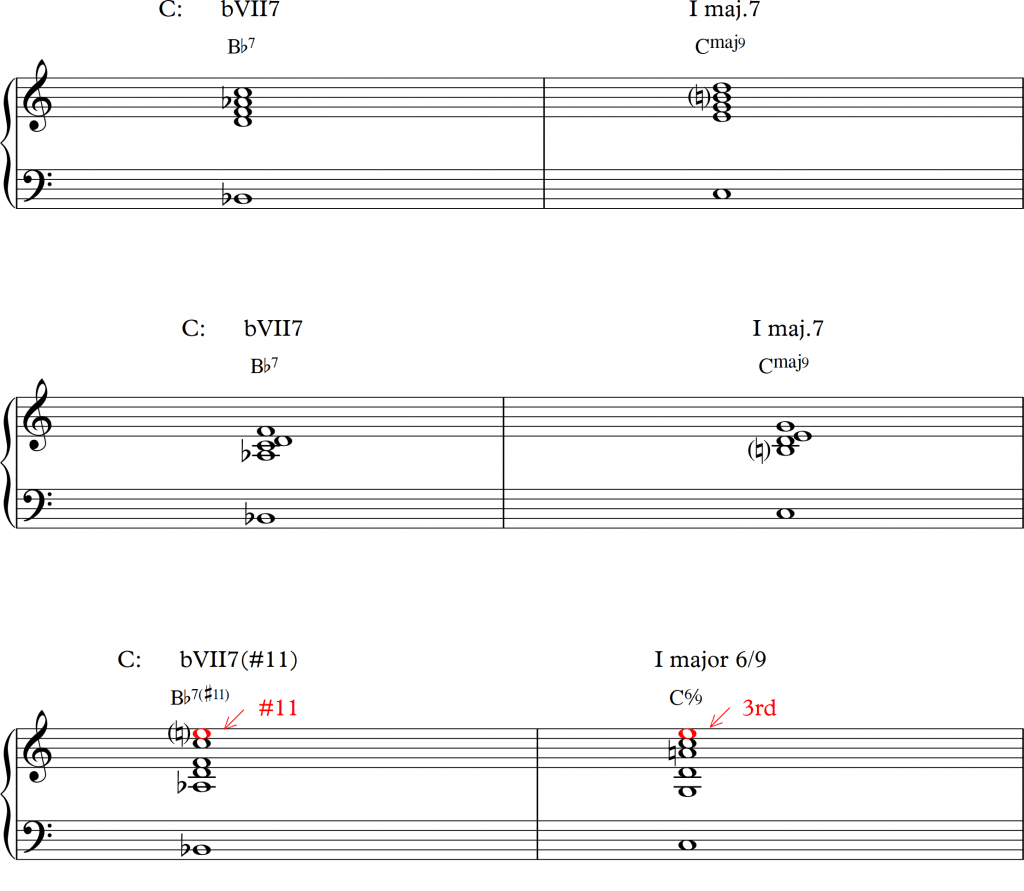 2. A II-V7 progression that resolves up a whole step from the V7 instead of to the implied I chord.

Again, if the target chord the backdoor II-V resolves to is a tonic major chord (I maj.7), then you could think of the backdoor chord using a Roman numeral analysis, in which case it is a IV-7 to bVII7 progression. In the key of C for example, the backdoor II-V would be F-7 to Bb7.

Normally the chords F-7 to Bb7 by themselves strongly suggest a II-V-I in the key of Eb, so we’d expect the next chord after Bb7 to be Eb maj.7. But in a backdoor progression, F-7 to Bb7 would then resolve to C maj.7. And again, the dominant 7th chords in the backdoor progression often include a #11, but they’re almost never fully altered.

Why and how does the backdoor progression function harmonically?

The backdoor progression works well because the voice leading from a bVII7 to a I maj.7 is smooth and sonically appealing. You can think of the backdoor as an expansion of the IV- to I maj. chord progression.

A IV-7 is often used before a I maj. chord in jazz, because it’s a variant of the IV to I “plagal” cadence which is a very common type of cadence (or chord resolution) in Western music,  along with V-I. The IV- to I is sometimes described as a type of “gospel” or “soulful” cadence because it is common in gospel and soul music.

In jazz harmony, it’s common to add the excepted V7 after a II- chord in a given key even if it’s not technically part of the original version of a song. So if you have a IV- and want to expand it into a II-V7, the “V7” in the key implied by IV- is bVII7 (bIII is the implied key center if IV- is the “II”).

Likewise, the reverse works: in most cases where you have a dominant 7th chord, you can add the “missing” “II-” chord that would appear before the dominant chord if it was functioning as a V7.

So in other words, in many situations it’s acceptable to treat a dominant as a V7 and added the implied II- chord before to create a II- to V7 in the key implied by the dominant chord (again, if the dominant 7th chord in question is a bVII7 preceding a I maj. 7 chord, bIII is the implied key center if bVII7 is the “V7,” so you can add IV- before the bVII7 to create a II-V in the key of bIII that resolves to I maj. instead of bIII major or minor).

On the other hand, you can view the bVII7 as essentially a “darker” sounding substitution for a V7 chord. The bVII7 gives you two of the key tension notes of a V7(b9): the b7 and b9. As a matter of fact, the basic 7th chord of a bVII7 is essentially just the upper structure of a basic V7(b9) but with a b3 instead of a natural 3.

Since there are so many common tones between a bVII7 and V7(b9), and since both voice lead smoothly into a I maj.7, the bVII7 works well as a substitution for a V7 chord in jazz standards. Here’s what I’m talking about notated for visual learners: 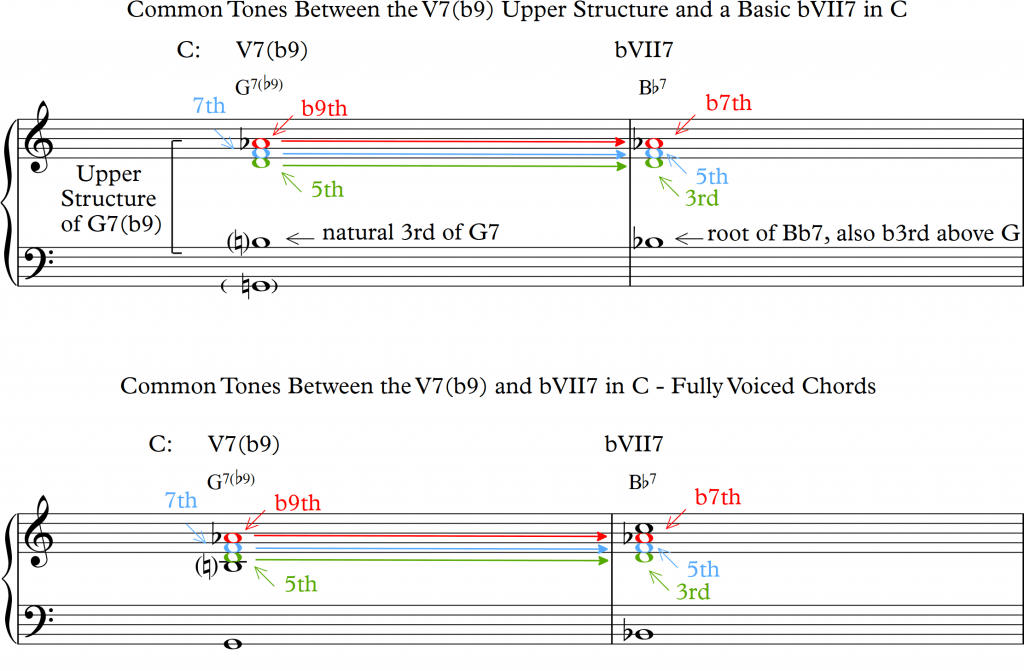 What are some examples of tunes which feature the backdoor progression?

How do you practice the backdoor progression?

The key to practicing the backdoor progression is to isolate the progression, slow it down, and practice coming up with melodies that use strong guide tones to resolve from the backdoor dominant 7th chord into the target major chord.

Here are some ideas to help you get started: 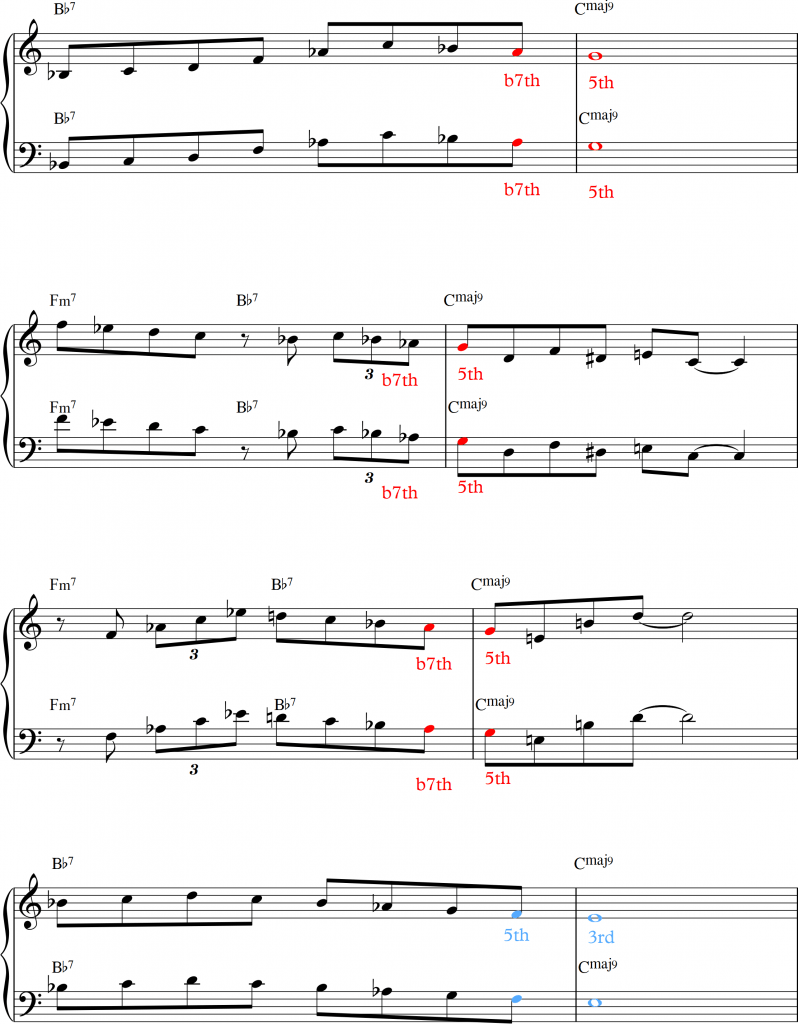 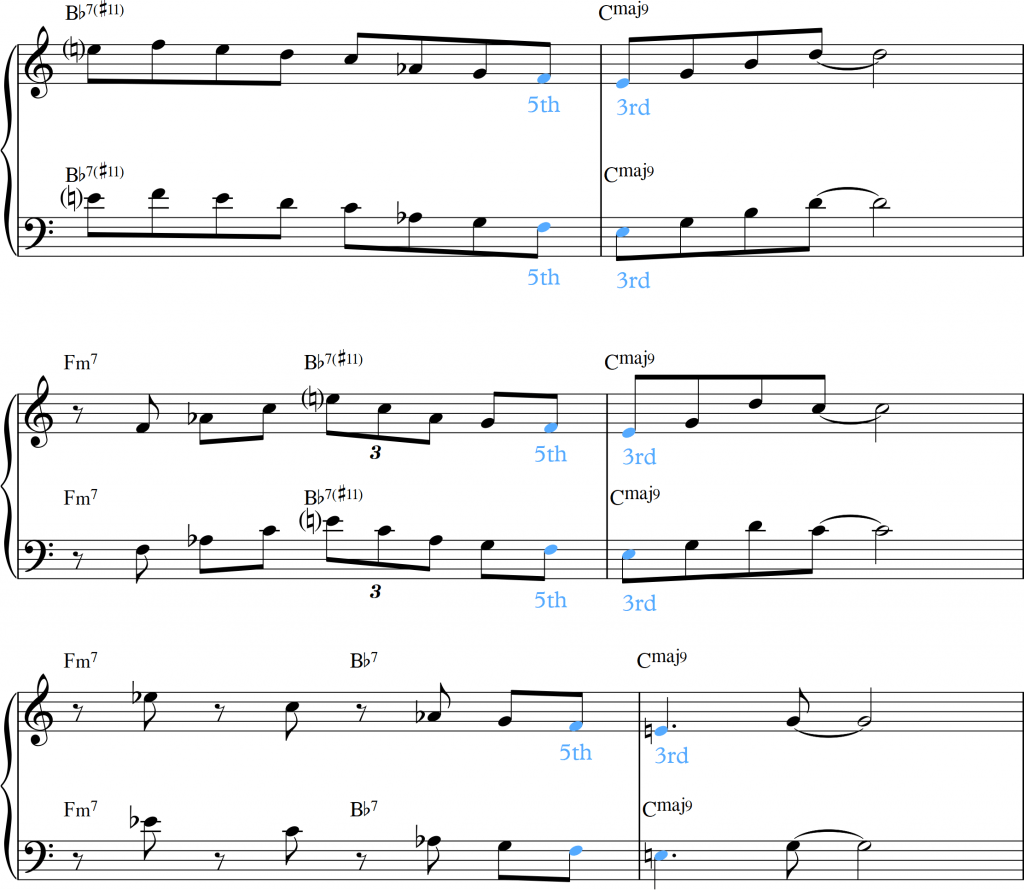