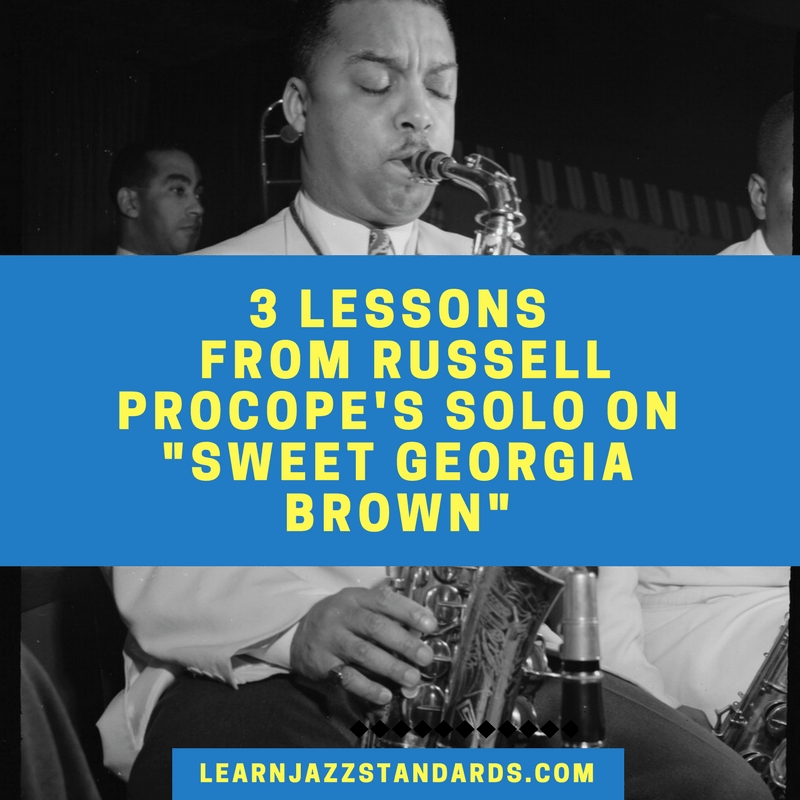 John Kirby’s ensemble was an important transitional group stylistically between the swing and bebop eras in jazz history. When I transcribed Procope’s solo, I learned a few key things I’d like to share with you here.

But before we dive into that, take a look and a listen to this solo. 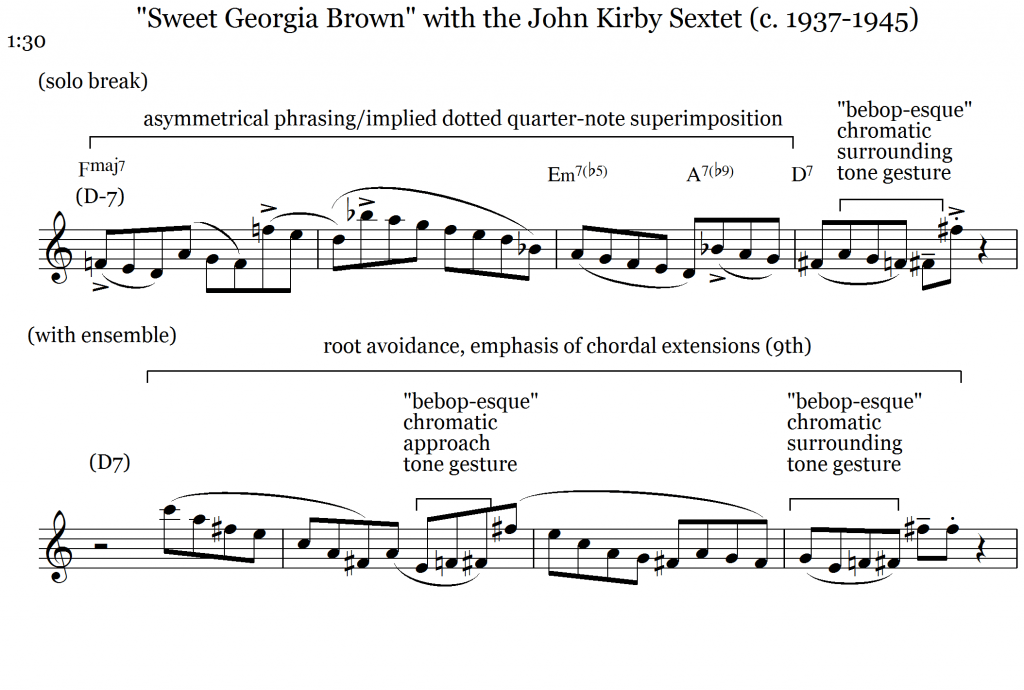 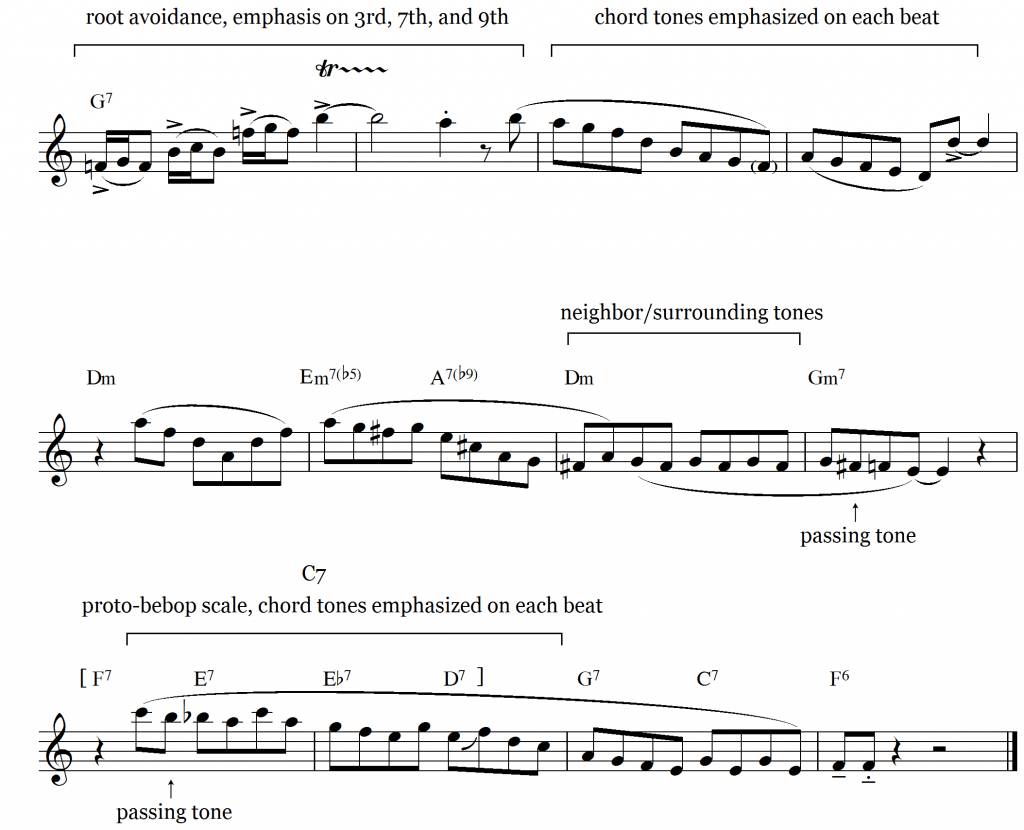 Here are three takeaways from the solo (the analyzed solo transcription is included below):

1. Use rhythmic displacement/superimposition as a device to generate rhythmic tension and musical excitement.

The John Kirby Sextet’s arrangement of “Sweet Georgia Brown” is performed at a sweltering fast tempo and the ensemble’s interpretation of the melody highlights the band’s apparent fascination with highly rhythmic gestures.

Procope’s solo on this virtuosic rendition of “Sweet Georgia Brown” begins with a remarkable unaccompanied solo break. He plays around with an idea based on eighth notes accented in melodic groupings of 3, which creates an implied dotted-quarter over 4/4 feel.

Since he uses essentially a 3/8 idea over a tune in 4/4 time, the starts and ends of each fragment of melody in the line he plays don’t line up on strong beats. Each time the melody sequences into another 3 eighth-note grouping, the phrase’s beginning gets shifted or displaced to different parts of the bar as the pattern unfolds.

Because of the dramatically frenetic tempo, the dazzling rhythmic displacement of Procope’s solo break is so startlingly disorienting that when the rhythm section resumes playing at the beginning of the next phrase, roughly eight measures pass before the ensemble seems collectively reassured that all the players are firmly settled into the correct place in the song’s form.

2. Avoid roots, and use bebop-style chromatic surrounding tones and the “bebop scale” to strategically add color and chromaticism to your melodic lines.

To create colorful sounding melodic lines, Procope sometimes avoids playing the root of the chord and instead only plays notes from the extension of the chord (i.e. the 3rd, 5th, 7th, 9th, and 13th).

Notice how he avoids playing a “D” over the D7 chord! Procope also uses surrounding tones and passing tones often to spice up his solo with chromaticism and to help him generate smooth lines with chord tones falling on the beats (see the annotated transcription below). In the first half of the last four-bar phrase of Procope’s solo, he plays what essentially looks and sounds like a C7 bebop scale (i.e. a C Mixolydian scale with the major 7th scale degree – B natural – added as a chromatic passing tone).

3. When dealing with fast moving chromatic chord changes, you can always look for a cadence point and simplify the harmony into a giant V7-I progression.

During the last 4 bars of the solo, Procope ignores the rapidly descending chromatic dominant seventh chords that underlie the harmonic structure and instead apparently simplifies the phrase into a V7-I (C7 to Fmaj6) cadence and exploits the bebop scale to full effect as he crafts a powerful cadential phrase to conclude his solo.

This strategy frees him up from having to try to snake his way through the complicated chromatic chords in the first two bars of the last system in the solo and allows him to come up with a simpler and more clear closing melodic statement.

I hope you find this solo as helpful and inspirational as I did!

Facebook
Twitter
Previous article
Understanding African Music and the Origins of Jazz (feat. Joe Agu)
Next article
How to Use Tritone Substitution In Your Jazz Improv