Most of the time, II-V-I’s are taught as a set of discrete modes or as a collection of related modes derived from a single parent scale. We’re told the II-7 chord corresponds to a Dorian minor scale, the V7 a Mixolydian dominant scale, and the I(maj7) either a Lydian or Ionian scale. Or, on the other hand, we often hear that you can treat the whole II-V-I as essentially one scale all based off of the Ionian (major) mode played from the root of the I chord.

Although these are sometimes useful approaches and can offer a very basic framework to help novice jazzers get started with improvisation, I think there are even better ways to conceptualize II-V-I’s regarding specific scale choices. I’ve already briefly delved into bebop scales here on the LJS site before, and in this post, I want to talk about another lesser known or “secret” scale: the harmonic major scale.

In my experience, relatively few jazzers talk about or teach this scale, but it is possibly the single best scale to use if you want a simple and concise tool to help you start generating bebop vocabulary over II-V-I’s. And it works for both major and minor II-V’s (details on that below)!

Firstly, what is the harmonic major scale?

It’s essentially like a harmonic minor scale, except it has a natural (not a flatted) 3rd scale degree, as you would assume for any scale labeled “major.” In other words, it’s a major scale with a flatted 6th degree. C harmonic major is spelled: C-D-E-F-G-Ab-B-C.

Here it is notated:

To understand the derivation of the harmonic major, we have to briefly explain where harmonic minor scales come from.

The “harmonic” label comes from the fact that, in the language of Western “classical” music theory, the harmonic minor scale has all of the elements necessary for generating tonality, i.e. tonal chords and harmonic progressions. For tonality to be functional melodically and harmonically, you have to have a leading tone

For tonality to be functional melodically and harmonically, you have to have a leading tone as the 7th scale degree (the 7th note of the scale has to be a major 7th above the root, or a half-step below the tonic – however, you want to visualize it). This is because, in the briefest and simplest terms possible, tonality is essentially defined by the V7-I cadential relationship, which lives and dies on the resolution of the “tension” inherent in the tritone.

These relationships – the V-I movement in the bass and the resolution of the “tense” tritone which is embedded in the V7 chord – is the defining theoretical feature that makes tonality work in “classical” theory.

Here’s what I mean in notation:

So what this means is that,  to generate common practice functional tonal harmony, you can’t rely only the Dorian, Phrygian, or Aeolian (also called “natural” or “pure” minor) modes, which are all minor modes with flatted 7ths (because they don’t have that all-important leading tone).

The other primary option for a minor scale – the “melodic” minor – has the requisite leading tone, but it has a natural 6th which means the IV chord would be major, and this doesn’t work with strict “classical” harmony norms – in the minor mode, the “i” and “iv” chords should both be minor.

The harmonic major is perfect for generating hip II-V-I lines because it has the b9 of the V7 chord embedded in it and it allows you to simplify the entire II-V-I into one single reductive scale. In addition to simplifying the way you think about

In addition to simplifying the way you think about a II-V-I, the harmonic major automatically liberates you from that often droll “church mode” sound and gets you playing a hip, “exotic” sounding scale.

Ok, so how do you use the harmonic major scale?

Here are a couple of examples of II-V-I lines in major and minor using the harmonic major scale (note how in many cases, you can play the exact same line for both the major II-V-I and its relative minor II-V-I – and it works great!): 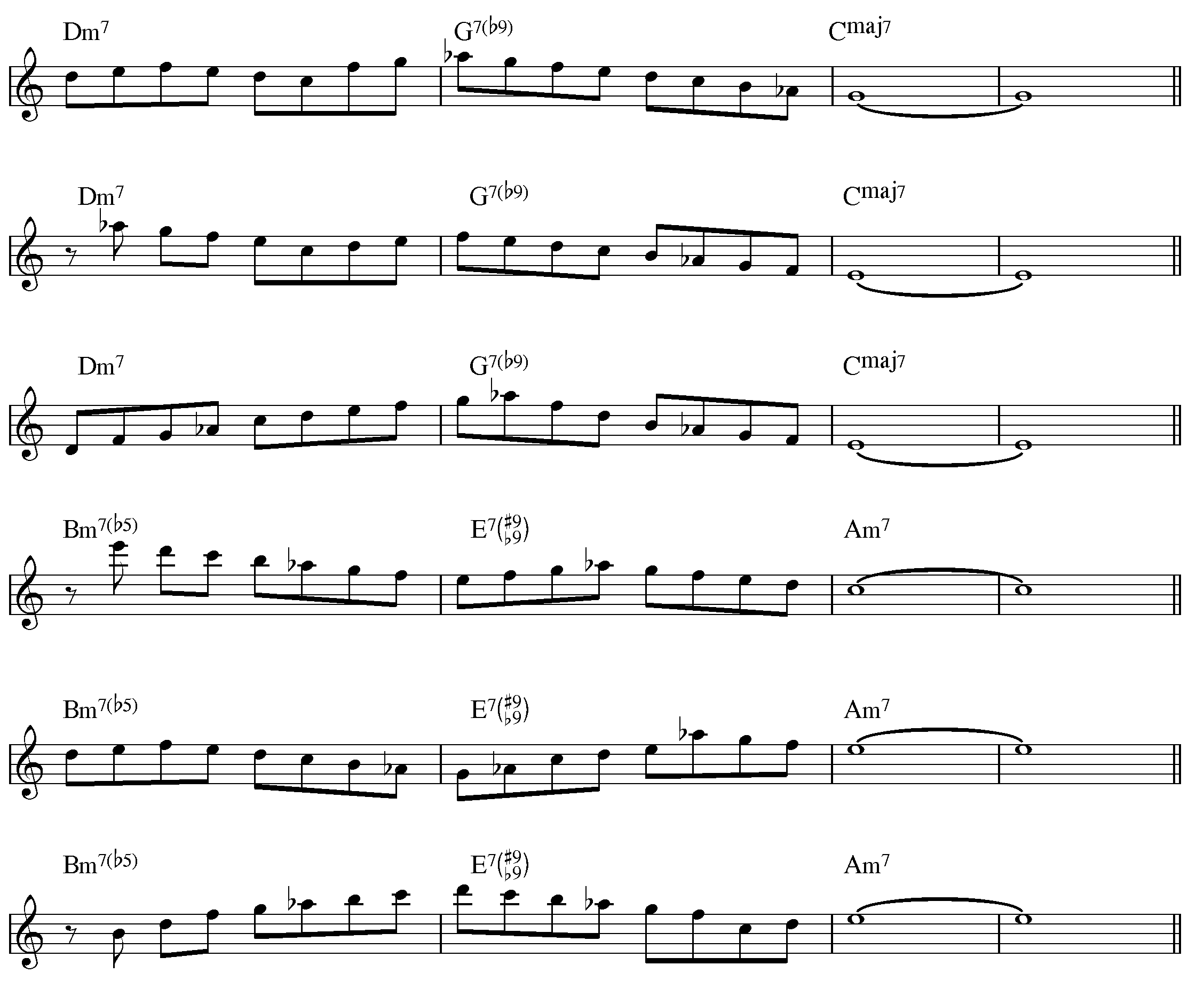 I hope you find this helpful and inspiring, and I hope you feel empowered to go out and practice and explore the harmonic major scale!

Facebook
Twitter
Previous articleLJS 64: 5 Tips for Never Losing Your Place In a Jazz Standard
Next articleJazz Lick of the Week #17: “Ornithology Lick”