How to Improvise Over “Stella By Starlight”

Stella By Starlight is arguably one of the most popular jazz standards of all time. As one of the most commonly called “workhorse” songs on gigs and jam sessions, this is a must-know tune for jazz musicians.

“Stella,” written by Victor Young, was featured in the 1944 film The Uninvited. Ned Washington later set lyrics to it in 1946. This iconic song has been recorded and performed by many of jazz’s greatest artists including Ella Fitzgerald, Miles Davis, Bill Evans, Keith Jarrett, and Chet Baker, so there are a lot of great recordings out there to check out.

Also a highly flexible tune, Stella can be played as a ballad, at medium tempos, at fast tempos, as a straight-8th tune, and it can even be morphed into odd meters.

As has been mentioned on LJS before, Stella is a harmonically complex and challenging tune, and by learning it you will greatly expand your horizons and vocabulary as an improviser.

2) Taking advantage of all the melodic minor scale.

Let’s start by making sure we know the tune and its form well, and then we’ll tackle the 3 approaches mentioned above to help us maximize our creativity as we improvise over Stella.

First, locate a good recording of the song and listen to it many times. Each time listen for something different. Start by focusing on the melody (and lyrics if present), then zero in on the harmony, the bass movement, the drums, the solos, etc. one after another until you are very familiar with that recording.

Next, learn to sing the melody of the tune by ear (don’t worry if it’s not perfectly in tune!). Then learn the melody by ear on your instrument by carefully copying what you hear from the recording.

Take your time and really focus on the details of the performance you’ve chosen to learn the song from. Pay close attention to the phrasing, timing, and subtle nuances of the artist’s melodic interpretation of the tune.

Finally, learn the harmony by ear (and refer to a lead sheet only to check your work or if you get seriously stuck). Learn the changes by finding out by ear what notes the bassist plays on the downbeats of each measure first (they’re almost always the roots of the chord progression), then try slowly arpeggiating the chords and playing the scales that sound like they fit best with the harmony you hear on the recording.

The best way to learn jazz standards is to break them down and learn them in units, linking the melody with the harmony. Psychologists and pedagogical experts have labeled this approach “chunking” since you slice up the material into bite-sized informational chunks that are easily digestible. It’s also useful to think about the key center(s) of a given tune and to relate the harmonic/melodic/formal chunks you’re studying to each other and to the overall form of the tune.

Here’s a link to the lead sheet with the chord changes for reference to help guide you through the material below.

And here’s a link to LJS’s play-along for Stella.

Notice how Stella has a 32-bar form divided into 4 smaller 8-bar phrases like many other jazz standards, but Stella is also unique in that it doesn’t follow either of the two most common song forms: it’s not AABA like a “rhythm changes” tune or a song such as Take the ‘A’ Train, and it’s not ABAB (or the common variants on this such as ABA’B’ or ABAC, etc.) like Beautiful Love for example.

Stella is best analyzed as following an ABCA’ form, where A’ (“A prime”) is a variation or alteration of the first A.

Let’s look at the key centers and harmonic relationships of “Stella.” Here is an analysis of the form using roman numerals for those of you who are visual learners: 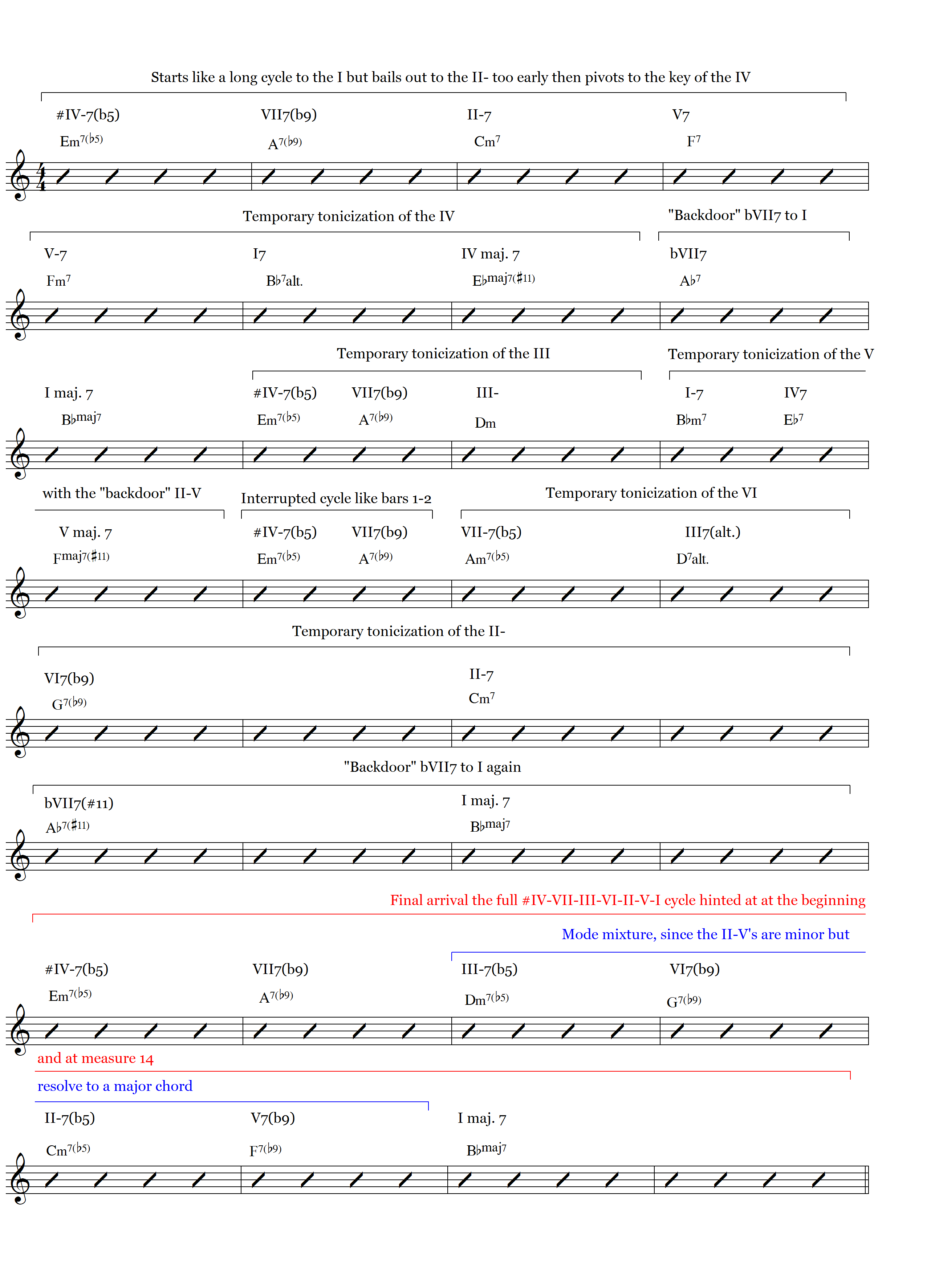 Here’s a video analysis that has a slightly different take on the chord changes:

Guide-tones are key pitches in the chords that strongly identify and outline the changing harmonies of a tune. Guide-tones can be roots and 5ths, 3rds and 7ths, or any combination of these pitches and notes chosen from the extensions of the chords, such as 9ths, 11ths, and 13ths.

There are countless options for selecting effective guide-tones for any given song. To use guide-tones, pick out the notes that most clearly outline the harmony for your ears, practice them by themselves as whole notes, half notes, and/or quarter notes, then use them as a skeleton or framework to start building more complex melodies around by adding and subtracting pitches, filling in the melodic spaces, and varying the rhythms.

Since the roots and 5ths are most likely covered by the bassist, 3rds and 7ths are usually the strongest starting places to build a solid guide-tone line for a tune like Stella. Here’s a basic guide-tone melody (the “skeleton” or “frame”) for Stella followed by an example of a full-blown improvised melody based on the same guide-tone line: 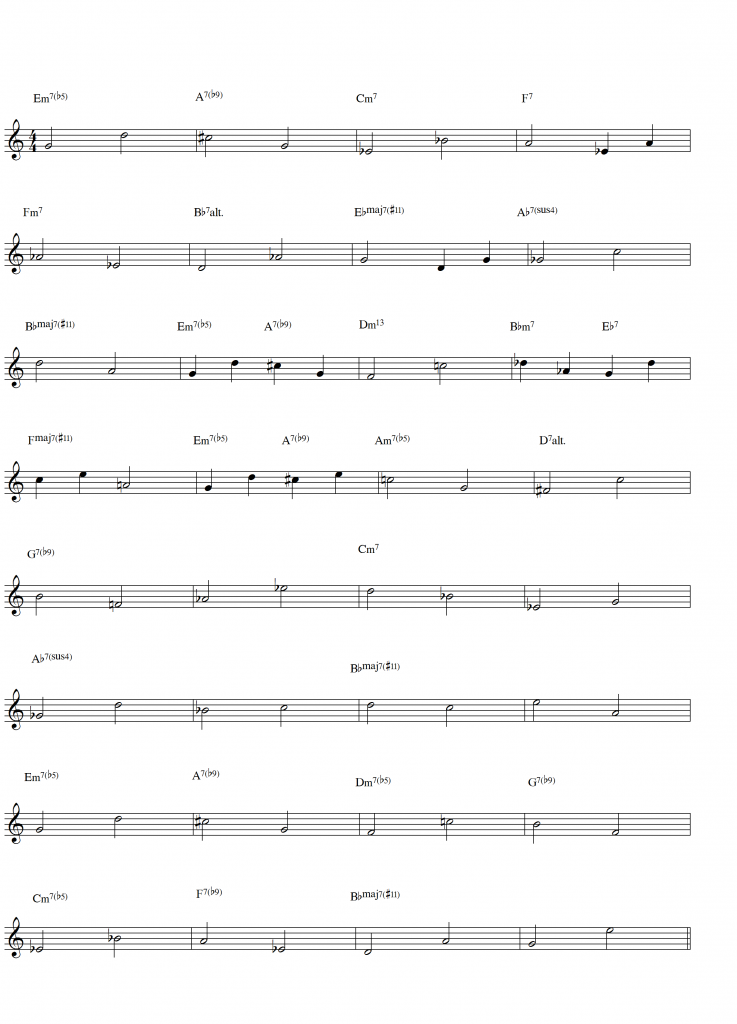 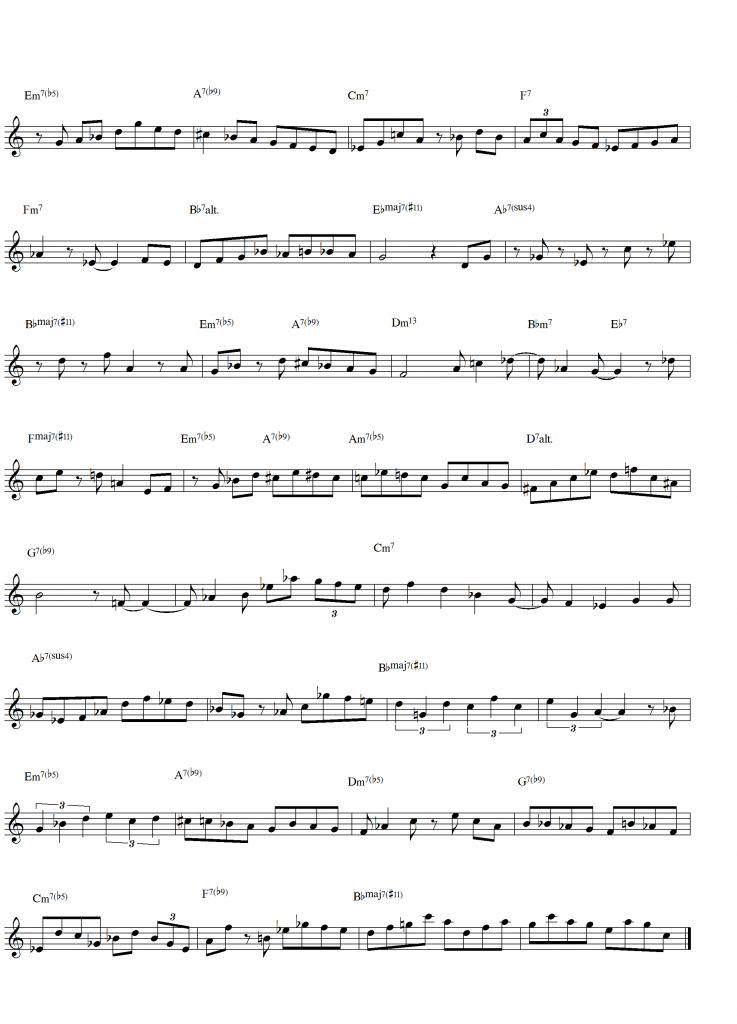 Melodic minor scales are most commonly used in jazz:

Here’s a visual of all of the spots you can use melodic minor in Stella, with other modes used when it makes sense to do so: 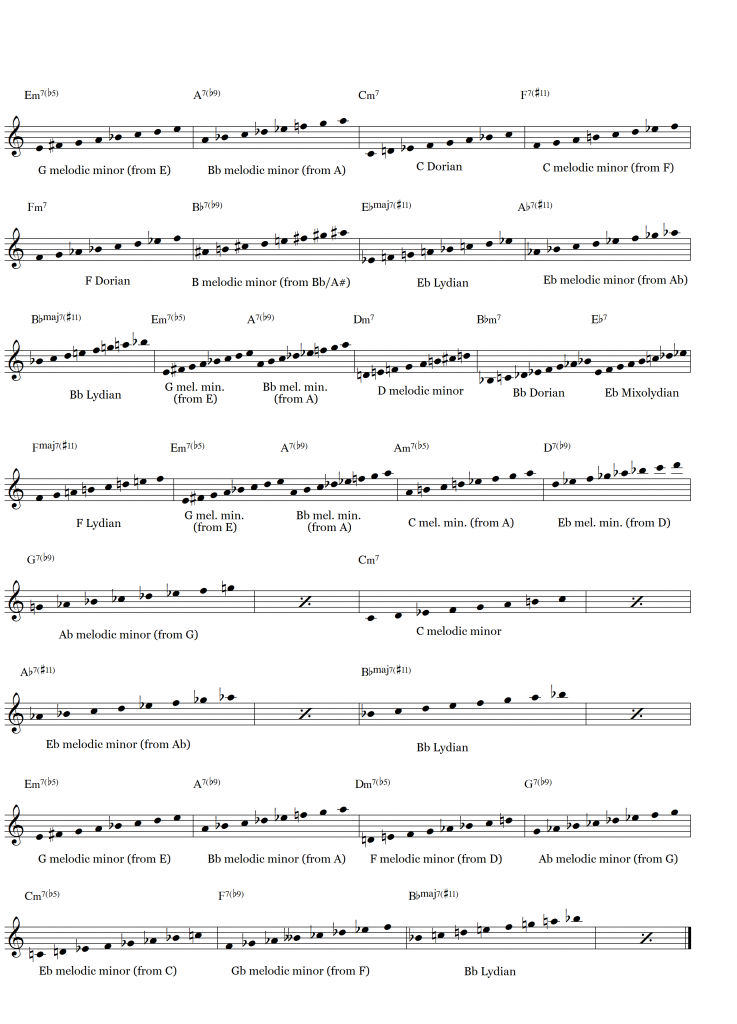 Triad pairs are exactly what they sound like: a pair of triads (usually but not always major triads) that you can use over a given chord or chord progression. Triad pairs are effective tools because they limit your note choices in a way that forces you to be creative and breaks you out of a scale-based approach to melodic improvisation. They also often lead to ear-grabbing and melodically strong statements because triads are such clear and common melodic structures that abound in Western music.

When using triad pairs, it’s most effective if you stick only to the triads and their inversions, but you can also mix the triads together, which often leaves you with a pentatonic scale (if the triads share a common note) or hexatonic scale (or perhaps even a 4-note scale if your triads have 2 common tones between them).

Here’s a visual of the sets of triad pairs you can try out over Stella: 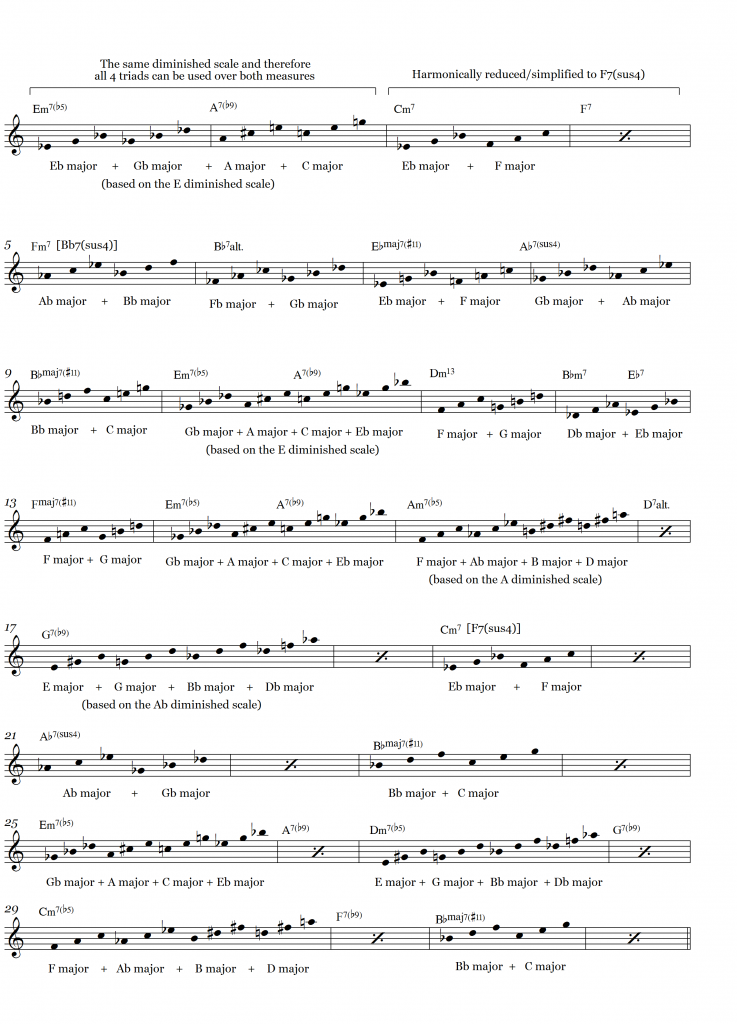 Stella by Starlight is a fascinating tune and there is so much to be learned about music and improvisation from studying it. I hope you’ll dig in deep and apply some of these concepts to your playing. Happy practicing!

Facebook
Twitter
Previous articleLJS 78: How to Master Hearing Intervals and Level-Up Your Ears
Next articleHow to Develop Your Ear to Instrument Connection