Double Your Scale Practicing Efficiency with this Bebop-Diminished Pattern 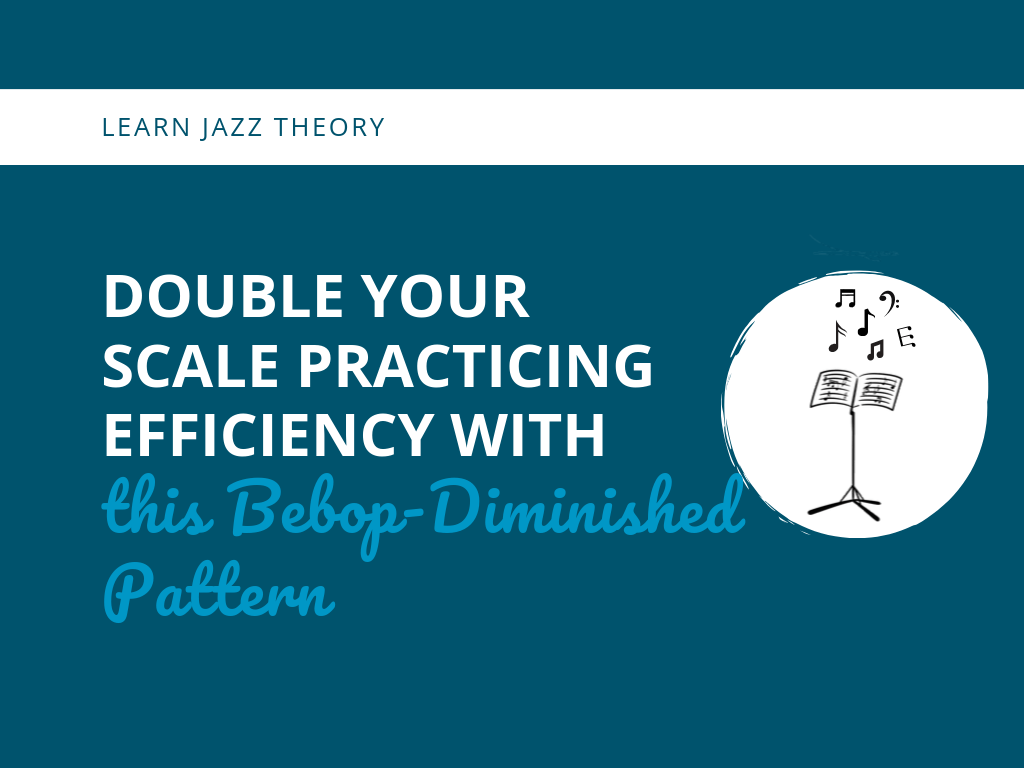 All musicians must practice scales at some point in their musical development. Scales are some of the most fundamental building blocks of Western styles of music, including jazz.

As musicians, indeed we’re often told how important it is to practice scales and how useful they are for helping us navigate jazz standards. But too often working on scales and using them while improvising can turn into a dry and uninspiring activity.

In addition, when improvising we don’t want to be thinking about playing scales in a formulaic way. Scales in and of themselves are not musical. But when we think of them as pitch collections, it can open up our understanding of what note choices we can choose from in a given musical scenario.

Everyone seems to be pressed for time these days as well, so in this post I want to give you a practical exercise to work on two different types of scales simultaneously.

Hopefully, this scale workout will also prove to be useful in helping you to generate ideas for jazz vocabulary while improvising.

So what’s the exercise?

It’s a scale pattern that you can apply over a II-V7 progression.

You might want to review my post about bebop scales, but I’ll give you a quick recap of all you’ll need to know for this exercise here anyway. One of the most common bebop scales is the dominant seventh (or Mixolydian) bebop scale.

The idea behind the bebop scale is that you can reduce the II-V to just one big V7 chord. In other words, the dominant seventh bebop scale is also useful over diatonically paired minor chords when you’re playing II-V-I’s.

You can play one scale over both the II- and the V7 chords. In other words, just treat the II- chord like a V7 chord in the same key, which works since both modes come from the same parent scale and therefore comprise the same pitches.

For example, D Dorian minor (D-7) and G Mixolydian (G7) have the same notes, as both are derived from their “parent scale” – C major.

The bebop scale is often used primarily as a descending melodic scale, but you can use it in its ascending form as well.

This scale is also sometimes called the “auxiliary diminished” scale or the “b9” scale, this is similar but not identical to the altered scale. Note that the diminished dominant scale has a natural 13, not a b13, and it has the perfect 5th above the root, which is not the case with the altered scale.

So, over a II-V-I in C major, you can play up the G7 bebop scale on the II- chord and down the G diminished dominant scale on the V7(b9) chord. If you’ve done it correctly, you’ll land conveniently on the 5th of the tonic I chord on the downbeat of the 3rd measure. Here’s what I mean: