How to Navigate Autumn Leaves

One of the most popular jazz standards of all time is “Autumn Leaves” by Joseph Kosma. It’s often one of the first jazz standards that aspiring jazz musicians learn to play and for many good reasons.

Autumn Leaves is an excellent jazz standard to start with because it covers some basic chord progressions and harmonic concepts found in jazz. If you can understand how the harmony of Autumn Leaves works, you are well on your way to understanding hundreds of other jazz standards.

So in today’s lesson we will be diving into this important jazz standard, unpacking it’s harmonic movement and covering important theory and improv concepts this tune presents.

Oh hey, and if you like this, you may want to consider checking out our eBook and companion course, The Jazz Standards Playbook.

Let’s start out by learning more about this composition.

The song has an AABA form, meaning the first theme (or section) is repeated, followed by the second theme, and ending on the original theme. It has two common played keys: concert G minor and E minor.

Keep in mind, that if your instrument is not a Concert C instrument (like guitar and piano) you should know how to transpose to your key.

When learning or working on a song, the most important thing you can do is listen. Listen to as many versions of Autumn Leaves as you can. Below are some that I suggest, and I’ve linked them to Amazon so you can purchase them if you wish.

Cannonball Adderley from “Somethin’ Else” 1958

(Note: on the Boss Tenors recording there is some added harmonic movement outside of the original chord changes)

Now, due to copyright issues, I can’t post the melody of Autumn Leaves. However, I always suggest learning the melody by ear. If you read the melody from a piece of sheet music you may get the boiled down, basic idea of the melody, but you miss many of the nuances. It’s always better to learn it by ear by cross referencing different recordings. Pro tip: check out that Sinatra recording. Frank always sings the melody “straight.”

To understand Autumn Leaves and the chords analysis I am about to show you, it is imperative that you understand how chord progressions work. I have covered this extensively on our blog, so I don’t want to spend much time doing this.

But for a quick summary of both, they result in these two charts which essentially show you how chords work to create chord progressions.

Understanding these two charts will be important for today’s lesson. Autumn Leaves is almost entirely made up of major and minor ii-V-I chord progressions. You need to understand the roman numeral numbering system as it pertains to this chart.

For example, using the Major Diatonic Series of 7th Chords chart you can conclude that a major ii-V-I in concert C is:

By using the Minor Diatonic Series of 7th Chords chart you can conclude that a minor ii-V-i in Concert C is:

Again, if any of this confuses you, go check out those posts I suggested. With all of this in mind, let’s take a look at the chord changes for Autumn Leaves and start looking at what is going on with the harmonic movement. 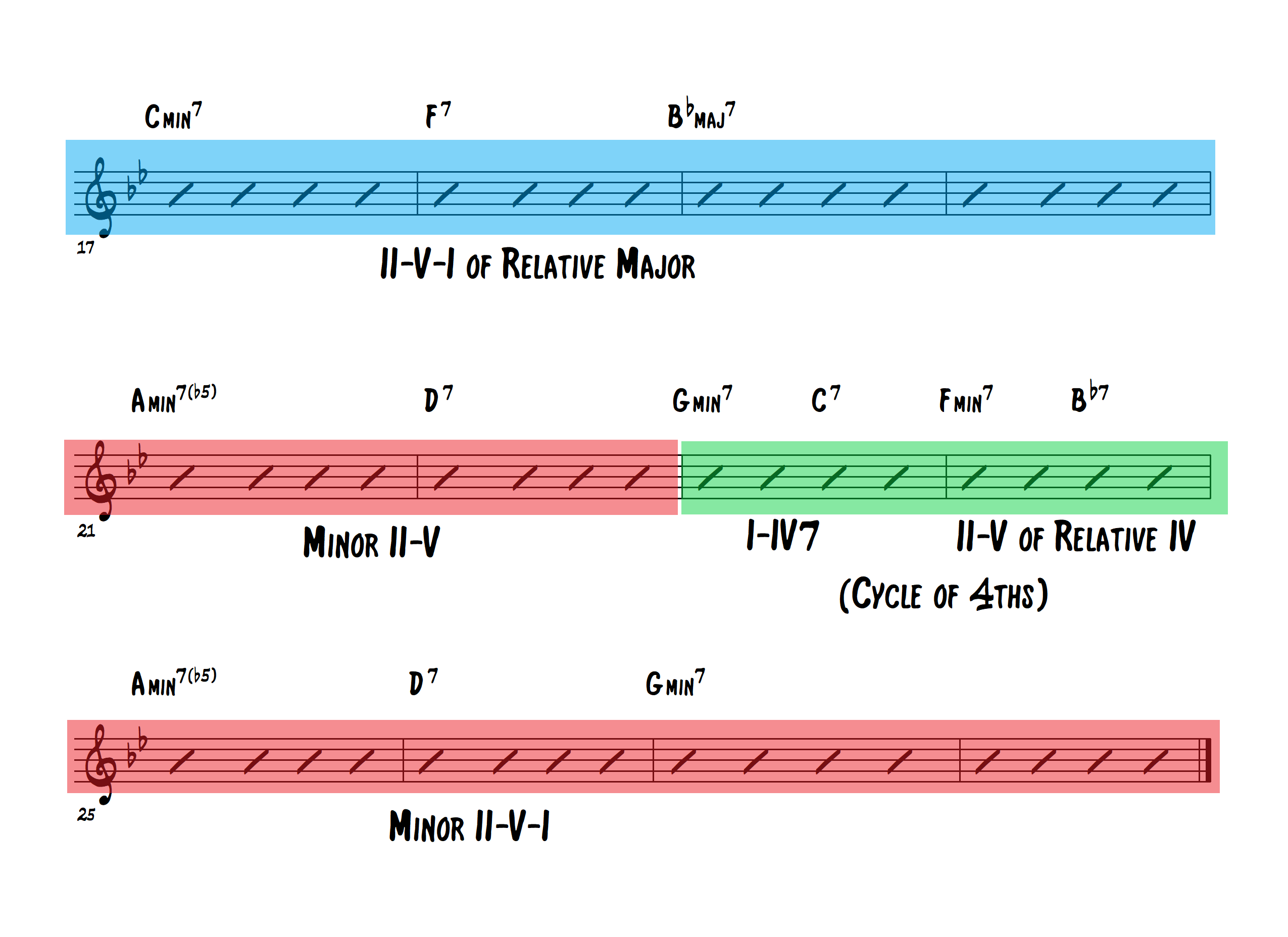 As you can see, I have color-coded different sections of the form to help you understand what is going on with the chords and chord progressions. Let me quickly identify them:

Green= a section of cycling 4ths.

The first thing I want to observe about Autumn Leaves is how it shifts between the relative major and minor keys.

What are relative keys?

Major and minor keys that share the same key signature are called relative keys. Essentially, they share the exact same notes as each other.

Autumn Leaves is in the key of concert G minor. Take a look at the G minor scale.

From the minor key you can either memorize it’s relative key, or use this trick:  think a major key a minor 3rd up from the minor key (or vise-versa). In the case of G minor what would that be? Bb major.

Here is a Bb major scale, and as you can see, they share the exact same key signature. Fairly simple, right?

Autumn Leaves is the perfect study of how relative major and minor keys work together. The entire song is essentially switching between the two, with the exception of one section.

Let’s take a look at it.

If there is any slightly confusing part of Autumn Leaves this would be it. However, it’s not really all that strange when it comes to jazz harmony.

It starts out on the root minor, and moves to a dominant IV chord. The movement of the root notes in 4ths is very common in jazz harmony, and we’ll go over that more next. The IV chord in a minor key is normally minor, but jazz musicians are constantly turning minor chords into dominant 7 chords.

From there, you can consider the second bar a ii-V chord progression to the relative major IV chord (Eb), although it doesn’t resolve.

I personally find it beneficial to think of both of those bars as isolated ii-V chord progressions with no attachment to any particular key. After all, they are just passing chords that ultimately resolve to a minor ii-V-i of G minor.

The second big thing to observe about Autumn Leaves is that it is almost entirely ii-V-I chord progressions both in the minor and relative major key.

When it comes to jazz, there is no more important chord progression to know than the ii-V-I. You will see it come up time and time again, and so you need to be able to recognize it right away, and of course, know how to improvise over it.

The form starts out with a ii-V-I in the relative major key.

This is where knowing your Major and Minor Diatonic Series of 7th Chords comes in handy. You will want to know how to transpose ii-V-I’s into all 12 keys.

If you know them well, you can quickly identify that Bb is the relative major of G minor, and that Cmin7-F7-Bbmaj7 is a ii-V-I in the key of Bb major.

Let’s take a look at the transition into the parent minor key.

The Ebmaj7 is the IV chord of the relative major and it serves as a transition chord into the parent minor ii-V-i.

The beauty of Autumn Leaves is that it is fairly simple when it comes to jazz harmony all while covering two pivotal harmonic concepts.

One of the most common questions I get is “how do I make the chord changes come out in my solos?”

In other word, if you started improvising without accompaniment would a listener know you were playing Autumn Leaves (assuming they are familiar with the song)?

The key to achieving this is knowing how to outline the chord changes in your improvisation. Guide tones are the perfect starting point. We have talked extensively about guide tones in another lesson, so be sure to check that out if this is new. But here’s a crash course:

In jazz, the guide tones are almost always the 3rds and 7ths of each chord.

Let’s take a look at a ii-V-I in C major for example:

Here’s what this looks like when the guide tones are played melodically and using a concept called voice leading (in this case, connecting the last guide tone in a step-wise motion with the proceeding chord).

With all of this in mind, here is a guide tone chart for Autumn Leaves. It can be incredibly helpful to map this song and other songs with guide tones. 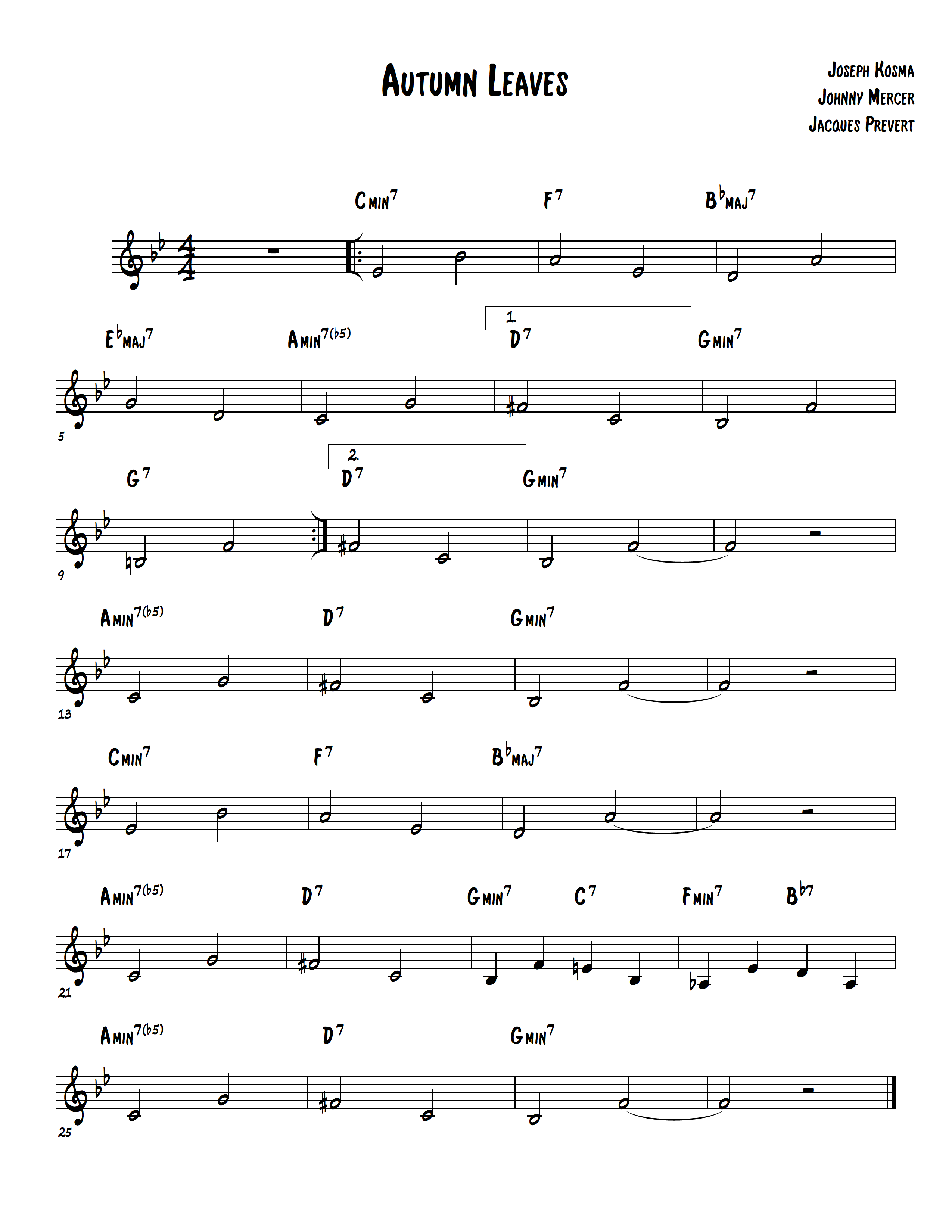 Keep in mind, there are many different ways to voice lead guide tones. So feel free to experiment with this for yourself. Play through these guide tones and then try targeting them in your improvisation.

Autumn Leaves is a great jazz standard to study and many lessons can be learned from it. It can be helpful to analyze jazz standards like this and break them apart. Spend some time working on this standard and be sure you understand it. Unlocking this one means you will be unlocking many others in the process.

If you want more jazz standard studies like these, but even more in-depth, be sure to check out our eBook and companion course, The Jazz Standards Playbook.

Facebook
Twitter
Previous articleHow to Get the Very Most Out of Your Jazz Solo Transcriptions
Next articleUnderstanding African Music and the Origins of Jazz (feat. Joe Agu)