3 Melodic Secrets I Learned from the Jazz Masters 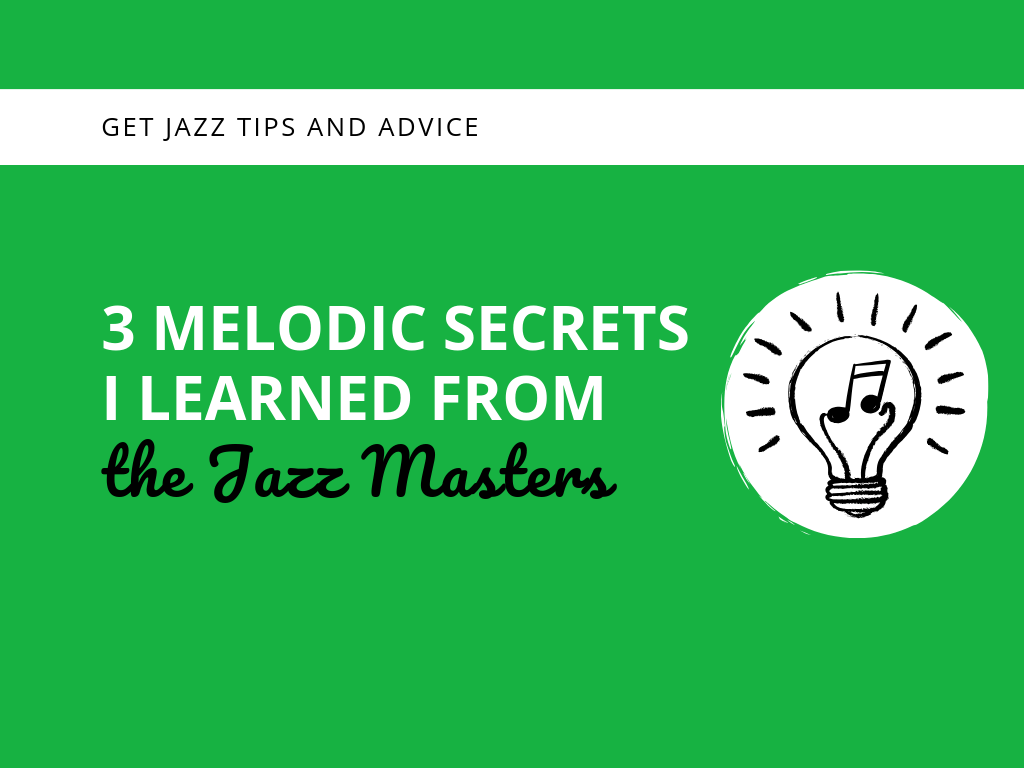 In my early years as a musician, I explored what I think is a pretty common approach to learning jazz improvisation. I was taught (or read somewhere) that the key to improvisation is to memorize scales/modes that corresponds to the chords in jazz harmonic progressions such as the ii-V-I. I tried plunking my way through ii-V-I’s in a dull, uninspiring, mathematical way: I’d plug in the mode/scale that corresponded to the chord I was playing over, and I’d play up the scale.

Literally, everything I was doing was wrong. Or at least, it wasn’t very effective, expressive, “authentic” sounding, exciting, or inspiring.

First of all, I didn’t know yet that theory comes after practice, not the other way around. In other words, music comes first, theories about it come later. Some strategic theorizing after the fact is extremely useful because it allows us to develop a common language to talk about the music. With a theoretical model in place, we can more easily frame, analyze, and communicate the musical practices and preferences that prevail in and are characteristic of a given style.

That being said, the iconic musicians who innovated the styles of music we now recognize as jazz and its sub-styles weren’t often (if ever) thinking about scale-chord theory as it is often taught nowadays. Too often jazz is taught in terms resembling this: “learn this mode, play it over this chord, and repeat this process whenever the chords change.” In my experience, this is terribly ineffective.

In this post, I want to focus on a few alternative approaches to learning and teaching jazz improvisation. I’ll introduce some (relatively) unconventional ideas that center around how we learn to construct jazz lines melodically.

Here’s what I learned from reevaluating my approach to learning jazz improvisation:

First of all, and perhaps most importantly, the scale-chord theory approach I mentioned above doesn’t place enough emphasis on the importance of two critical learning tools that are essential for jazz: listening and ear training. It’s worth going into detail on these topics here:

1) One problem with the traditional scale-chord approach I describe above is that it lets learners try to tackle jazz improvisation without listening to paradigmatic jazz performances first.

This is a huge problem. This is related to the idea that, again, theory comes after practice, not before. Music (sounds, not theory) should always come first. Goal-oriented, concentrated music listening should occur before learners try to tackle jazz theory and improvisation. Although the old scale-chord theory model is sometimes a useful teaching/learning method because it allows inexperienced players to potentially break out of their shells and immediately dive into improvisation with minimal preparation (since all you need to know is the basic modes and the chords they correspond to), it ignores the fact that jazz in many key ways is like a language.

You can’t learn to speak a language if you don’t listen to native speakers converse first in order to learn vocabulary, pronunciation, syntax, etc. Likewise, you can’t expect to improvise fluently merely by learning scale-chord theory. We should engage with jazz as a living language first, and maintain a musical dialogue with the jazz tradition throughout our educational journeys (which should be a lifelong pursuit for all of us!). Listening with intent and focus to celebrated, experienced, and expert jazz players perform live and on record is absolutely key to learning how to improvise in this style.

2) Another thing is, when you do listen to great jazzers improvise, you’ll find they rarely (if ever!) play the way many people are taught to play jazz early on.

World-class jazz musicians rarely if ever simply play ascending scales/modes over chords – which is precisely the bland approach to soloing that I originally thought was the “correct” way to learn how to improvise.

One of my many epiphanies about the inadequacies of the old scale-chord model came when I started working my way through all of Charlie Parker’s solos in the famous Omnibook. Look through the book and you’ll quickly discover that the lines Parker improvised in his iconic solos rarely if ever mirror the stepwise-ascending-modal-scale melodies many inexperienced musicians start out playing. And Parker is just one of innumerable examples of musicians who demonstrate that jazz’s musical vocabulary can’t be reduced to modal scales and chords (with perhaps the exception of the very narrow field of modal jazz – but even with modal jazz, the old scale-chord theory doesn’t tell the whole story).

The importance of listening to great musical performances from the jazz tradition and learning the complex and multi-layered nuances of jazz vocabulary by ear cannot be overemphasized.

3) Yet another big problem with the old scale-chord approach is that it divorces the process of learning jazz improvisation from the discipline of training the ear.

If you know your basic traditional scale-chord theory, you can wade your way through most jazz standards without playing any obvious “wrong” notes, but you’ll most likely sound bland, boring, unidiomatic, unexpressive, and emotionally flat if all you do is plug in ascending scales over chords when you improvise solos.

Music is fundamentally a sonic phenomenon, so the sounds – and therefore ear training – has to come first and be an integral part of the learning and performing process from day one. Again, music is like a language, and you need to train your ear to hear what’s going on in terms of the music’s “vocabulary,” “pronunciation,” and “syntax.” Learning scale-chord theory is useful, but only if it is combined with ear training. More important than knowing scale-chord theory intellectually is knowing how to recognize different chords, scales, and common chord progressions by ear. The ability to learn and recognize standard jazz vocabulary by ear combined with solid fundamental instrumental technique and the ability to transfer what you hear around you or in your imagination into sounds on your instrument are the keys that open the door to true improvisation.

Putting all this together, here are the three big epiphanies I had – which arose from the discoveries I discussed above – about how to learn to more effectively construct impactful jazz melodies/lines. And keep in mind these are merely generalizations – albeit highly useful ones – they’re not meant to be read as “laws” or “rules” that are absolute, unbreakable, or always applicable/desirable:

The “natural” tendency that has developed in jazz vocabulary over the years is to favor arpeggiation and wider intervals in an ascending melodic direction. This is not to say that players never run up scales, because they sometimes do. But in general, jazz lines feel more idiomatic when they arpeggiate chords in ascending patterns. This idea is a stark contrast to the emphasis on ascending modal scales that many beginning jazz musicians start out with. It’s a simple trick, but will open up a totally new and more “authentic” set of vocabulary for learners. In conclusion, stop playing up scales, and instead, play up chords and wide intervals

3) Stop thinking about chord progressions as a series of disconnected chords based on separate modal scales and start thinking in terms of a single scale that works over many chords.

For example, here’s an ironic discovery that is a huge tip: when playing over a ii-V-I, simply play the scale of the key you’re in from the root in a descending stepwise motion, and you’ll sound great.

It seems embarrassingly or childishly simple if you’ve been taught that “a ii-V-I consists of three different chords with three different scales – you should play the Dorian minor mode from the second degree of the home key’s scale on the ii- chord, the Mixolydian dominant mode from the fifth degree of the home key’s scale on the V7 chord, and the Ionian major mode from the root of the home key on the I chord.” But the fact is, playing a bunch of modes as ascending scales simply doesn’t sound as idiomatic or compelling as simply playing the home key’s major scale from the root in descending stepwise motion over the entire ii-V-I. See the examples below for an example of what I mean, and take notice of how all of the chord tones for the various chords fall on the beat – which helps clearly communicate the harmony since the ear naturally tends to place more importance on pitches that fall on strong beats rhythmically (all you really need to do to make the chord tones align perfectly is to rest for one 8th beat or use the bebop dominant 7th scale on the V7 chord).

To practice thinking in terms of key centers, try just playing one scale over two or more different chords (I’ll address this in more detail in a later post… stay tuned!).

Here are some examples of lines using just the C-major scale (and the G7 bebop scale) in descending motion over II-V-I’s in the key of C major: 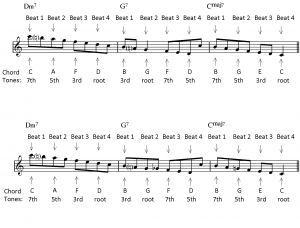 Here are some examples of jazz II-V-I lines that focus on combining descending stepwise motion with ascending leaps and arpeggiated chords: 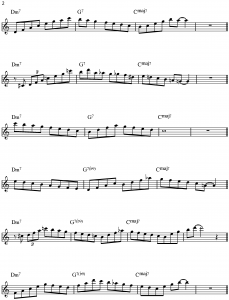 Here’s an example of a transcription of a Bill Evans sideman improvising over the first 5 bars of “Days of Wine and Roses.” Notice how the soloist uses only notes from the F major scale. In fact, the entire phrase uses only pitches from the F-major pentatonic scale. Clearly, the soloist is not thinking on a chord-to-chord or measure-by-measure basis – the scope of thinking (and hearing) is much broader. This jazzer is thinking about key centers, and he found a strategy that allows him to play one simple, beautiful, and elegant melody using only 5 notes – all of which fit over a complex series of seemingly disparate and contrasting chord changes:

I hope you’re now inspired to potentially re-think your approach to learning and teaching jazz improvisation in terms of melody and scale-chord theory. Certainly, in my experience, the approaches I outline above to training new jazzers how to improvise are effective, and I hope you’ll give them a try in your own practicing and teaching.

Facebook
Twitter
Previous articleLJS 55: 4 Important Jazz Chord Progressions You Need to Master
Next articleWhy You Should Learn Jazz By Ear and Not Sheet Music