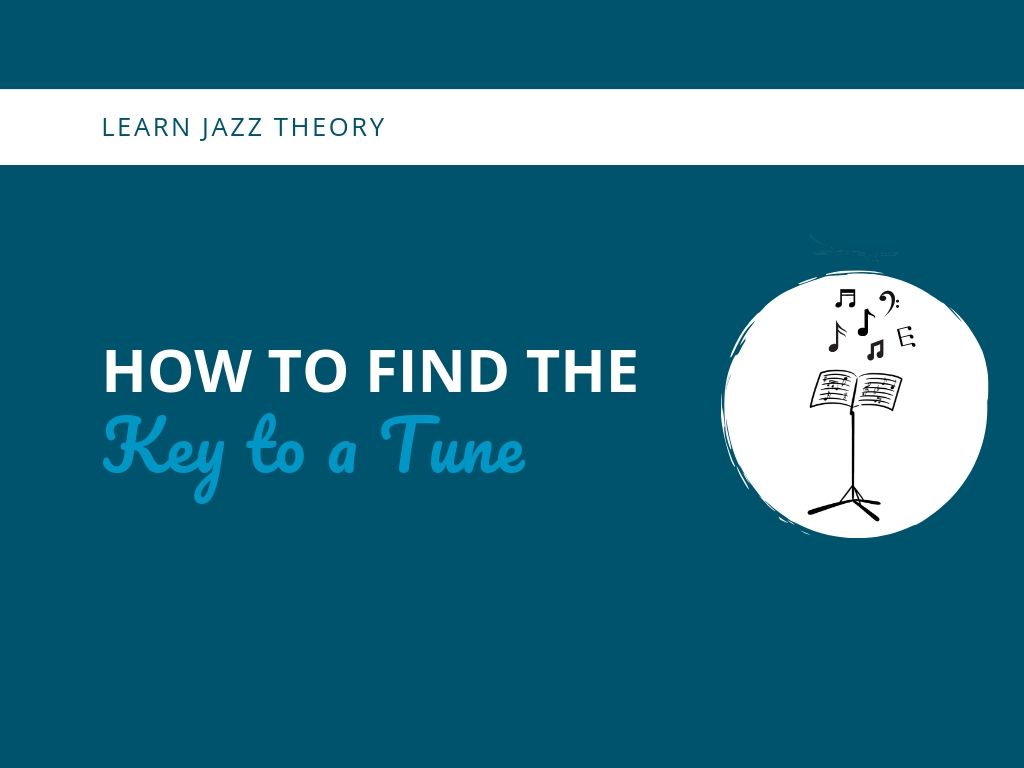 However, finding the key of a song is not always so obvious. Many tunes start on a chord that isn’t the I or minor i chord. Fortunately, there is a more reliable way to find the key of a tune than just looking at the first chord of the song.

This is the Rule for Finding the Key of a Tune that is almost always reliable in jazz music:

The Key of a Tune is Represented by the Chord on Beat One of the 2nd to Last Bar.

This is generally a consistent rule.  However, there are a few tunes that don’t follow this rule.  We will talk about a couple exceptions later, but  MOST of the time jazz standards follow this rule.

The last bar of a tune often has a turnaround to the first chord of the piece.  HOWEVER, the turnaround may or may not lead to the I chord, as demonstrated by the tunes “Just Friends” and “Autumn Leaves,” and so the final turnaround isn’t always reliable in showing us the key.
Let’s use “Oleo” as an example again, taking a look at the last two bars.  The last two measures of the tune are generally played:

“Beautiful Love” starts on the ii chord in a minor key.  In this common tune, the first three chords are a iim7(b5)-V7-i in the minor key:

This progression is  a iimin7(b5)  V7  i, a minor ii-V7-i.  If someone doesn’t have much experience analyzing chord changes, they may not recognize that the tune is in D minor because the first chord isn’t a D minor.   However, the last two bars of the form are a Dmin7.  This firmly establishes the tune in D minor.

Confusing Songs:  When the Turnaround Doesn’t Go to the I or i Chord

Typically the tune is played in G Major or in F Major.   The first chord, the IV chord, is a CMaj7 or a BbMaj7, respectively, depending on whether the song is being played in G or F.

The turnaround at the END of the piece is a ii-V-I that goes to the IV chord, NOT to the one chord!  This is confusing for some people.  Just because the first chord is CMaj7 doesn’t mean the tune is in C Major!  The chord progression to “Just Friends” is, in the Key of G:

Notice that the last bar is:

Let’s take a look at a couple more tunes that are confusing to people.  I have heard some musicians call “Autumn Leaves” in the key of “G” on the bandstand.  This is really problematic, because the tune is actually in a minor key, even though it moves in and out of the relative major key.

The tune is generally played in G minor or E minor.   The relative majors/minors would look like:  Bb major/G minor or G major/E minor.  You can see the ambiguity behind calling Autumn Leaves in “G!”  Do they mean G Major or G minor?  There’s a G in BOTH of the standard keys for that tune!  It’s really in E minor or G minor because the last two bars are:

Our rule tells us that “Autumn Leaves” is in a minor key, though it moves through the relative major quite often.

As in the case of “Just Friends,” the turnaround does NOT accurately predict the key of “Autumn Leaves.”  The turnaround chord, E7 or G7, actually points to the ii chord in the relative major.  The first 8 bars look like:

Notice that we don’t get to the i chord until bar 7!  It’s no wonder that people get confused by this tune.

What key is “All the Things You Are” in?  It’s in the Key of Ab Major, as established by the AbMaj7 in the 2nd to last bar.  However, the tune moves all over the place, through 5 different key centers.  This diagram shows the movements of keys:

Notice that the first 8 bars and the 2nd 8 bars of “All the Things You Are” have the same harmonic movement, but in different keys!  The turnaround at the end is a ii-V to F minor, which is ALSO the vi chord in the key of Ab.

There was once a time, in the first days of Learn Jazz Standards.com in 2010, when I put up a sheet of Roman Numeral changes along with the chords to each tune.  I stopped doing so because it wasn’t a particularly popular feature and because there wasn’t really a great way of doing it when a song moves through a number of key centers.  However, I still highly recommend that you think of chord progressions by assigning Roman numerals to chords rather than just thinking of the roots of the chords.  Roman Numerals help you to see the bigger picture of what is happening in context.  The harmony of most tunes moves, semi-predictably, often in fourths/fifths through major and minor key centers.  Understanding the Roman numerals of the harmony really helps to analyze tunes, and you’ll find chord progressions that are common to many different tunes, even when the keys are not the same.

One more time, the Rule for Finding the Key of a Tune is:

The Key of a Tune is Represented by the Chord on Beat One of the 2nd to Last Bar.

Exceptions to the Rule

Rules are meant to be broken, and there are some tunes that don’t follow this rule, especially if the tune doesn’t have a typical number of bars in the form.  Most tunes move in 4 and 8 bar phrases, and typically have 12, 16, or 32 bars.  However, when the tune doesn’t move in 4 bar phrases, there can be an exception to our rule for finding the key.

For example, “Blue Daniel” is a weird 14-bar tune by Frank Rosolino that ends with a 6 bar phrase.  The last two bars are a turnaround to the I chord at the TOP of the form.  The tune would actually follow the rule if it ended with a typical 8 bar phrase instead of a 6 bar phrase!

Another interesting tune that doesn’t follow the rule is “A Child Is Born” by Thad Jones.  The tune is 30 bars, 2 bars short of the typical 32.  Again, last two bars of the form turn around to the I chord at the top, which means that the rule doesn’t work with that particular tune due to the odd number of bars. However, the rule would have worked if the tune was just 2 bars longer!

For the most part, however, the chord on the downbeat of the 2nd to last measure will consistently show you the key of almost any tune.

Camden Hughes is a jazz pianist, music educator, and the Founder of LearnJazzStandards.com.  He recently released his first album, “IntroSpective,” in August of 2015. “IntroSpective” is funky and accessible modern jazz collaboration with saxophonist Thomas Hutchings.  The album is available on iTunes.  For more information about this author, visit:

How to Improvise Using “Constant Structures”