Who Hijacked The Jazz Economy? 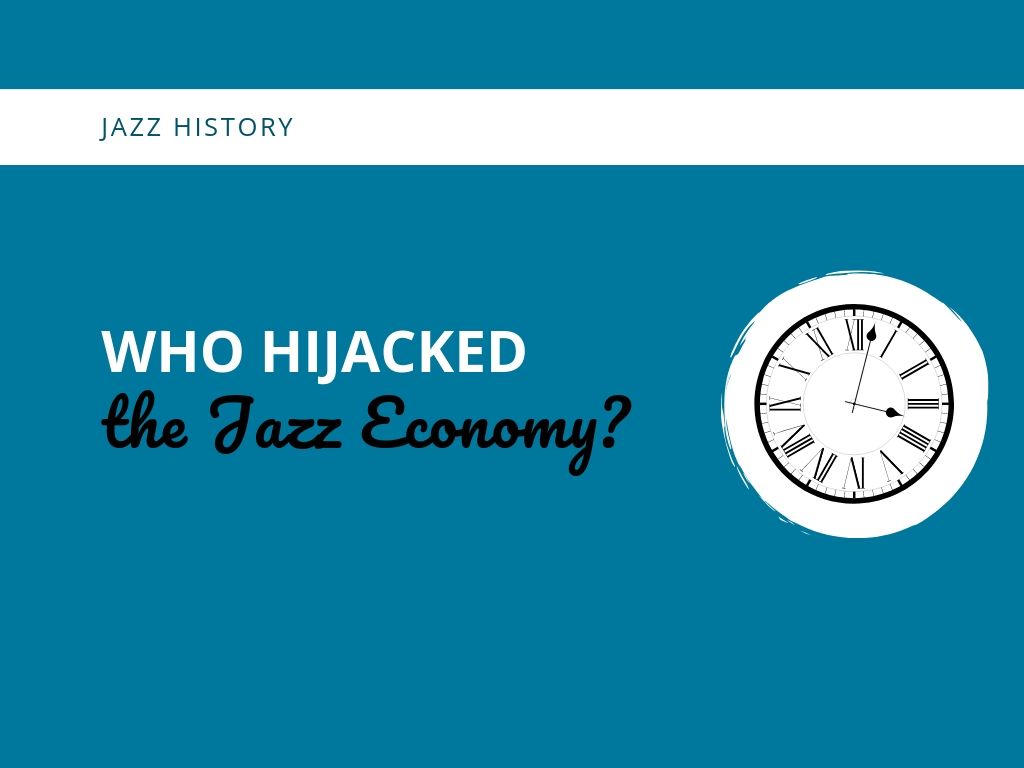 Sixty or eighty years ago, the jazz economy was healthy.  Things were different.  There was a healthy club scene in many metropolitan areas.  Jazz was in vogue.  It was relatively easy for a good musician to gig 5 nights a week.  There was an entire economy based around the performance of jazz music.  People went to clubs to hear the music.  Jazz musicians made lots of records, and these records made money.  People were buying the records.

Here were are now, in 2015.  The club scene has all but disappeared in many cities, and even in larger cities like New York, the scene isn’t quite what it used to be.  We can probably all agree that it is more difficult to make a living as a jazz musician than it was when the scene was more vibrant.  What happened?

Who Hijacked the Jazz Economy?

Here are some scapegoats which are often touted as reasons for why jazz doesn’t command the audiences (or dollars) of yesteryear.  This article will attempt to deal with some of the musical and cultural forces at work that have gotten us to where we are today.  Knowing what has happened may help us to combat current trends!  I don’t intend this article to be dark.  With guarded optimism, let’s consider the cultural forces that have gotten us here, and then consider solutions.  With jazz record sales at a less-than-commanding 2% of the overall market (which is also tanking), jazz aficionados are quick to point fingers at:

Ike Turner and Jackie Brenston’s recording of “Rocket 88” in 1951 is widely considered to be the first rock ‘n’ roll recording.

Artists such as Elvis Presley, Chuck Berry, Little Richard, Buddy Holly, and many others followed with more recordings.  Interestingly, you can hear a heavy jazz influence in this old rock ‘n’ roll, with saxophones, jazz instrumentation, and even a swing shuffle beat.

It turns out that kids really liked to dance to this stuff.  Rock ‘n’ roll was dance music early on, and in certain respects rock ‘n’ roll took over for the jazz music that had been the popular dance music of the 20s, 30s, and 40s.  Despite the obvious jazz influences, rock ‘n’ roll was headed in a different direction, and by the time it got to the Beatles and Eric Clapton, the new rock music showed little resemblance to jazz.  By the mid-50s, kids who would have been dancing to swing a generation earlier were now flocking to rock ‘n’ roll.

Despite Barry Harris’ reflections to the contrary,  bebop isn’t great dance music.  Bird, Diz, Thelonious, and the rest of the beboppers created a new art music.  Bebop is an amazing art form.  However, people going out to dance weren’t into dancing to bebop like they were to swing.

That’s all well and good, except that dancing was essentially a cornerstone of the jazz economy.  Swing made people want to get up and move.  Swing catered to your average working class “Joe,” who just had a hard week of work and wanted to take his old lady out dancing on a Friday night.  Bebop and future iterations of modern jazz just didn’t cater to dancers in the same way as earlier styles of jazz.  Bop was music for musicians, developed at places like Minton’s Playhouse in Harlem at after hours jam sessions.

Louis Armstrong had some strong, harsh words for the new style of jazz and it’s practitioners:

“[Bebop musicians] want to carve everyone else because they’re full of malice, and all they want to do is show you up, and any old way will do as long as it’s different from the way you played it before. So you get all them weird chords which don’t mean nothing, and first people get curious about it just because it’s new, but soon they get tired of it because it’s really no good and you got no melody to remember and no beat to dance to. So they’re all poor again and nobody is working, and that’s what that modern malice done for you.”
—Louis Armstrong, 1948

Louis Armstrong’s attitude toward bebop is well-documented.  It even made its way into his music!  This entire song is Satchmo poking fun at the bebop musicians:

Even if Satchmo had a sometimes-adversarial relationship to bebop, he still worked with bebop musicians from time to time.  I find this clip to be a fascinating (and swinging!) juxtaposition of Louis’  dixieland style to Dizzy’s virtuosic bebop.

Ever seen someone try to dance to bebop?  By the way, these next two clips were not easy to find. Almost every clip I could find of people dancing to jazz had more in common musically with swing than with bebop.


The videos speak for themselves. You practically had to be a professional dancer to dance to bebop! It’s clear why the vast majority of dancers prefer swing. Swing is simply easier to dance to because it caters to dancers! Swing is more downbeat-oriented and less syncopated than bebop.  The songs are generally shorter and more scripted.

Dizzy actually wanted dancers to dance to bebop, as evidenced by his cameo in the first video, but bop just didn’t cater to dancers like the big bands from the swing era.

By the late-40s, bop was a rising force within the jazz world, with swing on the decline.  Bebop instigated a nasty divorce between jazz and dancers.  Unfortunately, the popularity of jazz has never regained the widespread popularity it enjoyed during the swing era.  The transition of jazz from dance music to art music created some great music, but was ultimately the nail in the coffin for jazz as popular music.  I say this as a jazz musician.  I wish it weren’t so, but it’s just the reality.

So, who else could have Hijacked the Jazz Economy?

It used to be that aspiring musicians could go out to the clubs to hear the music and learn from older cats.  While a “jazz scene” is still a reality in some cities, the younger musicians now who want to learn jazz pretty much have one viable option; to learn it in schools.  They may only have 1 or 2 teachers instead of an entire scene to teach them.

Some cats like to blame the schools for cloistering the younger generations up in schools, removed from the economic concerns of playing clubs and pleasing an audience.  Under these conditions, the music sometimes has a tendency to become more academic, esoteric, and removed from general audiences.

I don’t have any official statistics to back up this claim, but I’ve heard cats who have been around complain that forty or fifty years ago, perhaps 90% of the jazz economy was performance oriented, whereas now Jazz education is now 90% of the total pie.  The entire jazz economy has been flipped on it’s head!  If you want to be a professional jazz musician today, you pretty much have to teach.  For some, the schools are to blame for the decline of the “scene.”

It used to be that all the generations would go out to clubs.  Then the schools hijacked the youth.  With younger cats not frequenting the clubs, those dollars went away.  Eventually, the schools helped to kill the club scene.  Thats’ what some people think.

For someone in my generation, taught in the schools before ever coming to the club scene, it’s harder for me to blame the schools themselves for what seems to be a larger, cultural trend, so I tend to have a harder time supporting this view completely, but it still may be at play as one of many factors.

The Great American Songbook is an amazing cultural legacy.  Jazz musicians for decades have embraced it as an enormously powerful force in the canon of jazz repertoire.  So what’s the big deal?  This is somewhat problematic for me to admit, as the founder of a jazz education website dedicated to learning standards, but this cultural shift is nonetheless a reality that we must confront.  The problem is that time is moving on, and younger audiences simply do not know these great songs.  Even Sonny Rollins plays standards less frequently.  Jazz musicians used to play lots of standards, which were essentially “cover” songs that audiences actually knew!  Now audiences don’t know these songs anymore like they used to.  They don’t respond the same way.

Let’s just get some new standards that people know…no big deal, right?  The other issue is that pop culture is providing us with mediocre songs devoid of harmonic and melodic substance.  Culturally we just aren’t getting a lot of great material from songwriters anymore.  There are some exceptions-Brad Mehldau, for instance, has covered Nirvana and Radiohead.


While the odd-metered treatment of a Michael Jackson tune and a solo piano rendition of a Radiohead cover are not exactly great for dancers, these are still some great covers by some fantastic jazz artists!  There are good songs out there to cover.

Still, pop culture isn’t adding much to the canon of jazz standards nowadays because pop music is just so terrible now.  The harmonic and melodic sophistication just isn’t there like it used to be when cats like Jerome Kern and George Gershwin were contributing to the Great American Songbook.   Many jazz artists have turned to esoteric originals, but in many cases those don’t really resonate either.  Many audiences want to hear songs that they know.

The iPod and iPhone are perhaps the best symbols for a cultural shift that has occurred over the past 30 years.  People are just less inclined to go out to hear live music as frequently anymore.  It’s hard to pin that on the iPod or the iPhone alone, but the fact is that people can listen to anything they want now, at any time.  Virtually any song by any artist is available to people at the touch of a screen now.  With Apple Music and Spotify, people don’t even need to buy the song to access it anymore.  Music sales in every genre are tanking, with streaming as the new way of listening to music.  Artists get pennies (or less) per stream, but at least that’s better than pirating, in which case the the artist gets nothing.

Live music will never go away, but a century ago one had to actually leave the house to hear music if they wanted to hear it at all.  People can get their music needs met now without having to go pay for live music.  They don’t even have to get up out of their seat to turn on a CD player anymore; everything is available on our phones!

So, who Hijacked the Jazz Economy?  This is a nuanced question the requires a nuanced answer.  As I’ve said from the beginning, I don’t want this to be a dark article, but I didn’t want to pretend there isn’t a problem.  We don’t want to stick our heads in the sand and pretend that these issues don’t exist.

By raising the question as to what happened to the jazz economy, hopefully we can start coming up with better answers of how we can combat the cultural trends and win back new audiences.  Jazz is over a hundred years old now.  I love this music and I want to see more people continue to enjoy this incredible art form about which we in this community are so passionate: Jazz.

Do some outside-the-box thinking.  What can you do to expand the cultural reach of jazz?