How to Use Voice Leading In Your Jazz Solos 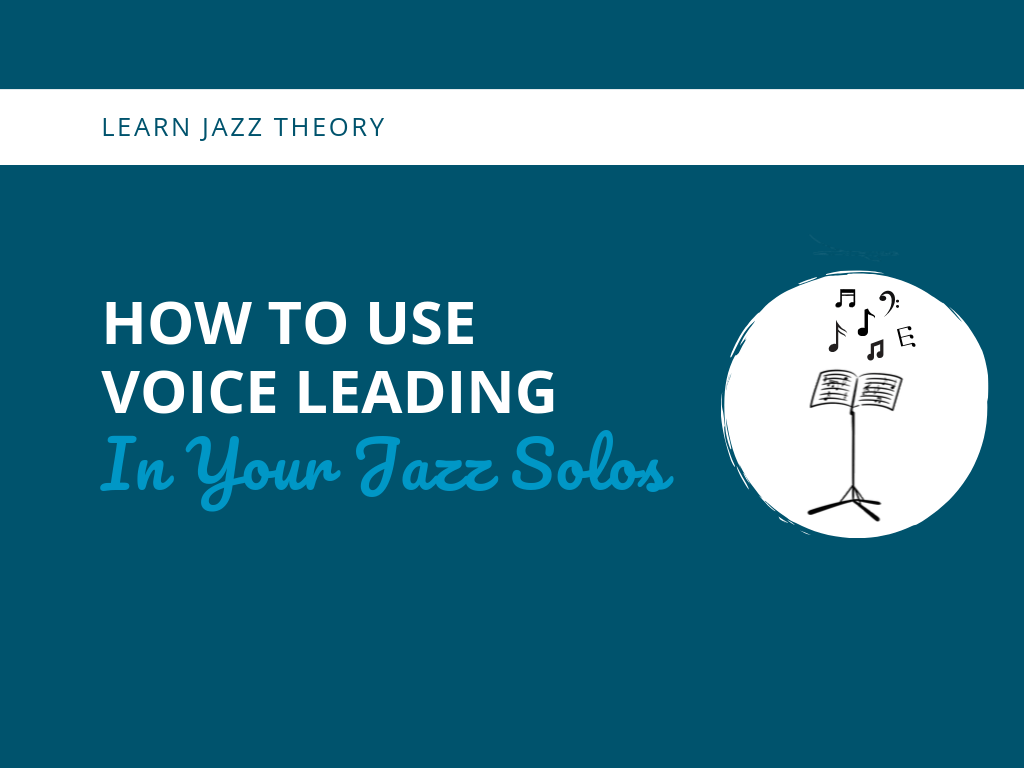 First, let’s review the terms as I understand and use them. Much of this will be review for many jazz musicians, but it’s always a good thing to build from the ground up and reinforce the concepts we’re already familiar with.

Voice leading refers to the way that certain notes or “voices” within chords move and change (“lead”) in a chord progression. Many chords in common harmonic progressions have both common tones (pitches that are shared by two different chords) as well as differing pitches. The interplay of common tones and notes that change from chord to chord creates the perceived sense of harmonic flow, momentum, and/or forward motion in the music.

Voice leading therefore also refers to that sense of forward harmonic propulsion – the feeling that the music is “going somewhere” and that it’s being driven in part by the moving and changing harmonies. Pitches that move in a stepwise fashion from one chord to the next in a given progression can be said to voice-lead in a clear way. If you create a melody based on a series of chord tones that move stepwise through a harmonic progression, you have a guide-tone line.

Guide-tones, therefore, are important pitches in the chords that strongly identify and outline the changing harmonies of a tune. Guide-tones can be roots and 5ths, 3rds and 7ths, or notes chosen from the extensions of the chords, such as 9ths, 11ths, and 13ths.

There are multiple options for selecting effective guide-tones for any given song. To use guide-tones, pick out the notes that most clearly outline the changes within harmony for your ears, practice them by themselves as whole notes, half notes, and/or quarter notes, then use them as a “skeleton” or “framework” to start building more complex melodies around.

Since the roots and 5ths are most likely covered by the bassist, 3rds and 7ths are usually the strongest starting places to build a solid guide-tone line. 3rds and 7ths almost always play a very important role in defining the nature and character of the chord (in other words the “chord quality”).

For all three chords, the root and fifth are the same (C and G). But each of the three chords has a different combination of major/minor thirds and sevenths that help define the quality of the chord. Furthermore, anytime there’s the harmonic motion V-I (with a V7 and I major) in (a chord progression where a chord resolves up a perfect 4th or down a perfect 5th), the 3rd of the first chord will be a common tone shared by both chords (it will become the 7th of the second chord), and the 7th of the first chord will resolve down stepwise into the 3rd of the second chord.

If you have a chord progression moving up a 4th or down a 5th with different combinations of chord qualities (for example if both chords are dominant), the 3rds and 7ths will most often voice lead into one another by stepwise motion, again providing potentially effective guide-tone melodies. This is useful to remember because the harmonic movement of chords in ascending 4ths of descending 5ths is very common in jazz harmony. So many foundation guide-tone lines include 3rds and 7ths.

To illustrate how I’m thinking about the concepts of voice leading and guide-tones, let’s first look at a basic diatonic II-V-I progression using basic upper structures and one with an altered V7. Then let’s look at a few other examples with different types of common jazz chord progressions.

In the example piano voicings below, the “voices” of the chord are the different pitches in each chord (for example, for the D-9, the voices from top to bottom are: D, F, A, C, and E).

The common tones are indicated, and you can see the inner voices that change from one chord to the next highlighted in different colors. Note how the voices that change from one chord to next create a clear stepwise melody. These moving voices create voice leading, and they can be used to build a guide-tone line. Of course, there are many options for voicing out chords and therefore many options for guide-tone melodies, so these are just a few examples to get you started as you think about voice leading using guide-tones.

Here are a few sample guide-tone lines extracted so we can see them isolated from a voicing:

Here’s the crucial step– how do we take just a few notes played in half- and whole-notes and turn them into jazz melodies?

The next step is to fill out the “frame” provided by the guide-tones with notes from the appropriate scales suggested by the chords. Here we can bring all of our rhythmic creativity to bear and incorporate other techniques such as surrounding/approach tones.

Use the guide tones as starting points for making up a melody, and try to place them at key structural points in your phrases. The best places to put guide-tones in your lines are the beginnings or phrases, at transition points from one chord to the next, and on strong beats.

Take your guide-tone outline and add in notes from the mode/scale associated with the chord. Create some rhythms to transform a simple guide-tone line into a full-blown melodic statement.

Here are some examples of melodies based on the guide-tone lines above (I’ve pointed out a few features in the first few examples – keep an eye out for similar aspects in the other examples):

So, as you learn tunes, look for key pitches in the songs’ chord progressions that help capture the character of the harmony. Try to find a stepwise melody that connects important chord tones (such as 3rds and 7ths)  from one chord to the next.