How to Improvise Over “Giant Steps”

Giant Steps looms large in the jazz repertoire as one of the most challenging tunes on which jazz musicians cut their musical teeth.

The iconic title track from Giant Steps helped cement saxophonist John Coltrane’s burgeoning reputation as a musical and creative force to be reckoned with when it was released in 1959. Now recognized as a colossal figure in jazz history, Coltrane struck out on a bold new path with Giant Steps by exploring highly sophisticated and virtually unprecedented (in jazz, at least) harmonic vocabulary in his compositions and improvisations.

With Giant Steps, Coltrane began exploiting his prodigious technique in an attempt to communicate expressive, coherent melodies while improvising over a complex, endlessly cycling harmonic structure that rapidly moved through disparate key centers.

According to the traditional interpretation, the “giant steps” that lend the song its name refer to large leaps in tonal centers. Coltrane changes and the “Giant Steps cycle,” which is based on key centers a major third apart, have now become codified and canonized in jazz theory, and both harmonic blueprints have been frequently appropriated, recycled, re-contextualized, and recast by jazz composers and improvisers past and present.

Listeners are stimulated by the power these harmonic devices possess to evoke a feeling of perpetual forward momentum – a relentlessly driving emotional energy that is sometimes experienced as the impression of a propulsive journey across a kaleidoscopically shifting landscape.

So how can we tackle this behemoth of a tune? Coltrane himself approached it by playing a lot of notes in specific patterns. Coltrane’s style of playing in the late 1950s was dominated by a musical texture jazz critic Ira Gitler famously referred to in 1958 as “sheets of sound” – which was a metaphor for the saxophonist’s virtuosic rapid cascades of patternistic running eight-note lines.

So let’s look at how to follow Coltrane’s lead and have a few strategies for getting through “Coltrane changes.” The examples below focus primarily on the first 8 bars of the tune since those are the trickiest for most people. Here’s a link to the chord changes sheet in concert pitch for you to reference.

Coltrane uses pattern ideas all over on his solo over Giant Steps.

The big three to focus on are: triads, 7th chords, and scale fragment permutations. Here are some sample exercises to help you navigate the chord progression: 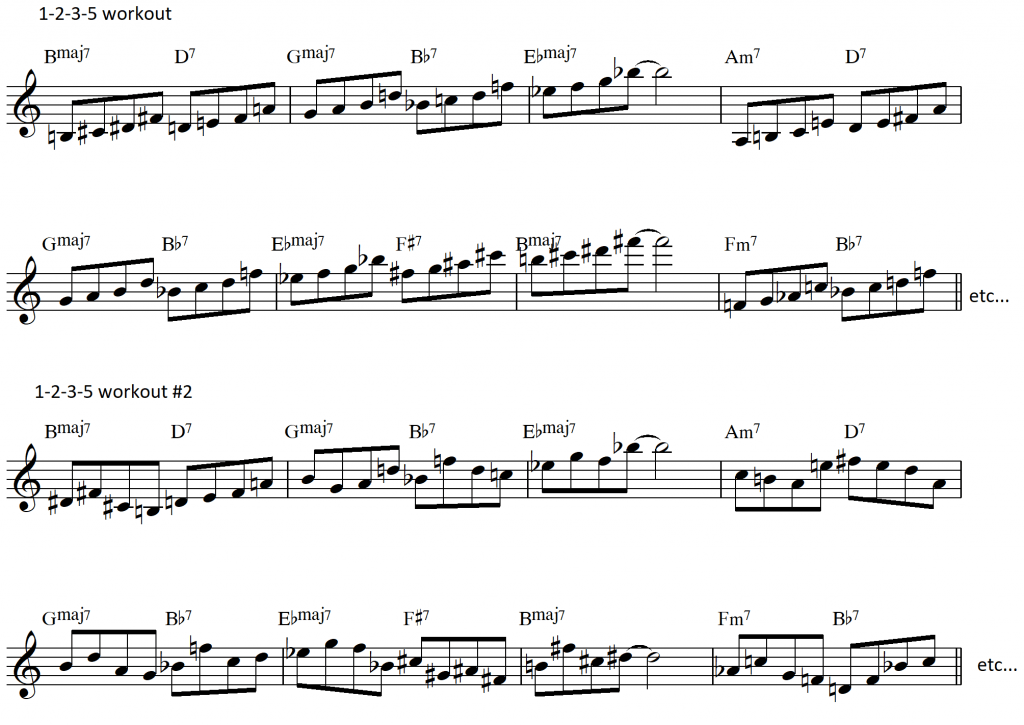 2. Look for common tones and slow down the pace of melodic material

When there are a ton of complex chord changes flying by quickly, a lot of jazz musicians’ instincts are to try to outline all of the changes all of the time.

Although you should be able to outline all of the changes, you don’t have to do this all the time. It’s actually more musically effective and interesting if you contrast passages full of 8th-note lines where you outline the chords with passages where you “skate” over the changes and find slower moving melodies that connect the chords by hitting key common tones.

Use the melody of the tune itself as a model, and check out this example:

Giant Steps is full of melodic and harmonic sequences. As a matter of fact, the whole melody is just two melodic ideas that are sequenced (transposed and played at a different level). So this is a great tune to take advantage of the opportunity to start using sequences to create a sense of melodic/motivic/thematic unity amid all the rapidly changes chords and key centers. Here are some examples: