2 Jazz Practicing Tips That Will 2X Your Results 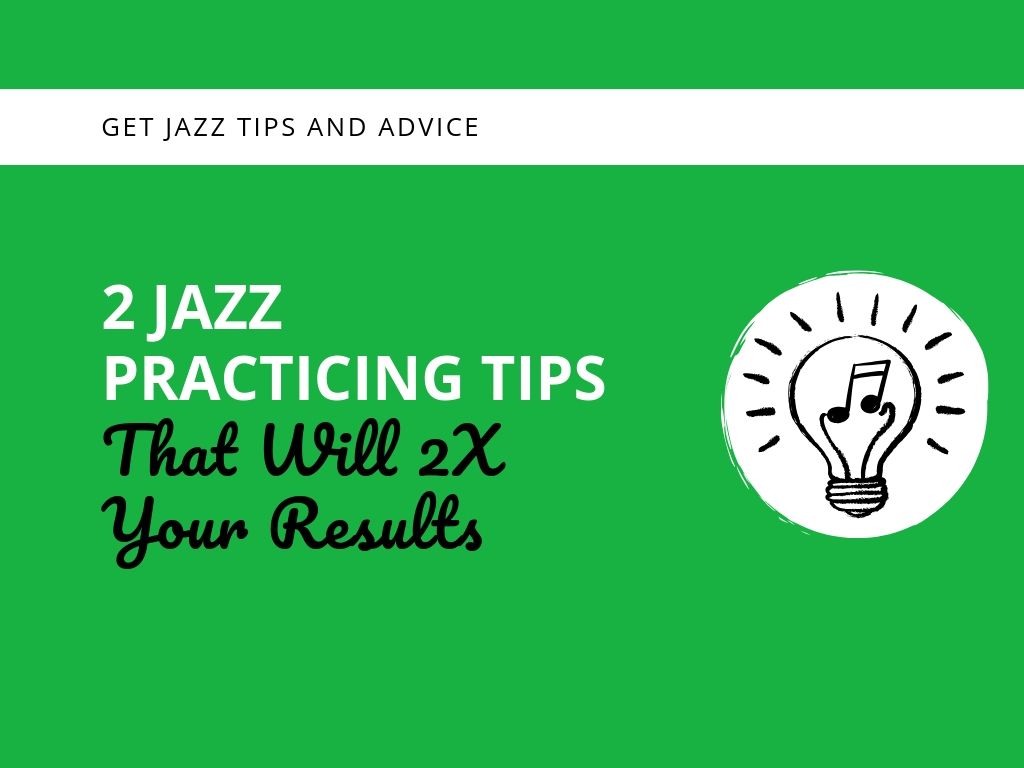 Here’s the deal: jazz musicians spend a lot of time practicing but end up wasting a lot of it. In fact, I’d like to go out on a limb and say that 50% of practice time is often wasted. I’ve come to this conclusion from observing my students, my colleagues, and of course being guilty of it myself from time to time.

There’s a lot of reasons for this. It could be that they haven’t set goals for their playing, and therefore they enter the practice room with no direction. It could also be that they simply aren’t practicing the right things to really help them improve as a jazz musician. These two elements are crucial.

However, even if you have set goals for yourself and you are practicing things that are beneficial, that doesn’t mean you are safe from wasting practice time. You can still be on the right track but not practicing in such a way that will help you achieve your maximum potential.

This is incredibly important to talk about, because when it comes down to it, practicing is everything. There are no shortcuts to becoming a better jazz musician. Becoming a better jazz musician is not cheap and easy. It takes real time and real work. So wouldn’t we want to be getting the very most we can out of our practice sessions? I know I want to. I just simply don’t have the time to waste on bad practicing.

So here are some huge tips that you might not hear as often. They may be plain words that you are reading on your computer or phone; just another article you’ll quickly read through and then dispose of, but if put into action, they can be so much more than that for your jazz playing.

I’m sure you’ve heard the saying “Less is more”. I didn’t believe in those words for a long time. In fact, in the consumer based society that I live and am conditioned in, it’s still hard for me to believe in this. But is the less is more approach the real deal? Absolutely.

It’s called information overload. You practice too much stuff, and then move on from it too quickly. If you learn 3 new jazz standards in one week, it may feel as if you have accomplished something great, but do you really know those songs well? You may have learned a new lick or musical idea from a recording you like, but then move on to the next one before truly internalizing it. Is learning more licks in a short period of time going to result in better jazz playing? Probably not.

Too often we learn something and then move on to the next thing without giving it the time and energy it deserves. If you really want to become a better jazz musician, get rid of the consumer mentality and start focusing on repetition.

Repetition is super important. How many songs have you learned only to forget them in the long run? I can’t count the ones I’ve forgotten on both of my hands. Think about all of the time I’ve wasted. Perhaps if I would have truly worked on half of the songs that I have “learned” over the course of my jazz education, I would know even more songs really well.

Some people have better retention levels than others, but that doesn’t exclude them from this demand for repetition. You may have heard about the 10,000 hour rule (it takes approximately 10,000 hours of practice to truly master a craft) and there is a lot of truth in that. But of course the question is 10,000 hours of what kind of practice? Wasted practice? Of course not. Malcom Gladwell in his book Outliers, talks about the stories of Bill Gates and the Beatles, among others. What was the common thread in their 10,000 hours? Repetition. They repeated the same stuff over and over again. When something new was learned it was repeated until it became second nature, and then they never stopped doing it.

Next time you are in the practice room and are ready to learn some new information, ask yourself: Do I know the last thing I learned really well? Am I learning something new because I’m ready for it, or am I just doing it because I think something new will make me better?

Take it from chef and culinary icon Jacques Pepin:

“If you are a jeweler, or a surgeon or a cook, you have to know the trade in your hand. You have to learn the process. You learn it through endless repetition until it belongs to you.”

2. Stop practicing so much and just be consistent.

Practicing for long hours isn’t bad, and I wouldn’t discourage it. The only question to be asked is: am I wasting time? If you can practice for 5 hours and truly be getting something great out of it the entire time, great! More power to you. But if you are like most people, it’s hard to stay focused for that long.

Another problem is sometimes musicians treat practicing like cramming for a test. They ignore their instrument for days and then suddenly feel as if practicing for a long time will make up for it. Not really. I know this because I’ve been guilty of it on multiple occasions.

If you really want to achieve maximum results for your jazz practicing, you need to be consistent. No one likes to play with a musician who’s constantly rushing and then dragging, and in the same way, your instrument doesn’t like it when you constantly neglect and spoil it. Don’t send your instrument mixed messages, just try to consistently spend time with it.

This doesn’t mean you have to practice everyday. For most people this is impossible. It just means you need to keep a rhythm with your practicing. If you are able to do this, your improvement will remain consistent as well. Consistency plays right into the hand of repetition. They work together like a power team. Put them together and they can be a very powerful force.

“One things guys have to remember is consistency…You can’t make up for three years of eating poorly in just one workout.”

Facebook
Twitter
Previous articleHow to Harmonize a Major Scale with 7th Chords
Next articleLJS 30: 5 Jazz Solos You Should Learn and Why