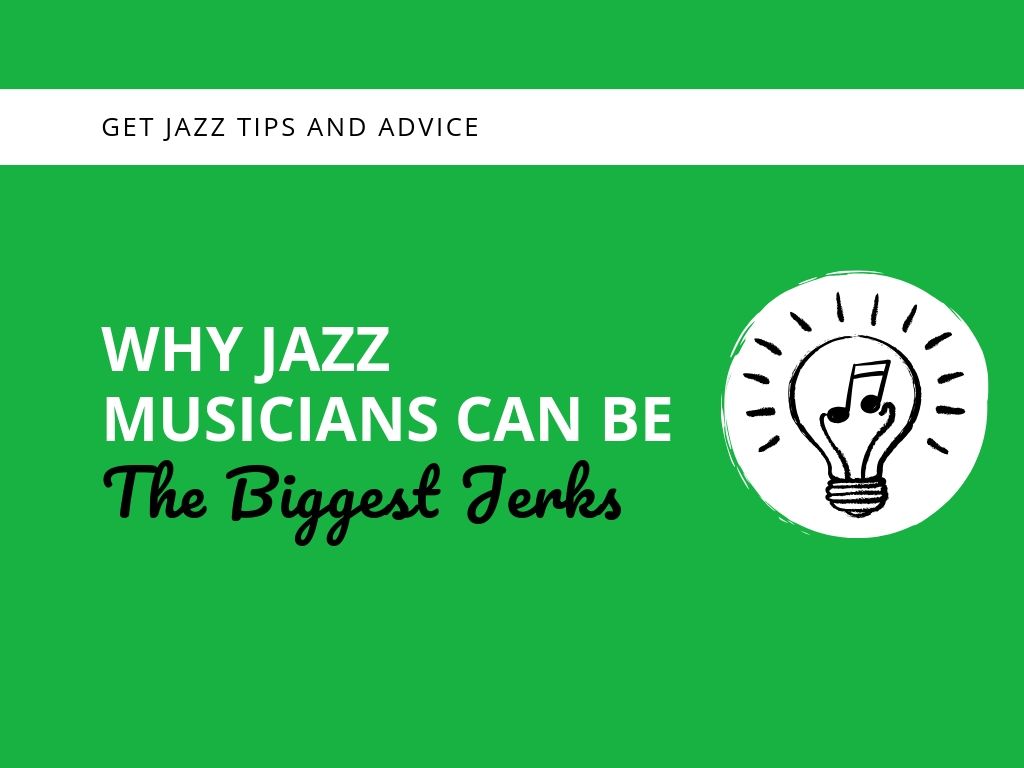 I just can’t take it any longer. I’ve held it in for a while, but now I just have to come out and say it:

Jazz musicians have been some of the meanest, cruelest, whining, egotistical people I’ve ever met!

I have my reasons why. It’s not that I’m an outsider looking in. No, in fact I’m a jazz musician myself, and because I’m on the inside I get to see the worst of it. I’ve been around this unruly cast of characters for so long now that I’ve finally had enough. I’m finally going to say something about it.

Now please don’t get me wrong. Some jazz musicians have also been the most wonderful, caring, nurturing, loving and humble people I have ever met. I’m not out to attack jazz musicians, remember I’m one of them! But because I am a part of the jazz community, I think it’s partly my responsibility to call out some of the bad behavior I see going on.

My intent is not to rag on my fellow jazz musicians, but to kindly remind some of us that we’ve lost our way. No one’s perfect, and that’s okay. Heck, some of the things I’m about to rant and rave about I’ve been guilty of before!

1. Stop acting like jazz is a superior genre of music.

I’ve seen it in attitudes and I’ve heard it in words. Stop looking down on other forms of music as if they are not just as important as jazz. Jazz is not a ‘better’ form of music than others.

Indeed jazz is a music that requires a certain level of virtuosity. It’s harmonically rich, demands technical ability, and often requires an understanding of music theory. There is no arguing that learning jazz can develop a high level of musical knowledge. It’s these facts that I feel manifests the superiority attitudes and beliefs of some jazz musicians.

But here’s a news flash: more technically difficult, and harmonically complex does not= better.

There are only two kinds of music: good music and bad music. Period.

I mostly perform as a jazz musician, and I tell you what, every time I try to play a pop, folk, or rock gig, I get a reality check: you need some serious talent and practice to play those styles well! Some of the best music in the world is not jazz. All of these musicians have put enormous amounts of effort into their style or genre, the same as jazz musicians have put into theirs. It’s okay if jazz is your favorite style of music. It happens to be mine. But if you think that jazz is a superior music you are dead wrong.

Listen to lots of music that is not jazz. If you are not, you are missing out on a lot of good music. Not only that, you are missing out on a lot of great inspiration. I’ve written a number of tunes that were inspired by singer song writers and rock musicians, and adapted them to my own style. Work on playing different styles of music. Every style has something different to teach you about music, and I guarantee you will learn a lot!

Camden describes vibing fairly well in his “Why Vibing is Bad For Jazz” article:

Now listen everybody, the jazz community is fairly small. What I don’t understand about vibing is why would you want to ostracize someone from our community, or push them away before they can even get into the door? Don’t we want to be inviting more people in?

Nothing ruins a great gig or jam session than some egotistical jazz musician vibing another player. It just kills all of the good energy!

It’s not that I don’t see where the vibing jazz musicians are coming from. Sure, they’ve put in a lot of effort into their craft, paid their dues, probably got vibed by some other big shot musician, and spent countless hours learning tunes. Then all of a sudden some amateur waltzes in to their jam session not knowing many tunes and struggling to blow over changes. The nerve!

But try this for an alternative: encourage the budding musician to practice by making them feel welcome. Instead of putting them down and being intimidating, nicely show them some things you’ve been working on that could help them.  If you are extra generous, maybe consider offering to jam with them one on one some time. Offer constructive criticism instead of an attitude and oppressive words. Remember that everyone has to start somewhere, and so did you. If someone makes a mistake, loses the form, screws up the changes, relax. I bet you’ve done it before too.

The bottom line is stop vibing! It brings out the worst in everybody, and we don’t need it in our jazz communities.

3. Stop complaining about the “state of jazz”.

I’ve heard it all too often: “Jazz isn’t what it used to be”, “there used to be more work for jazz musicians”, “there’s no more gigs anymore”, “no one wants to listen to my music”, “jazz was”, “jazz isn’t”, blah, blah, blah.

Honestly, we need to stop complaining all of the time. It’s a drag when I constantly hear jazz musicians act like their own style of music is dying. Because it isn’t! That’s just some made up doom and gloom talk. Jazz music hasn’t been popular music since the Swing Era in the 1930’s. In other words, not too much has changed in the last 70 or so years.

Are you trying to make a living from jazz music?

No. Then what are you worried about? Enjoy playing it, enjoy listening to it, and keep on supporting those that do. Go to shows, take lessons, buy records, and just keep having fun! Jazz isn’t going anywhere, and you aren’t paying your rent with it. Being a hobbyist, or a casual jazz fan is a lot of fun! You play/listen to jazz because you love it. You are probably the least likely to complain, but in case you are, don’t because there is no reason to.

Yes. Well, hopefully you knew what you were getting into to, and if you did, you can’t complain too much.

I’ve heard all of the complaints: but no one buys jazz records anymore! As opposed to when? Were small time artists ever making that much money off of record sales even before the internet? I don’t think so. Taylor Swift makes good money from record sales because she’s a pop artist who’s backed by a major record label. Pat Metheny and George Benson probably make some decent money because they are A. famous and B. ventured outside the jazz realm. I’d argue that nothing has changed that much for the average working jazz musician.

Well there aren’t enough gigs and they don’t pay enough! First of all, don’t think that’s how you can make all of your living anyway. If you are in this business you better be doing some other things like teaching, or even playing gigs that aren’t necessarily jazz. If you want to be any kind of professional musician in this modern day and age, you better be prepared to be creative and even become an entrepreneur. People don’t become musicians because they thought it would be easy or make them rich. If you did for these reasons, I’m sorry that someone misguided you.

I studied with a great teacher at the end of high school. One day I told him I wanted to be a professional jazz musician. I wanted to go to college for it and it was a big decision. He looked at me and said “Before you commit to that, ask yourself, is there anything else I can do or can see myself doing? Because if there is something else, you should do that.  If there is absolutely nothing else, and your heart is set on it, follow me.” I have to say my teacher gave me a fair warning!

I get why the average professional musician complains: because it’s hard. I’m right here with you. You can complain all you want, but that’s not going to change anything. Instead, figure it out and do something about it.

In summary: if you are a jazz musician who is egotistical, vibey, stuck-up, and whiny: Knock it off! We’ll all be glad if you do.

The (Whole) Truth About Jazz Vocabulary