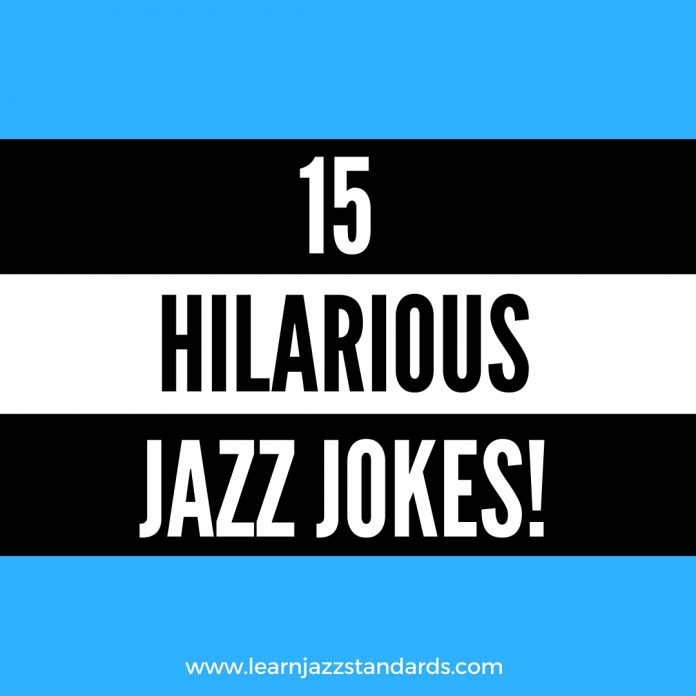 I’ve heard a lot of great jazz jokes, both from musicians I know and those floating around the internet. In an effort to spread the laughs and pass on the humor. Here are some of my favorite jazz jokes I have come across! Be sure to share yours in the comments below.

What’s the difference between a jazz musician and an extra large pizza? The pizza can feed a family of four.

What do you call a jazz musician without a girlfriend/boyfriend? Homeless.

A jazz musician goes to the doctor to hear the results of a physical check up.
Doctor: I’m afraid I’ve got some bad news. You only have three weeks to live.
Musician: On what?

Kenny G has made a new album featuring his own adaptations of Thelonious Monk compositions. The album includes some truly unforgettable tracks such as ‘Round Noon’ and ‘Straight No Changes’.

Two musicians and a drummer are at a bar…

SINGER: “That’s crazy! I couldn’t possibly do that!”

A couple goes to see a marriage counselor. They say their marriage is on the rocks because they never speak to each other. The counselor tries to get them to talk, but they just sit there with their arms folded and their mouths closed. So he pulls out his upright bass and starts taking a solo. Instantly, the couple turns to each other and starts conversing for the first time in months. Shocked by this, the couple asks the counselor: “How did you know that would work?”

“Simple,” he says, “Everyone always talks during the bass solo.”

What’s the difference between a dead squirrel on the side of the road and a dead trombone player? The squirrel was on his way to a gig.

How do you make a jazz guitarist play quieter? Put a chart in front of him.

How do you get a jazz musician off your front porch? Pay for the pizza.

How do you know who won the trumpet solo battle? Whichever one played the highest and loudest.

What would you have to do to make a jazz musician feel bad about their playing? Absolutely nothing.

Have any jazz jokes? Leave them in the comment section below.

Facebook
Twitter
Previous articleLJS 20: How Studying Jazz Can Make You a Better Musician
Next articleLJS 21: 4 Steps to Finding More Time to Practice

“Notes From the Lobby” by Bill Anschell

“How to Be a Jazz Critic” by Bill Anschell

Searching for Glory at the Cookin’ Cadenza by Bill Anschell