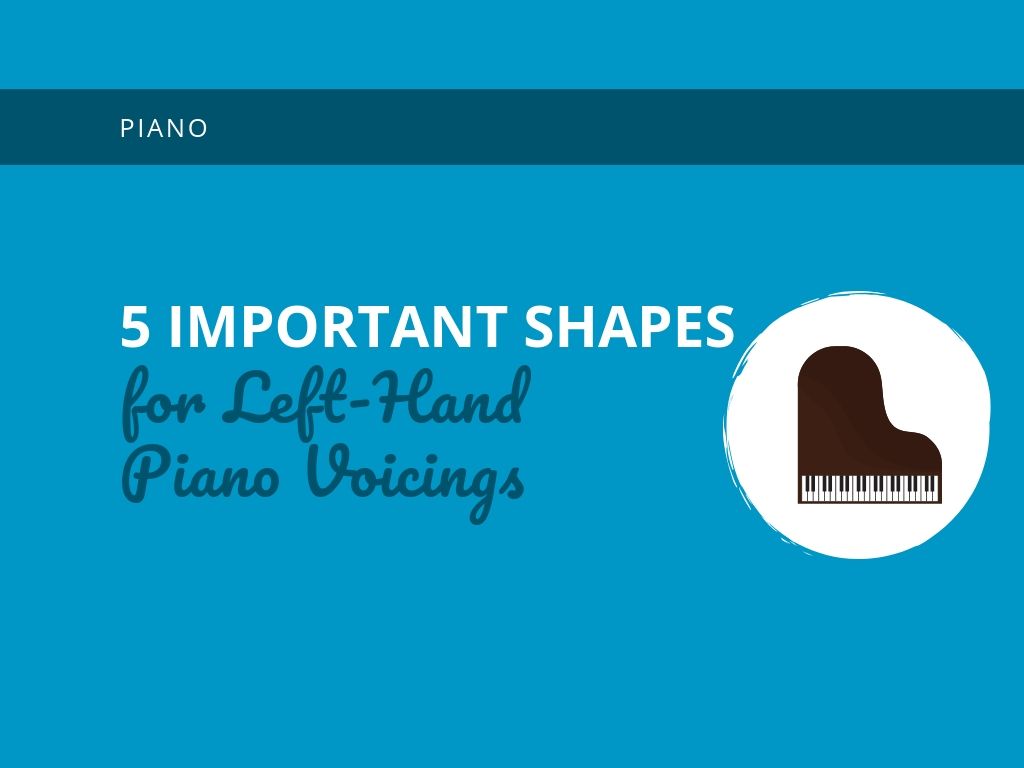 Sometimes left-hand voicings can seem like a tricky concept for beginning jazz piano students because they have to know a fair amount of music theory in order to play the voicings properly.  Theory is at least necessary to transpose these voicings to other keys.  Jazz guitar players, by contrast, can actually function in the initial stages without as much music theory by just learning to move some shapes around the fretboard.  Of course, the more theory any musician knows, the better, but jazz pianists need to know some basic music theory knowledge even in the beginning stages just to function at all.

I think it is good to use the guitar freeboard analogy for jazz piano students, as they begin to see piano voicings as shapes.  These intervallic shapes can be moved around on the keyboard as you transpose them to other keys .  It’s important to note both the intervals and the numbers of how each chord tone relates to the root of the chord.  Knowing the intervals and the numbers of the chord tones helps you transpose these “shapes” to other keys.

All of the numbers relate to the root of the chord.  1,2,3,4,5,6,7, and 8 form a major scale.  The b3rd, for instance, represents the 3rd note of the major scale lowered by a half-step.  Flats and sharps based on the numbers don’t necessarily mean that note is a flat or a sharp note (black key).  Depending on the key, a b3rd or a b7th can also be a white note.  All of this can be confusing to a beginning jazz piano student, and so it’s worth noting that the numbers represent the major scale based on the root (1) of the chord, with flats and sharps representing notes that deviate from that major scale.

Rootless voicings can also be difficult for beginning jazz pianists to conceptualize, partly because they don’t even have the roots of the chords they represent.  For that reason, I’ve taken to teaching Bud Powell style shells early on in a student’s development, introducing rootless voicings a little later after having some basic skills under their belt.

Nevertheless, these left-hand voicings are widely used today and  jazz pianists needs to know of their existence.  It’s helpful to think of them as intervallic shapes, similar to how a guitar player might think of their voicings.

These 5 shapes are the basis for other left-hand voicings.  These are some simple, basic rootless voicings, and I recommend that you take them and learn each voicing thoroughly by transposing it into all 12 keys.  A good rule of them for left-hand voicings is to keep the pinky (the lowest note) between C3 (the C below middle C) and C4 (Middle C).  Any lower and the voicings start to sound muddy on most pianos, and if you move your pinky higher Middle C, you (A) risk sounding too thin, and you (B) encroach upon the tessitura of where you would typically solo with your right hand.