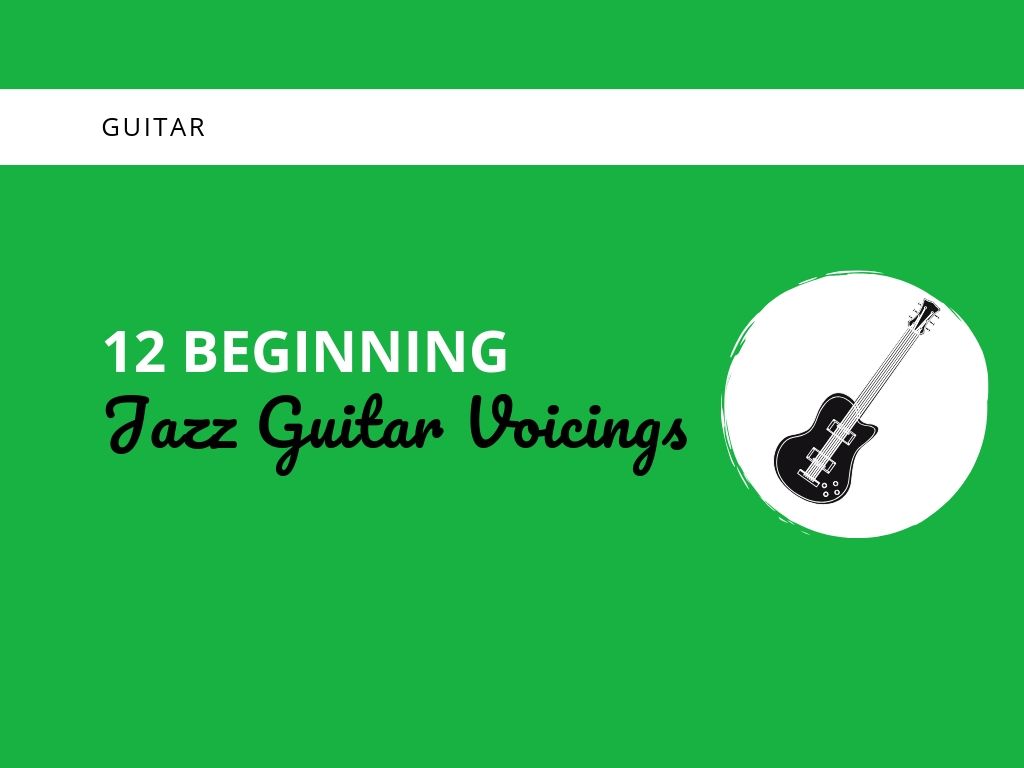 I’ve selected these 12 voicings after 10 years of teaching jazz combos and jazz lessons in the trenches.  Beginning jazz guitarists are often thrown into situations where they have to learn to comp changes quickly.  I’ve had 10 years of experience teaching jazz combos and teaching jazz guitar and piano lessons.  I’ve also spent several years as a consultant to other music directors, helping them train young rhythm sections.  I’ve found that I can get a guitarist comping in just a lesson or two by teaching these voicings.

After 10 years teaching in the trenches, I’ve boiled it down to 12 basic voicings for guitar and 2 basic voicings for piano.  These are normally among the first things I teach because they are important, versatile voicings and they help beginners sound pretty good relatively quickly.

It is important to note that there is WAY MORE to learn, but sometimes keeping things simple is best in the early stages.

These 12 voicings can be used to sound good over almost any tune.  You may miss some important nuances if you only know 12 voicings, but you can still get the basic gist of any tune with just these 12 voicings!  If you know these twelve voicings, it is possible to function on a basic level comping in a band!

A student should strive to learn MANY more voicings over time, but these 12 voicings are a great start for a beginning jazz guitar student.

In reality there are more than 6 types of chords, but these are 6 basic ones that show up frequently, and by limiting it to 6 we are trying to keep from overcomplicating things so as to not overwhelm the beginner!

Here are the 6 BASIC qualities, with common substitutions in parenthesis:

I have used “C” as the root for each chord, but it is important to realize that you can move the shape up or down the neck of the guitar so the same shape makes the same quality of chord starting on any chromatic note.   For instance, you can slide a C9 shape up the neck two frets and you’ll have a D9 instead of a C9.

You will notice that there is more than one way to play each of the 6 qualities.  The chords in parenthesis are basically interchangeable with one another in many situations.   You will find that some chords may be slightly different between the 6th string root and the 5th string root chords.  For instance, an Fmaj7 voicing (FACE) is used on the 6th string, whereas an Fmaj9 voicing (FACEG, although the 5th “C” is left out of the voicing below) is used on the 5th string.  Harmonically, the Fmaj7 and Fmaj9 voicings are so similar that it doesn’t matter which one you choose in many situations. Another example is that when a chart calls for a C7, you can substitute a C9 or a C13 instead!  A third example would be that if a chart calls for an Fmin7, you can substitute an Fmin9 voicing.

You can generally add the 9 to any chord, and sometimes even the 11 and/or 13.

Here are the 12 Voicings:

For example, if you wanted a Bb13, you can just take the C13 voicing start on the 6th fret instead of the 8th fret of the 6th string.

Another example is if you wanted a Dmin7 on the 5th fret, you can take the Cmin9 shape and move the root from the 3rd fret to the 5th fret of the 5th string, moving the shape of the Cmin9 voicing to the note “D.”