How to Comp On The Drums Like Elvin Jones 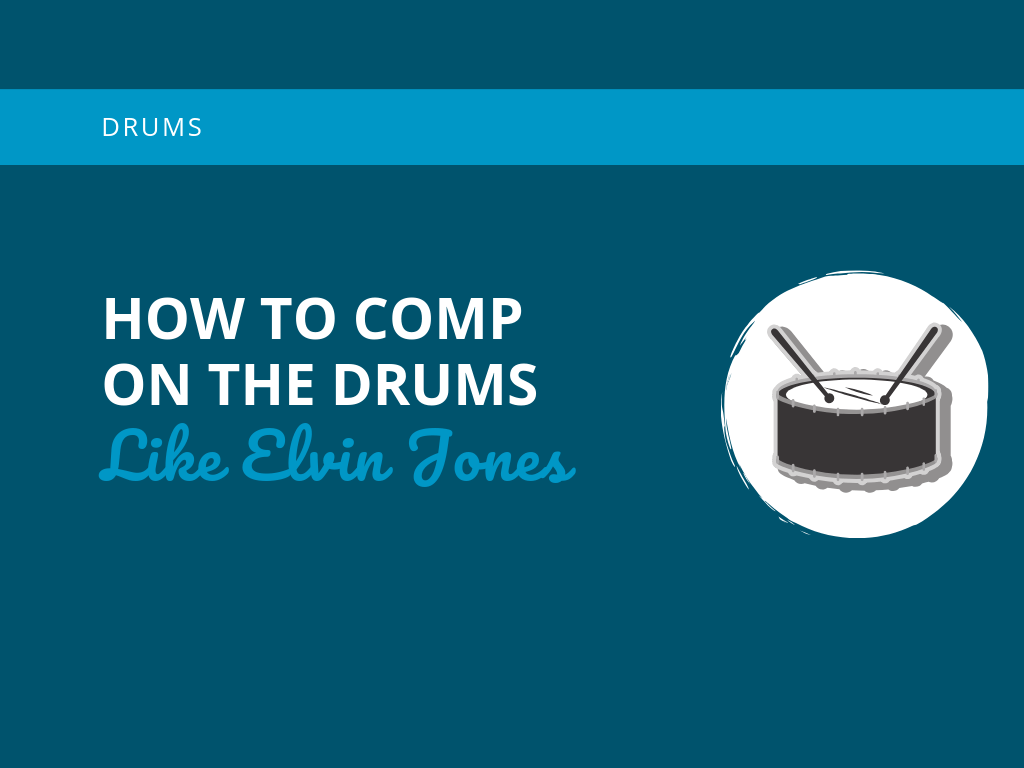 Elvin Ray Jones was born September 9, 1927, in Pontiac, Michigan. He grew up in a musical home of jazz musicians. Hank Jones and Tad Jones, both legendary and innovative musicians, are Elvin’s brothers. Obviously, this musical environment influenced Elvin to find his path to jazz and drumming.

Even though Elvin was already playing with great bands as early as the mid-50’s, He was not well known until the 60’s due to his association with the legendary saxophonist John Coltrane, who gave him the freedom to explore and find a unique voice.

The legacy of Elvin Jones is hard to explain with words. Bassist Ron Carter, in a documentary entitled “A Different Drummer”, said it best when describing the contribution of Elvin to jazz drumming:

If you do what Ron says, you’ll realize the jazz time-feel was changed forever.

In this lesson, I’m going to discuss and explain, briefly, some of the changes Elvin brought to jazz drumming. In particular, I’ll cover comping, the ride cymbal, and phrasing in general.

When analyzing Elvin’s drumming, the first thing to notice is his unique approach to the jazz ride cymbal phrasing.

Before Elvin, jazz drummers would have the tendency to stress beats 2 and 4 on the ride cymbal. Even though players would break the pattern and play more open, the accent would remain the same all the way.

Elvin kept the tradition but innovated upon it. It’s quite common to hear Elvin stressing the upbeats on the ride cymbal pattern.

This in conjunction with his comping would become one of his most important contributions. The ride cymbals and his comping ideas would work together perfectly creating a distinctive time feel and phrasing. We’ll discuss this later in the phrasing section.

Before Elvin Jones, drummers would use the swing 8th notes for creating their comping ideas. However, Elvin brought a missing piece to the equation. The middle triplet, which reconnected Jazz back to its origins in African drumming.

Elvin developed a comping language based mostly on runs of triplets, sort of floating within the time.

I’ll share with you some of the ideas I’ve gotten from him, which I consider his trademarks and musts for any drummer who wants to gets into Elvin’s approach.

Learn these ideas and move them around the set, add and move accents around and you’ll see how interesting they become.

In my search for developing a way to practice Elvin’s ideas and incorporate them into my playing, I discovered an exercise using Ted Reed’s Book, Syncopation For Modern Drummers, which allowed me to further develop those ideas and connect them.

The exercise is based on the classic long-short note orchestration system; short notes played on the snare and long notes on the bass drum.

Here is an excerpt from Syncopation, Ex. 1

If you would like to have a deeper explanation of the system, I recommend getting John Ramsey’s book, The Drummer’s Complete Vocabulary As Taught By Alan Dawson.

So, now that you understand that basic long-short system, my exercise is going to work on the same rules, but we are going to fill the space in between the swing 8th notes with the middle triplet on the snare with the left hand. And when the note is only a long note on the downbeat, will fill up with the last two triplets.

As you can see, the orchestration of long notes and short notes is the same, the only difference is the addition of the middle triplet.

This exercise is challenging, so be patient and practice it slowly. Break the reading into smaller pieces, like one or two bars phrases, and try to memorize it so you can create your own ideas based on the style of Elvin Jones.

Elvin was a master at placing accents in odd places. This device gave him the ability to create the illusion of complex rhythms and modulation simply by placing accents in uncommon places over long runs of 8th notes triplets or sixteenth notes.

The odd accent placing in his comping ideas and the ride cymbal stressed on the upbeats, would create a sheet of cross-rhythms interacting with each other at the same time.

Even though, nowadays, every drummer uses these devices to play jazz, when Elvin did 60 years ago it was innovative and not everyone would dig it. It is documented that many musicians at the time, didn’t like to play with Elvin that much. They couldn’t understand where Elvin was coming from, and his playing would clash with the tradition.

Another important aspect to consider when talking about Elvin’s phrasing is the placement of his ideas.

Elvin would normally start and finish his phrases on odd beats, like beat four or beat two. Sometime he would do it so often that it would create the illusion that the metric of the tune had changed.

You can practice phrasing placement by using the little phrases above and start on beat 2 or 4, or end the phrases in beat 2 or 4.

Elvin’s approach to the drum set opened a door to a new dimension, Elvin Jones changed the way drums were played, and his influence is present in every single jazz drummer on the planet.

It was a point of departure for a new generation of drummers who are taking Elvin’s concepts and pushing them even further.