The Pros and Cons of Being a Multi-Instrumentalist 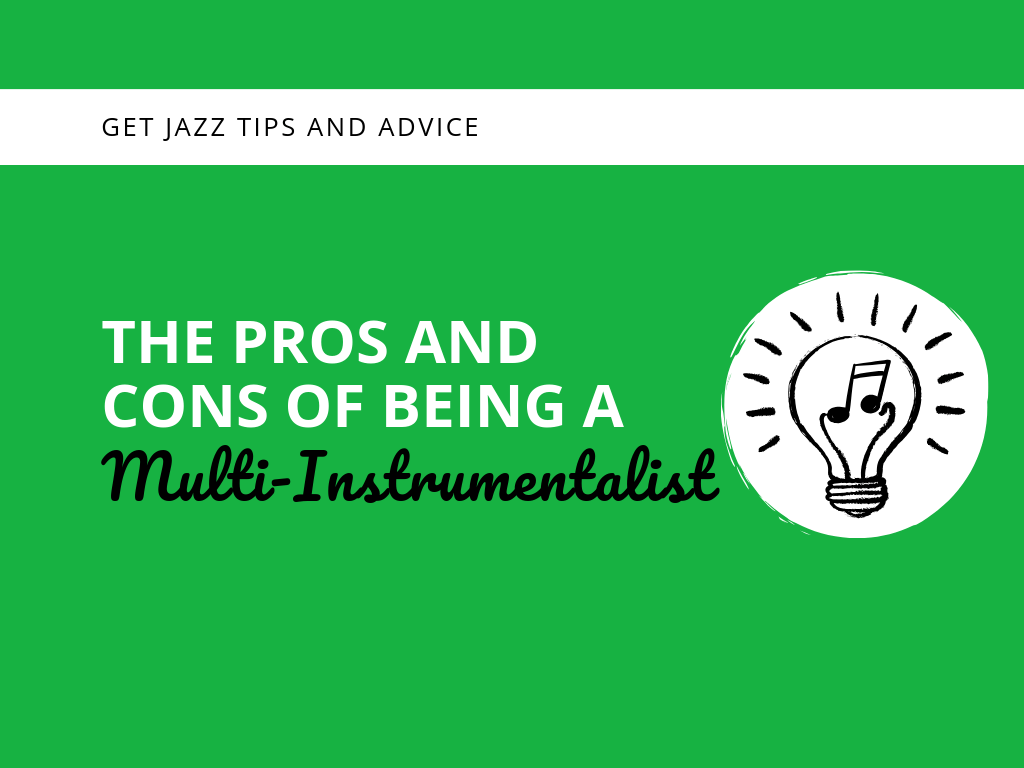 I received an email from an LJS subscriber a few weeks ago, which described a fairly common predicament in the music world. This musician was a multi-instrumentalist, and it seemed to be perplexing him quite a bit.

It perplexed him because he sensed that to excel as a jazz musician it would require some virtuosity, and virtuosity can be hard to attain when spread too thin. So he asked me what he should do. Should he give up working on the other instruments he plays, and focus on his main instrument, or should he remain a practicing multi-instrumentalist?

What this musician seems to fear is being a jack-of-all-trades. He appears to enjoy playing a lot of instruments, but fears that this will ultimately exclude him from the elite. After all, there are thousands of musicians who are dedicating 100% of their time to one instrument. How could he keep up?

Of course, it is hardly my place to give a musician in this predicament a black and white answer.

Personally, I am not a multi-instrumentalist. I find that my guitar beats me up quite enough. And while I’ve dabbled with other instruments, I’ve never studied one outside of some basic piano skills. Why? Because my desire is to be a great guitar player.

I hope you queued into that: my desire.

Let me tell you about a good friend of mine.

I’ve known this guy for many years. He’s not only a good friend but a fellow jazz die-hard. He knows what it takes to play jazz as well as anyone. His first instrument was the piano, and to this day that is the instrument that he is most called upon to play. He’s a great piano player. A talented guy.

But for as long as I have known him he has been cursed with what I like to call a “musical identity crisis.” Indeed, he is a multi-instrumentalist. But it goes deeper than that.

He’s on more than one occasion decided to abandon his identity as a piano player for something else. I’ve watched him become a guitar player, an organ player, a singer song writer, then back to a piano player, and back through the list again. It’s not just that he plays all of these roles, he’s wanted to change the identity of who he is musically on more than one occasion. He knows he’s a great piano player, and that’s what he is known for, but he’s often felt the urge to abandon that identity almost completely. He has a musical identity crisis.

I’ve spent many hours over the years with this friend, hearing him out on why he wants to give up his identity as a piano player. In the past, it has perplexed even me, especially because I cannot relate to his predicament. But what I grew to understand is that every time he was having a musical identity crisis, it was indeed a crisis. It bothered him. It stressed him out.

Why did this bother him so much? For the same reason it bothered the musician who emailed me. He didn’t want to get left behind.

His desire to be extraordinary, and play multiple instruments or change his focus to another were at odds with each other. At least in his mind.

My friend is also now a band teacher at a charter school. Doesn’t that make a lot of sense? He has the capability of teaching kids how to play their instruments together because he has experience with almost all of them. I know I would struggle big time to do his job.

Is there a right or wrong answer to whether or not to be a multi-instrumentalist? Absolutely not. It’s all relative. That is why earlier I said my desire is to be a great guitar player. I quite simply don’t have the desire to be anything else, and therefore I don’t spend much time on other instruments. My friend, on the other hand, does have that desire.

So if you are having a hard time deciding whether to be a multi-instrumentalist or focus on one, I certainly won’t be the one to answer that for you. But what I can do is list some pros and cons of each. Perhaps this will help you identify what it is that you want to get out of music. Ultimately this is the question you need to ask yourself.

Focusing on one instrument

You will become exceptional at one instrument.

This is fairly obvious. If you choose to dedicate all of your time to one instrument, the chances are that you will improve much faster than if you were spreading your practice time out over multiple.

Your musical identity will be tied to one instrument.

What I mean by this is other musicians in your social circle will think of you as a good sax, piano, drummer, guitar player…etc. Why is this important?

If someone needs a bass player for a gig, they usually will look into their contacts of someone who identifies as a bass player, not necessarily someone who plays a bunch of instruments, one of which happens to be bass. Having a single instrument identity implies some degree of expertise, be it legitimate or not.

You are stuck with that instrument.

If you decide you want to dedicate yourself to one, you better really like it. You have to hang in there through thick and thin, for better or for worse. Because if you want to be exceptional at it, you will need to be loyal.

Your gigging opportunities will be limited.

This is especially true if you limit yourself to only one genre of music (that’s a related but different topic). I’ve seen many multi-instrumentalists who are decent at several instruments snag gigs I could never get.

You’ll have a lot of musical perspective.

This can be a huge advantage. If you play multiple instruments, it means you will understand where all of those instruments come from musically. This means you can understand other musicians better, and what role you should play on the bandstand. In the case of my friend, he functions well as a band teacher because he has a lot of musical perspective and multi-instrument competence.

If you are an acceptable player, you will likely have more options, especially if you cross genres. For example, you may be able to play bass in a rock band and piano in a jazz group. If you can make yourself know as a musician that wears different hats well, this can be a serious advantage. There will be more opportunities.

You’re not likely to be a top call player in competitive circles.

It depends on where you live and what your music scene is like, but if you spread out your practice on more than one instrument, it’s hard to keep up with those that focus on one. In a competitive music scene, you are not likely to be a top call player. It just won’t be your identity.

You’re not likely to be extraordinary on all of the instruments you play.

This piggy-backs off of the last con. If you are spreading out your practice time, it’s tough to break some of the barriers you could if you were only focusing on one.