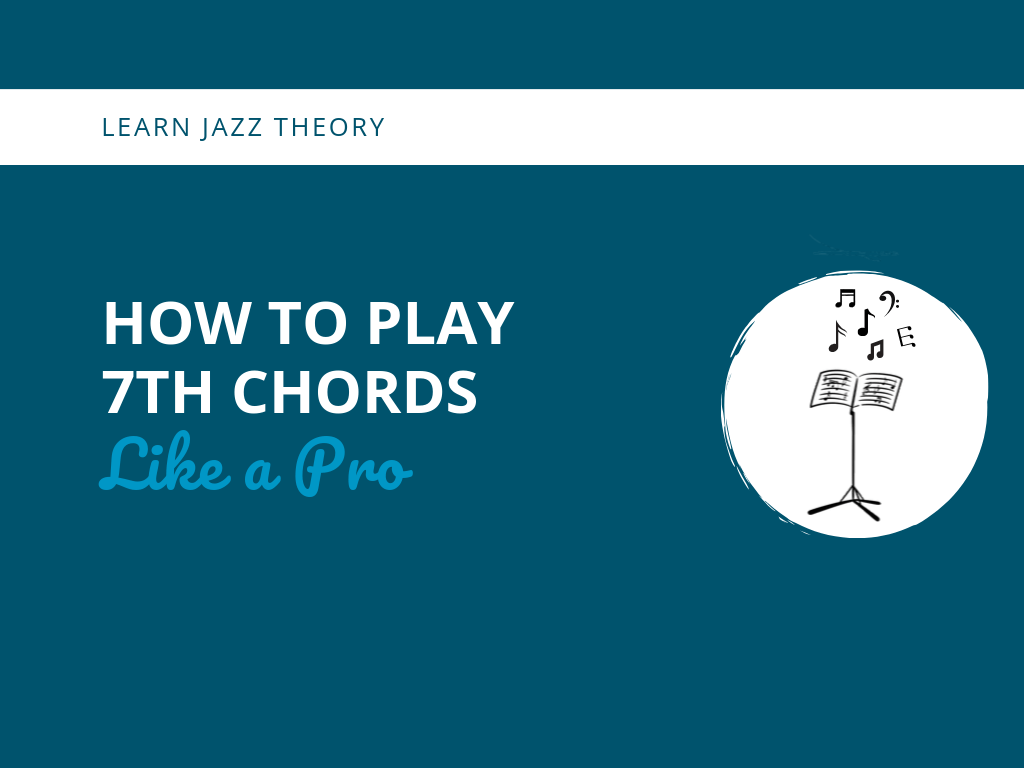 One of the characteristics of jazz standards are the lush, colorful chords that populate
their harmonies. Jazz musicians often use chords that offer more harmonic information
than simple triads. These basic types of chords are called 7th chords.

What’s a 7th chord?
A 7th chord is a triad with the 7th tone of its corresponding
scale stacked on top.
Basic formula: Root-3rd-5th-7th (3rd, 5th, or 7th altered
depending on quality)

In this lesson, I’m going to go over the basic 7th chords, give you all of the formulas and make sure you know them forwards and backward.

Before we go into the 7th chord formulas, I want to make sure you know what inversions are.

In my mind, it’s not enough to simply know the root position formulas (the chord built from the root note up), you need to also know how to construct chords starting on the different chord tones.

For demonstration sake, let’s work with a basic major triad. A triad has only three notes (Root-3rd-5th). Here is a C major triad:

Because triads consist of only three notes (tri), there is only a root position and two
possible inversions: 1st Inversion and 2nd Inversion.

1st Inversion means the 3rd will be the bass note. What’s the next note up from the
root? The 3rd. So now the triad will be structured 3rd-5th-Root. Essentially, we just shifted the notes into a different order.

2nd Inversion means the 5th will be the bass note. The next note up from the 3rd is the 5th. So now the triad will be structured 5th-Root-3rd.

When we talk about 7th chords we are adding an extra note, the 7th. Now we have four chord tones to work with, which means we have an extra inversion. That would be 3rd inversion which would simply mean the 7th becomes the bass note and you stack the other chord tones on top.

Regardless of whether you play a chordal instrument or a melodic instrument like saxophone, you need to know how to build 7th chords and their inversions. After all, when it comes down to becoming a great jazz improviser you need to be outlining chords in your solos. Knowing these chord tones forwards and backward will set you up for success.

There are 5 qualities of 7th chords: major 7, dominant7, minor 7, half-diminished, and diminished 7. Let’s start with the major 7th.

Same as a major triad but with the 7th scale degree stacked on top. Pretty simple right? If
you know your major scale it’s simple to pick out where all of the chord tones come from.

Of course, there are also inversions to all of the major 7 chord qualities. Because there are four chord tones, we end up having three inversions. Here is the Cmaj7 notated in Root Position, 1st Inversion, 2nd Inversion and 3rd Inversion.

Formula for a dominant 7 chord: Root-3rd-5th-b7

Same as a major 7 chord but with a b7. Dominant 7 chords play a huge role in jazz and
the blues so these are important chords to have down solid! This chord comes straight
out of the Mixolydian scale.

Like the minor triad, the 3rd is flatted. And like the dominant 7 chord, the 7th is flatted.

Formula for a Half-Diminished chord: Root-b3-b5-b7

Take a minor 7 chord and flat the 5, and you have what we call a half-diminished chord.
This chord is also commonly known as a minor 7(b5) chord. We can draw these chord
tones from the Locrian scale.

When you stack these scale degrees on top of each other you get a Cmin7(b5): C-Eb-Gb-Bb.

Formula for a Diminished 7 chord: Root-b3-b5-bb7

That’s right! If you take a half-diminished chord and flat the 7th chord tone twice, you get
a fully diminished 7 chord. I suppose it makes the meaning of half-diminished all that
more clear. 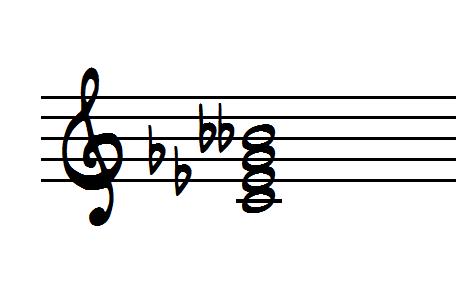 Where to go from here

If you have these chords down and can play the arpeggios of the root position, 1st inversion, 2nd inversion, and 3rd inversion, you’ll have a basic chordal foundation for your jazz studies.

After this, you should learn about 7th chord extensions and alterations. These are the color notes you can add on top of these basic 7th chords.

You also will want to practice improvising over these chords individually. We have some great backing tracks to help you do this called Jazz Chord Workouts.

If you aren’t entirely sure what notes you can play over these different kinds of chords, then you’ll want to learn which scales you can use over them. Scales aren’t musical by themselves, but if you think of them as “pitch collections” they can be used as a way to map out which notes you can use to create melodies.

Lastly, our eBook Zero to Improv goes into all of this in much more depth, including exercises to help you work through 7th chords and connecting them together. If you want to dig into this material further, this will be a good resource to use.

Facebook
Twitter
Previous article3 Polyrhythmic Exercises Every Jazz Musician Should Master
Next articleLJS 80: Chord Progressions and How to Identify Them By Ear