Using the Bebop Scale on Days of Wine and Roses 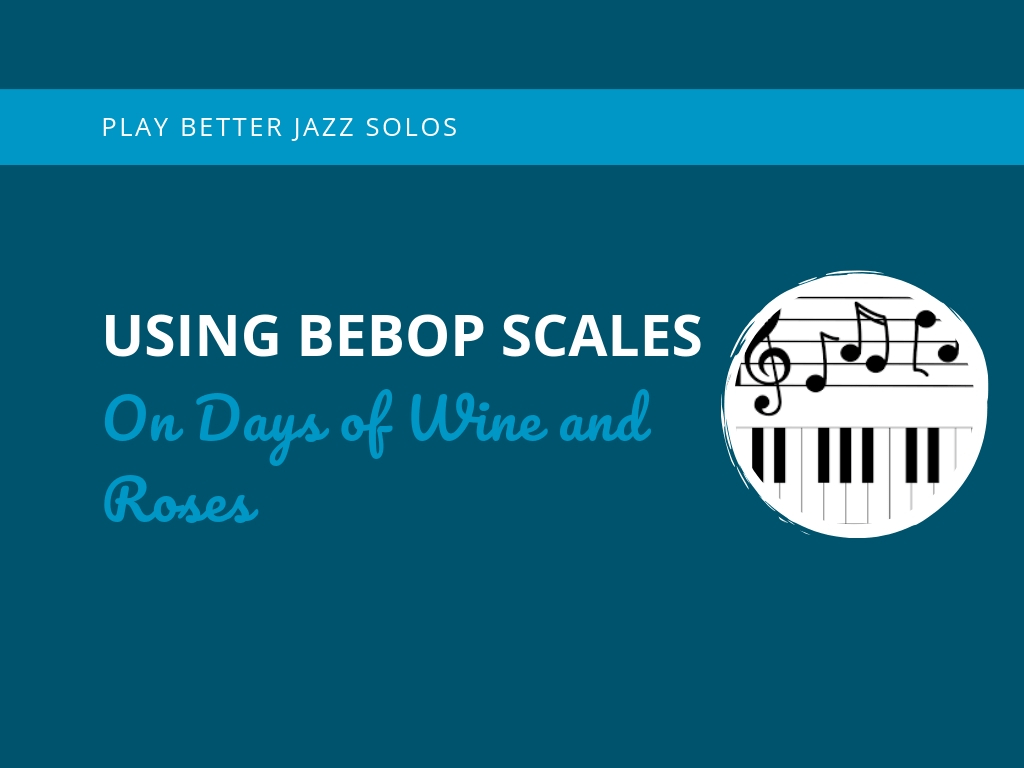 Days of Wine and Roses is a bittersweet tune with heart-wrenching lyrics about nostalgia and the fleeting nature of happiness and youth. It was written by American film and popular song composer Henry Mancini for the 1962 movie of the same name.

Many jazz musicians have since performed and recorded the song, and now “Days of Wine and Roses” has become a commonly-played and important jazz standard. Singer Billy Eckstine made an early popular recording of the tune.

Other classic jazz recordings of this tune include those made by Frank Sinatra on his 1964 album Academy Award Winners, Ella Fitzgerald and Joe Pass on Easy Living (1986), Wes Montgomery on his 1963 album Boss Guitar, and Bill Evans on his 1979 album Affinity.

This lesson is an excerpt from The Jazz Standards Playbook Vol. 2, which is an eBook and companion course that goes through in-depth studies of 10 jazz standards, including Days of Wine and Roses.

Bebop scales seem to have appeared as a musical concept in the first few decades after bebop emerged as a distinct jazz style, which occurred around the time of the Second World War in the late 1930s/early 1940s.

Pioneering jazz pedagogues David Baker and Barry Harris are the two musicians most commonly credited with the development of the concepts surrounding bebop scales.

It is important to note that the idea of bebop scales arose after bebop had already been developed as a style of jazz. As is often the case with theoretical ideas, the theory arose after the practice it tries to describe was already well established.

To my knowledge, there isn’t much evidence that the idea of “bebop scales” existed when Charlie Parker, Dizzy Gillespie, Charlie Christian, Bud Powell, Thelonious Monk, and the other musical pioneers were developing the unique new style of jazz which we now call bebop.

Bebop scales were theorized after the fact to try to explain common melodic gestures that recur frequently in bebop-style melodies and improvised solos.

Bebop solos notably feature a lot of chromatic or non-diatonic notes, meaning pitches that are not included in the key of a given song or chord progression.

So scholars, theorists, jazz musicians, and jazz pedagogues have developed theory systems, such as bebop scales, in order to make it easier to study, learn, and talk about bebop’s musical vocabulary.

How do bebop scales work?

Bebop scales are essentially major, minor, and dominant scales with one or more added “passing tones,” which are extra “chromatic” or “non-diatonic” notes.

It is important to note that in theory and in practice, bebop scales are generally thought of as descending scales, meaning they make the most sense, sound the best, and are most often used when playing descending stepwise melodies.

In other words, bebop scales can help you to start to think more melodically (or “linearly”) as opposed to harmonically (or “vertically”).

Although arpeggiating chords and outlining harmonic guide-tones are useful approaches all aspiring jazz musicians should master, it will give you even more ideas and greater flexibility as an improviser if you master bebop scales as well.

One of the main reasons bebop scales are especially useful is that they allow you to get all of the chord tones to align with strong beats when playing a stepwise melody.

Since most scales derived from the Western “church” modes have 7 notes before repeating the tonic pitch, they are rhythmically asymmetrical when played as stepwise 8th note lines.

Practically, this means that if you play a descending 7-note scale in 8th notes, the chord tones associated with that scale will not always fall on the downbeats.

By adding a passing tone to a scale, you now have an 8-note scale, which is rhythmically symmetrical – meaning you can play the scale ascending or descending in 8th notes as a stepwise melody and have all the chord tones line up with the downbeats.

By making all the chord tones land on downbeats, you will be able to clearly communicate the harmonic progression of a tune without arpeggiating chords, since the ear tends to place more importance on notes that fall on rhythmically strong beats.

Let’s go over the two most common bebop scales:

The major bebop scale is essentially a major scale with an added passing tone: the b6.

So since Days of Wine and Roses is in F major, let’s use an F major bebop scale.

Another common bebop scale is the dominant seventh (or Mixolydian) bebop scale.

This scale is generated by adding a passing tone between the b7 scale degree and the root.

The dominant seventh bebop scale is also useful over ii minor chords when you’re playing ii-V-I’s. You can play one scale over both the ii and the V7 chords.

In other words, just treat the ii chord like a V7 chord in the same key, which works since both modes come from the same parent scale and therefore comprise the same pitches.

For example, G Dorian minor (G-7) and C Mixolydian (C7) have the same notes, since both are derived from their parent scale: F major.

There are also a few other common passing tones you can use with the dominant bebop scale.

Here’s what a dominant 7th bebop scale looks like with 3 passing tones (in descending form).

As important as it is to try to get chord tones to fall on strong beats, it’s also important to create rhythmic variety, unpredictability, and surprise while improvising.

We can deliberately practice incorporating rhythmic variety into our solos by consciously varying which part of the bar we start and end our melodic phrases.

This is especially a good idea when we’re playing a lot of running 8th note lines, because 8th note lines can become monotonous if they are rhythmically predictable, regardless of how melodically or harmonically interesting they may be.

An obvious starting point would be to play an 8th note line that starts on beat 1 of a measure and ends on beat 1 of the next measure.

However, if all of our phrases moved from beat 1 of one bar to beat 1 of the next bar, our solos would lack variety and sound very predictable, static, and boxy.

So we can make a point of starting and ending 8th note lines elsewhere.

In this etude, we’ll make a point of starting every 8th note line on a different part of the beat, and we’ll make sure to use every part of the measure by the end of the etude (beats 1, 2, 3, 4, as well as every upbeat).

This will also give us the chance to practice playing bebop scales in different forms and starting on different scale degrees.

Note: the bebop scale isn’t used over every chord.

This etude naturally employs an exaggeration of chromaticism given the use of the bebop scale.

Here’s a basic piano recording so that you can listen while you follow along.

This etude is highly chromatic and sometimes you may feel some sounds are “out.” But note that these sounds always resolve to “in” notes and strong chord tones.

Look through the etude and see if you can identify where bebop scales are being employed.

If you’re interested in understanding how the chord progressions work and want a more in-depth study of this standard, check out The Jazz Standards Playbook Vol. 2.

Days of Wine and Roses is a great tune to explore these two concepts and much more.

Facebook
Twitter
Previous article
Improvising Over the LJS Podcast Theme Song (feat. Listener Improvisations)
Next article
How to Learn a Jazz Standard (and Not Forget It)