An Interview With Gilad Hekselman 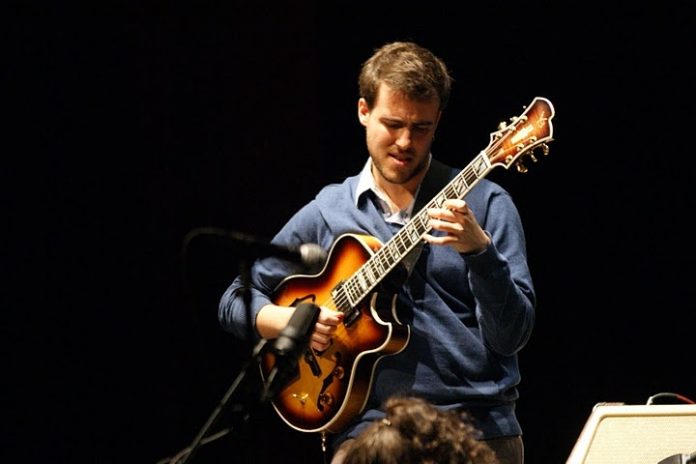 Gilad Hekselman has been developing a reputation as one of the most promising guitarists in New York since his arrival in 2004.  In only a few years this native Israeli has shared the stage with some of the greatest artists in the New York jazz scene including, Chris Potter, Mark Turner, John Scofield, Anat Cohen, Ari Hoenig, Esperanza Spalding, Sam Yahel, Jeff Ballard, Gretchen Parlato, Avishai Cohen, Jeff “Tain” Watts, Tigran Hamasyan, Aaron Parks, and Greg Hutchinson.   He has played all of the major jazz clubs in New York City including the Blue Note, The Jazz Standard, Dizzy’s club, and Smalls.  He is constantly touring world-wide and has played most major jazz festivals including Montreux, North Sea, Montreal and San Francisco.

Gilad recently took some time to answer some questions for us here at LJS:

GH: Same ones as before plus Keith Jarrett, Gonzalo Rubalcaba, Claire & The Reasons, Ray Charles, Chopin, Ali Farka Toure, Marcus Gilmore, Mark Turner and many of my contemporaries.

GH: When I realized that I want my music to have the same effect as what my favorite music has on me – make people feel something.

GH: I have many. Smalls would have to be on on there. Still waiting patiently to play at the Village Vanguard.

LJS: What is the state of jazz music today and where do you see it going?

GH: That’s a broad question. I try not to deal so much with genres. I just try to make the most beautiful music I can with the tools that I have.

GH: Heart, ears and feet over brain. If it doesn’t make you feel something – what’s the point? That’s what I keep telling/asking myself as well…

GH: I’m still touring quite a bit. Just made a new recording with my band featuring Joe Martin on bass, Marcus Gilmore on drums and Jeff Ballard is sitting in too. Pretty excited about that one!

GH: I didn’t decide, but it was a natural route from playing rock to prog-rock to fusion to jazz as a kid. Now I just try to play what I hear and feel and it seems like it falls under the ‘jazz’ category.

GH: I started piano at 9.  Went to an arts high school in Tel Aviv called Thelma Yellin, then to New school in NYC. Constantly learning still from my colleagues and sometimes through private lessons.

LJS: In your opinion, what are the most enjoyable aspects and challenging aspects of being a musician?

GH: The challenging: traveling (as in checking in, sitting for hours, losing baggage, schlepping…)

GH: Paris would be one of my top ones. But many, many other beautiful and memorable places. The list is huge.

GH: It’s different every time.  Always with patience and listening to what the song needs.