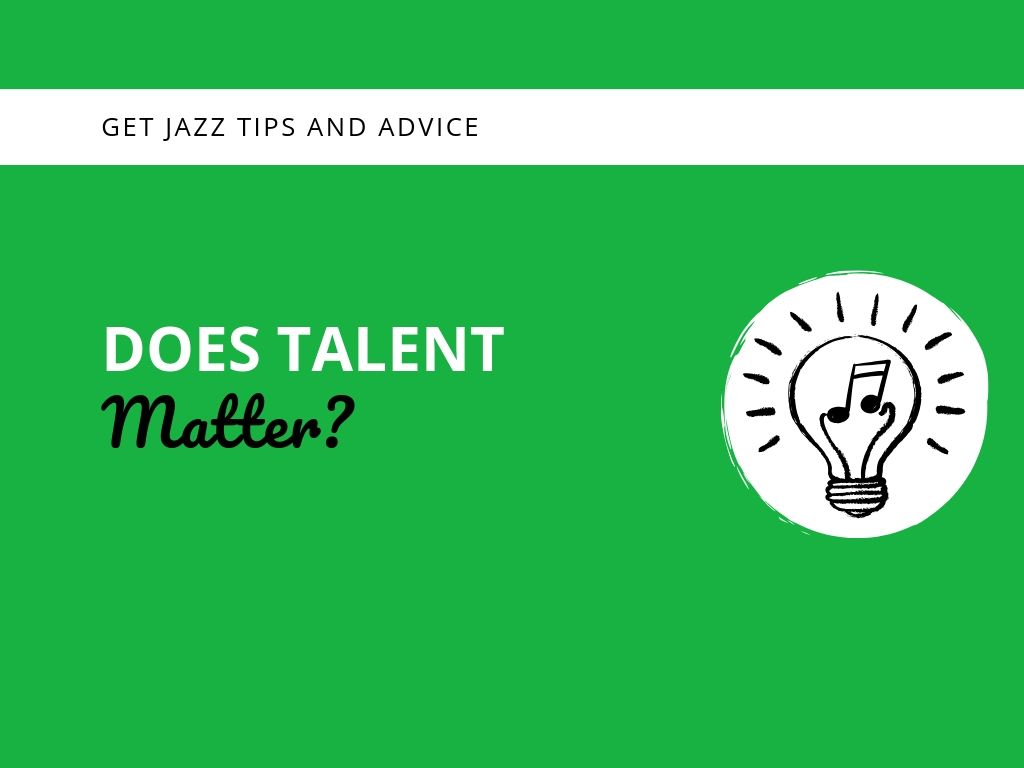 A friend asked me the other day:

Now, I find questions like this one of those argumentative things people say to each other when they’re out drinking and run out of anything more interesting to say to each other. But it’s a kind of “brain worm” (cousin of an “earworm”) too. Once spoken it lingers, like an unwelcome dinner guest who won’t go home.

Although my friend’s nonfiction has been published, he had decided to quit writing (both fiction and nonfiction) because, after several years of hard work and rewrites, his novel has yet to find a publisher. His fiction would never get published, he said, because he just wasn’t talented enough, regardless of how hard he worked at it.

I disagreed with him. At one point in our discussion he said that if a less talented person could catch up with someone who had a genuine gift for their art form through hard work alone, it would mean anybody could sing like Frank Sinatra or play the saxophone like Michael Brecker if they practiced hard enough. “Some people can just do things that others simply can’t,” my friend announced. (Ironically, Brecker, widely held to be the most influential tenor saxophonist of his generation, was asked in an interview not long before he died, “What does it feel like to be the king of the tenor saxophone?” To which Brecker reportedly replied, “I don’t know, you’d better ask Jerry Bergonzi.”)

There’s an appealing superficial obviousness to my friend’s observation, but I don’t buy it. I work with writers and musicians every day; I see the “talent” in my teenage son and I know, for that talent to mean something, the hard work he must choose to put in daily into mastering not just the violin but jazz itself. And I see the fulfillment and pride of achievement he feels when he performs well and is recognized for it.

The observation that some people can do some things better than others is why I quit playing music 30 years ago. I did it for a number of reasons, but the truth was I was in awe and also despondent of things friends did musically, many of them great players, that I could not. My friend told me he decided to quit writing because of that story, which I had told him casually over lunch some years before. But he wasn’t paying attention to the fact that when my son started playing the violin, I started practicing once more and found I enjoyed it so much I eventually started playing in public again.

My friend’s view of talent as some magic gift assumes that being the best singer, or the best piano player is synonymous in some ways with destiny. But it’s truer to say that some people have, for example, innately better hand-eye coordination than others. But so what? It’s why we can get into (somewhat pointless) beer soaked arguments about who’s the better jazz guitarist – George Benson or Pat Martino. It’s all just so subjective. What is true, I think, is that every artist or performer has a responsibility to develop and refine a uniqueness of vision that makes them special, regardless of whether or not others appreciate that vision. But saying it is one thing, and living it another.

In his book Outliers, Malcolm Gladwell cites a study done in the 1990s by K. Anders Ericsson (Dept. of Psychology, Florida State Univ.) on music students. In true British tabloid-press fashion, Gladwell overbroadly concluded from the report that elite musicians averaged 10,000 hours of practice each, while the less able only practiced 4,000 hours. It was the hard work that did it, was the message.

But this conclusion was disputed as simplistic by Ericsson in a letter to the NY Times. Ericsson’s letter made a better, subtler point:

Our paper found that the attained level of expert music performance of students at an international level music academy showed a positive correlation with the number of solitary practice hours accumulated in their careers and the gradual improvement due to goal-directed deliberate practice.

In other words, the most accomplished students didn’t just practice for hours on end in order to get better, they used that time to focus on mastering technical skills designed to improve performance and express their creativity; they developed their skills using external rewards as motivation, such as pay, or concert performances; and they participated in any kind of practice that explored their various skills and was inherently enjoyable, like jamming/playing with other people. So, according to Ericsson, it’s not talent, nor even endurance of long hours put into mastering your craft that counts, but what you practice that is so important. It’s also true that at some point fairly early on, true craftsmen and women usually fall in love with practicing to the point where it becomes a kind of daily meditation.

If my friend was right, then in Ericsson’s study the “super talented” should have risen to the elite level with less effort than their peers. No one did. In fact, the data showed a direct correlation between hours of correct practice, and achievement. Wise journeyman study wins out, it seems.

An example of all this can be glimpsed in the sad story of the (fairly unknown) brilliant jazz guitarist Billy Bean, who in the 1950s could play the guitar pretty much the way Charlie Parker played the alto sax. Bean was consumed by the demon of alcoholism to the point that he gave up early on a career in music that would have likely matched Wes Montgomery’s or Joe Pass’s, if you follow these things. For the non-musical it’s a bit like Picasso deciding he’d rather drink than paint. So what good does talent do for you under those circumstances? That said, I know Billy Bean must have worked hard at mastering his instrument when he was young, and studied with Dennis Sandole, the teacher who also taught John Coltrane. But Billy famously told a friend in retrospect of his early recordings, none of which he liked, “Oh, I was just goofing off.” But that is belied by one interesting kitchen recording he made of a rehearsal for an upcoming record date, when halfway through improvising on a tune he makes a mistake for four bars. What we hear, preserved for all time, is the genuine belly laughter of a likely sober young man delightedly doing the thing he loved to do most and best in the world, even when it doesn’t work out quite how he wanted it to.

The best definition of talent I ever came across was by the iconic jazz drummer Art Blakey, an equally great spotter and incubator of talented young jazz musicians. He said talent is the speed with which someone learns something. This instantly resonated with me. It’s the least elitist approach to talent, and the one that most emphasizes the need to do the work, rather than just rely on a “magical” ability that one is born with. Because the truth is, we are all born with skill sets buried in our DNA. Just as “Boo” said, some people pick up on that a lot faster than others, and some find it easier than others and progress faster as a result. But it’s all about a willingness to do the work.

Implied in my friend’s question is another that sets my teeth on edge — what do we mean by “success”? Financial success and fame require of the artist an overtly commercial sensibility that may appeal to the masses e.g., Justin Bieber, or Lady Gaga, but artistically in terms of talent are they really comparable to, say, Frank Sinatra or Rene Fleming or Aretha Franklin in their prime? Does it matter? And is that commercial sensibility i.e., a talent to sometimes cynically read what others want in entertainment and give it to them, sometimes pandering to the bottom line at the expense of real creativity? Don’t get me wrong, God knows there’s nothing wrong with making lots of money as a performing artist if you can. I would if I could as long as I could live with the music.

But I believe, even now, art should not be just about money, because inevitably then it becomes shaped by a fear of offending people. It makes sense to me that art has to be intellectually and emotionally challenging, because it attempts to ask interesting questions and make us think differently about the world we live in. So it’s likely to have a small audience at first, which will hopefully grow over time. We hope, further, that audiences will enjoy our work enough to look to see if there is more by us. Once in a while something may catch unexpectedly, and a new phenom is born from base clay, but you can’t really plan for that.

I’d argue that artistic success is true admiration from one’s peers. It’s hard won and not often bestowed on the popular (though there are obvious exceptions). Charlie Parker, for example, considered one of the greatest jazz musicians of all time, was not hugely popular among audiences at the time. Louis Armstrong had to completely reinvent himself from the hip “young lion” of Weatherbird and Struttin’ With Some BarBQ, to the entertainer famous for his role in the movie High Society, and Hello Dolly. But their art has remained relevant over time, a great test of good art.

In the end, I think talent is about the determination to discover who we are, and what we want to say. It is, what it is, nothing more or less. So the real challenge is to say something unique and honest, and say it with grace and energy. After that, it’s in the lap of the gods whether or not others connect with it.

There is no separating talent from the other qualities, it’s just one piece of a complex puzzle. And at some point, becoming the “best” at whatever you do becomes replaced by a realization that talent is really about our commitment to undertake an inner journey and share some of the treasures we find.

And I’m pleased to report my friend reconsidered his decision not to write any more, and has just finished the second draft of his new novel.